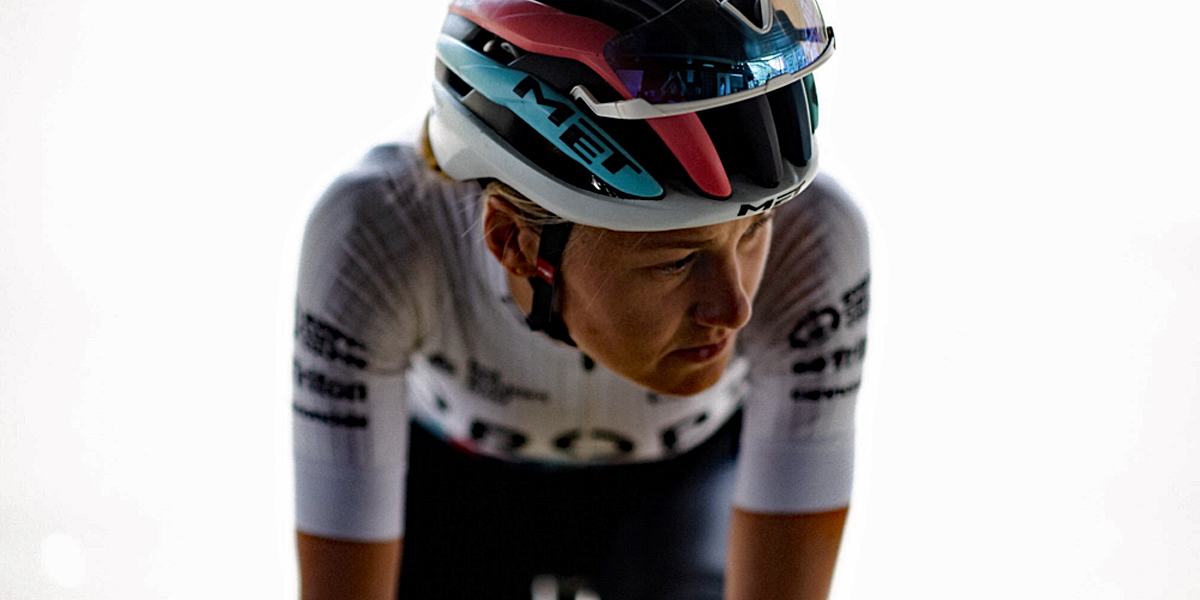 Rider Interview: The Olympic road events are over, but the action has moved over to the Tokyo velodrome. British rider, Joss Lowden, is on Team GB and recently set a new (unofficial) hour record. Ed Hood caught up with her in Tokyo. 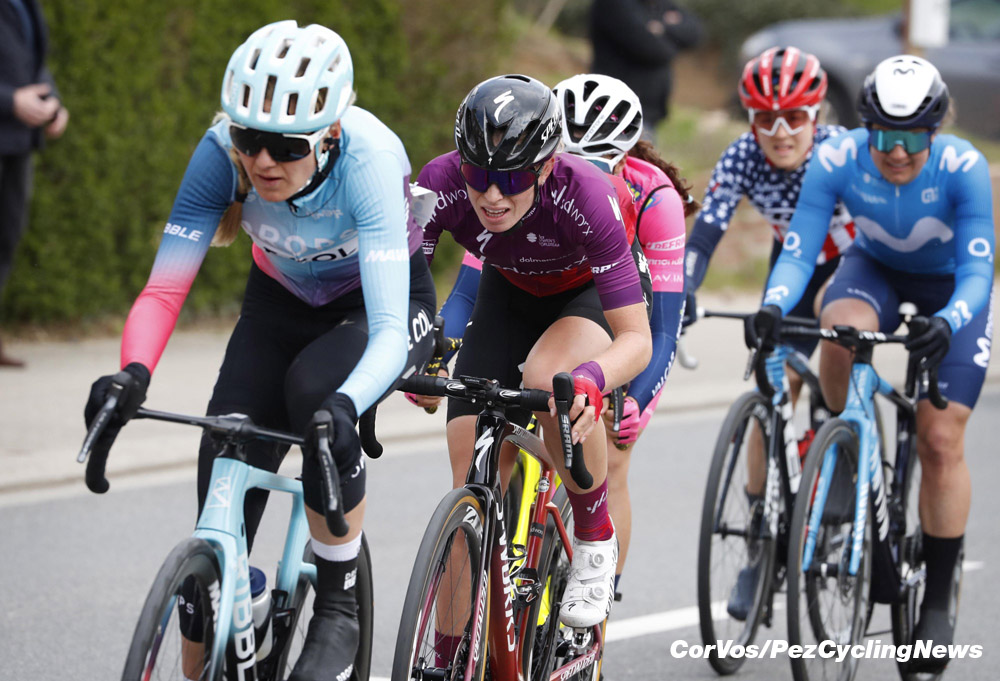 We all know that the Men’s World Hour Record Holder is Victor Campenaerts of Belgium with 55.089 kilometres – albeit shy of Tony Rominger’s 55.291 kilometres set on a bike which only fails to meet current criteria because the front wheel was an inch smaller than the rear, but that rant’s for another day. 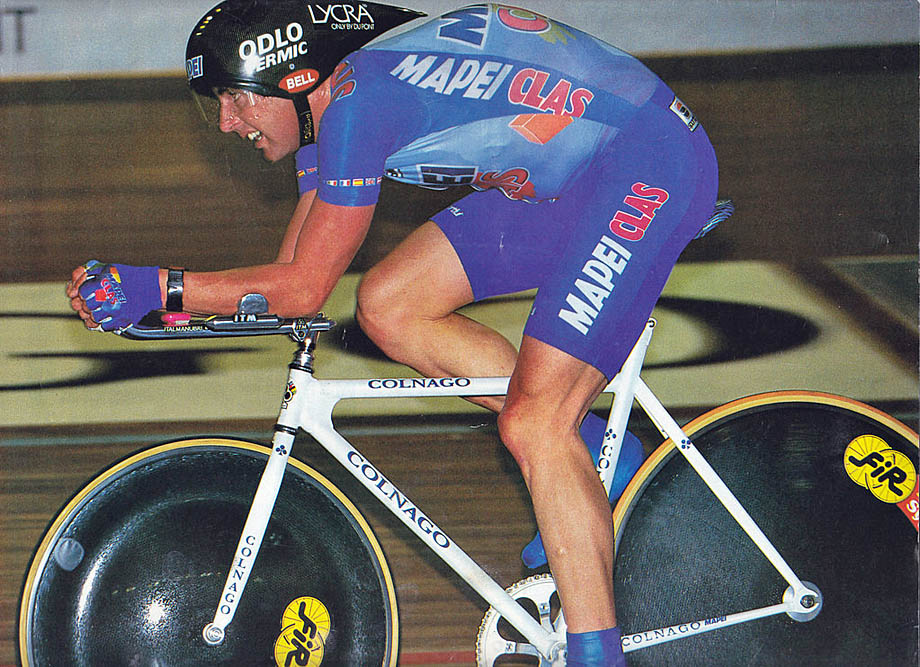 But how about the women’s record? It’s been held since 2018 by Italy’s Vittoria Bussi with 48.007, she added 27 metres to US rider, Evelyn Stevens 2016 distance on the rapid high altitude Aguascalientes Velodrome in Mexico. BUT a certain British rider, Joss Lowden who rides for Drops Le Col, on the sea level Derby track in England rode 48.160km – 153m further than the current distance in an ‘unofficial’ one hour ride witnessed by her partner, fast man, Dan Bigham and the legend that is Sean Yates. 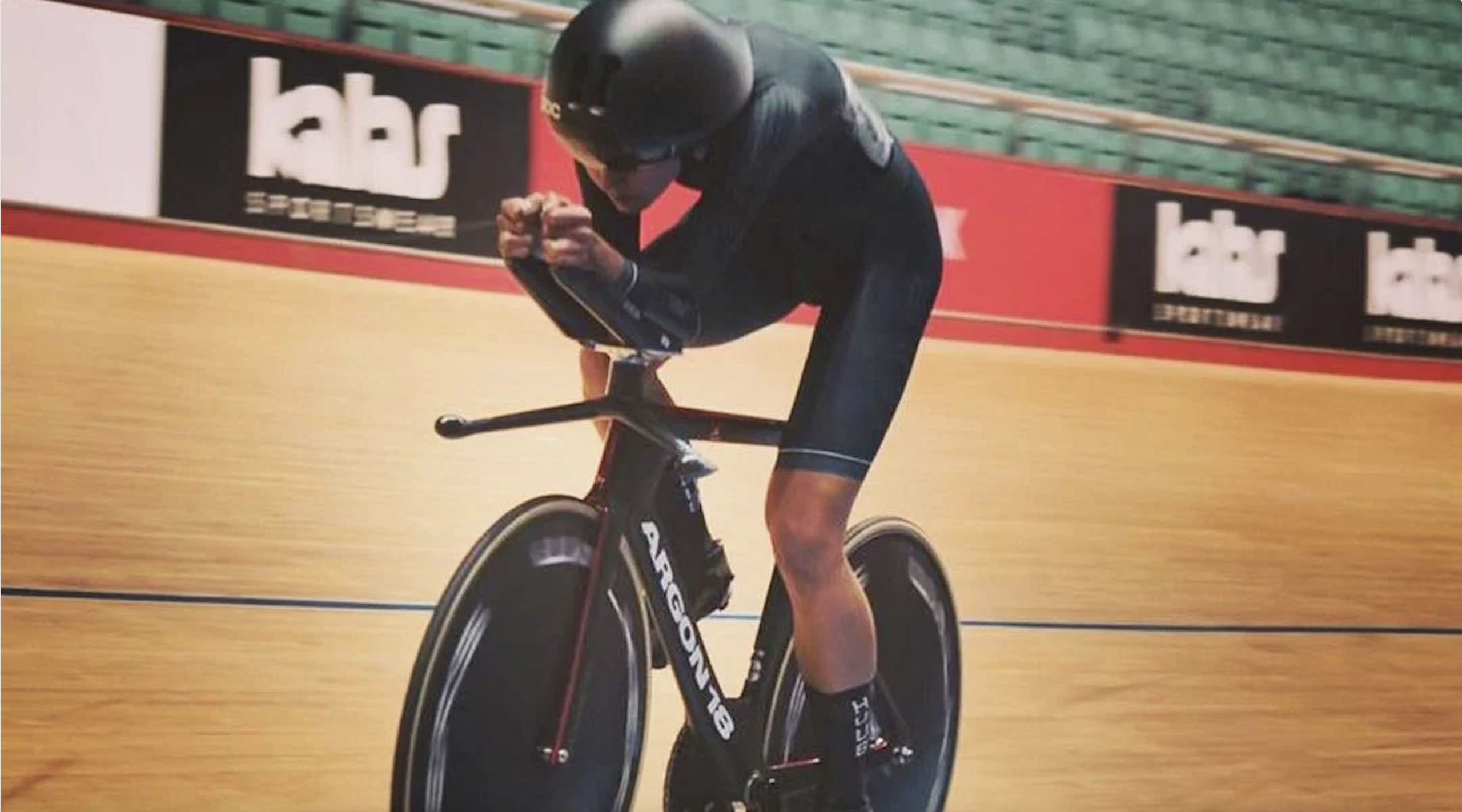 She’ll be going for the official UCi record in Switzerland later this year; through the kind offices of Sasha Castling at Ribble Cycles – whose machines the Drops Le Col ladies team rides – Joss granted us an interview from Tokyo where she’s Team GB reserve rider for the individual time trial and road race:

PEZ: Tokyo, congratulations on getting on to the Olympic squad, the call must have come late, was it a surprise?
Joss Lowden: Yes, I didn’t expect to be on the short list so to be put forward as a reserve was more than I had hoped for. Fortunately, because we have races across the whole year I only had to adapt my training and preparation slightly to ensure I was in a good place in case I was needed to fill in while we were in Tokyo. 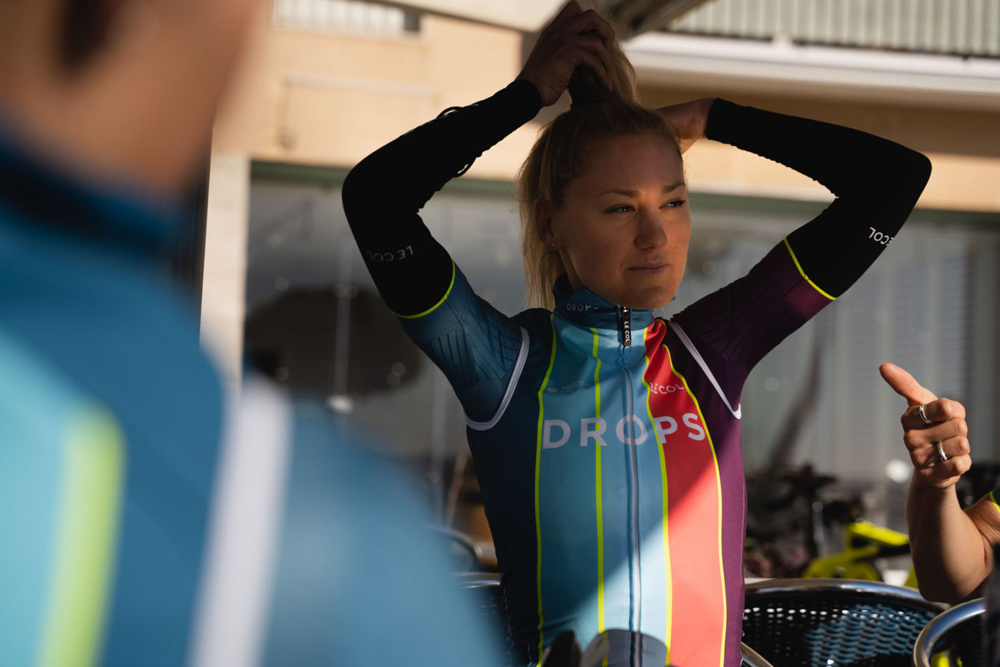 PEZ: It sounds like it’s HOT out there – and what are the roads like for training?
It’s warm but it’s not insufferable. We are fortunate that we have team support with us when we ride so we have plenty of cold drinks and nutrition to hand. The roads are in really condition; super smooth and really lovely to ride out. We are enjoying the riding a lot.

PEZ: There’s a lot of media talk that the Japanese public are ‘anti’ The Games, what’s your take on that?
It’s hard to say as we are staying out of the city and the reception we have received when out riding has been very positive with lots of waves, smiles and photos and the villages have flags and posters up. But of course this is just a small snapshot so it could well be a different story elsewhere?

PEZ: Tell us about ‘the bubble’ you’re in.
It’s just the road team (so the men, women and staff) and we just ride, eat, massage, sleep. It’s actually a perfect environment for training and preparation for racing.

PEZ: GB has just one rider in the TT and two in the road race and you’re reserve for both?
That’s correct. I think that it’s helpful to Anna Shackley – the team selection – to have me here too as means another pair of eyes and legs on the TT course in the recces where there’s so much to gain in really knowing the course and how to ride it, so I’m happy to help. 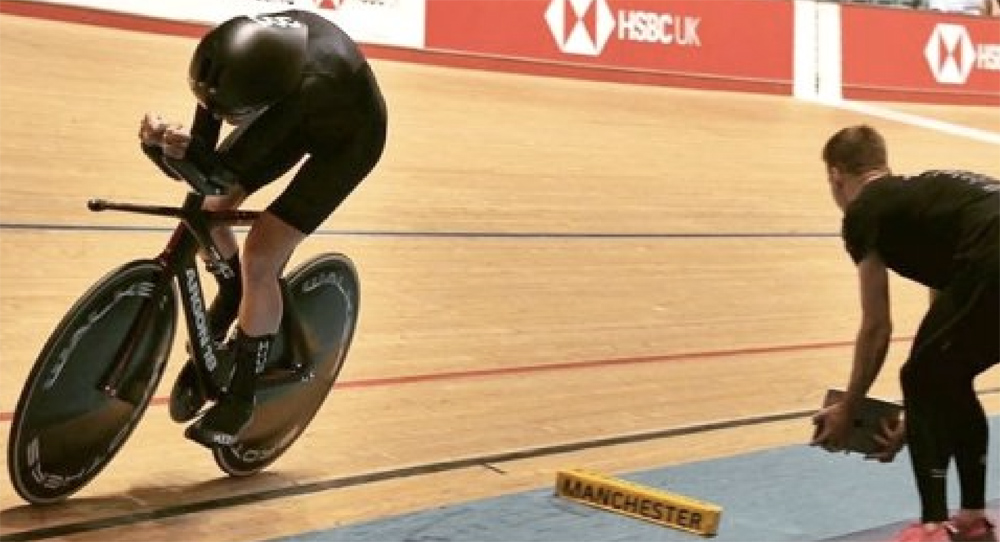 PEZ: You must be pleased with your win in the Tour Feminin in the Czech Republic – you were just two seconds behind hour record holder, Bussi in the TT?
Yes, the Tour de Feminin went really well, the team were so strong and we rode it really well. I had come off an injury that meant I wasn’t that fit going in to the race but it actually felt that I got stronger as the days went on and I think that was probably evident in the final stage. Bussi was strong in the TT and it definitely highlighted the areas for me to improve upon.

PEZ: And a five minute road stage win to take the GC.
On terrain like that it is hard for the peloton to close the gap if someone really goes and if able to keep on the gas. It was a bold plan from our DS Nico Marche but he knows me and what I’m capable of so with the right plan and work from all the team it meant I was in a good place to go.

PEZ: The Brabantse Pijl where you took fifth place – another nice result, do you like the rough and tumble Belgian race environment?
Surprisingly I did actually. I like a hard race, be it climbs, fast, attacks, technical, anything that makes it tough really and the course at Brabantse was certainly hard with so many short hard climbs. I don’t like the cold though…. I don’t function well! 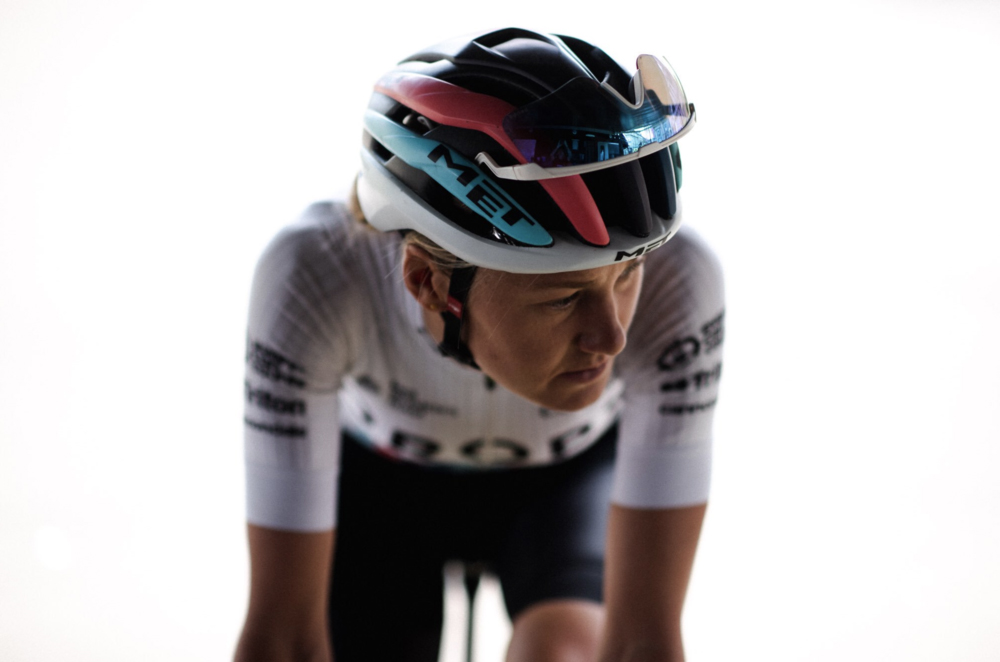 PEZ: Going back to the start of your cycling career, you came to the sport late?
I got into racing pretty late in comparison to a lot of riders that grow up flying round the track but I have trained as an athlete since I was about 10 years-old and I’ve always ridden a bike on holidays and just for fun. I think I had my early years of racing affected by some bad injuries so I do feel that I’m just getting into it now.

PEZ: Tell us about ‘lessons learned’ from your 48K plus hour effort.
I’ll tell you after the official attempt and we’ll see if any of the lessons learned were effective…

PEZ: Why Grenchen in Switzerland for the actual attempt?
It’s the home of Tissot timing and as running an official world record event is logistically pretty complicated to organise it somewhat helped the management. It would have been great to have been able to go to altitude to Mexico and Bolivia for the attempt as I think an altitude attempt could have really pushed the record but obviously travel isn’t that easy at the moment. Grenchen is at 450m altitude so should give good conditions for the attempt. 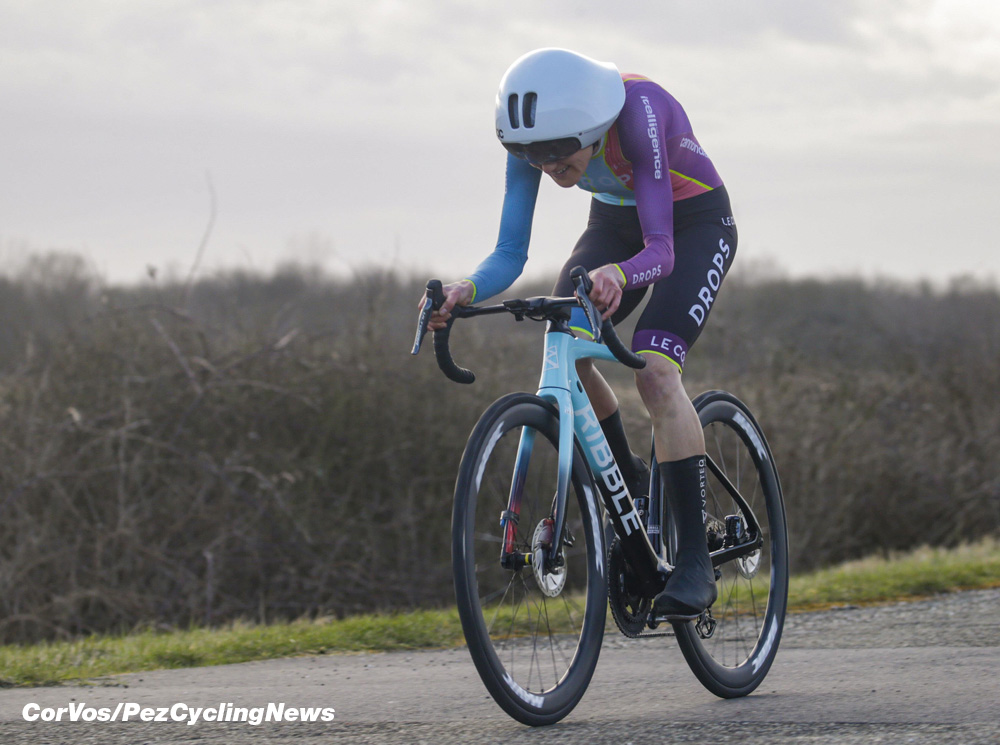 PEZ: What about all the ‘hoops’ to jump through – time keepers, controle. . .
Yep, it’s not straightforward! Fortunately I have my sponsor, Le Col clothing backing my attempt and a really good team to organise it so I just need to focus on preparing for the attempt and not worry about the logistics.

PEZ: You were marooned on Mount Teide due to the Covid ‘lockdown,’ with the HUUB team the last time you were in preparation for a record bid, that must have been tough?
It was a bit scary of course as we really didn’t know much about what a lockdown meant or whether we would be able to fly home. We had a good group of us together and for the first few days we tried to get creative for finding alternative ways to train such as building some circuits, however we pretty quickly realised that we might as well take some days of rest and chill out as we could see the races in our calendars disappearing. It was pretty tough mentally but we knew everyone was in the same boat so you have to just go with the flow.

PEZ: How will ‘the Hour’ fit in with your road commitments?
I’m hoping I’ve chosen a good place in the calendar to put the attempt. Some people might think I am mad to try and fit it in a road season, especially as it is in the week between the Word Champs and the Women’s Tour. We will see… I’ve planned a good run into it to peak for it so I have to trust I will be at the right place for the attempt physically and mentally. 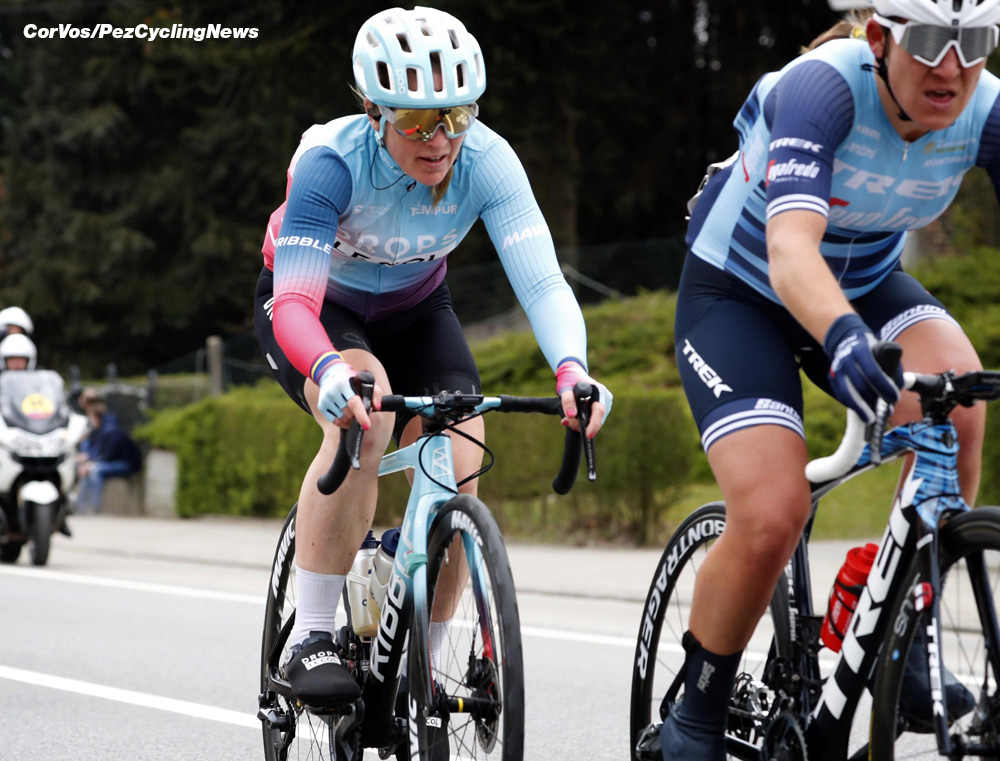 PEZ: You’ve been doing well in the ‘e’ race community – is that something you’re going to do more of?
It was great to do whilst racing was on hold but there’s little time at the moment to fit more in. Maybe in the winter.

PEZ: Hour Record apart, what’s still on the Joss Lowden ‘to do’ list?
A lot of things! Tour de France in 2022, Commonwealth Games too, a full race calendar for 2022 – and who knows what else. Dan wants loads of kids so I guess we’ll have to fit that in somewhere along the lines as well but we’ll take it one step at a time! For now, the season is plenty exciting with lots on and lots to tick off.

# With thanks to Sasha and Joss, we’ll be following her record bid with interest and wish her every success. # 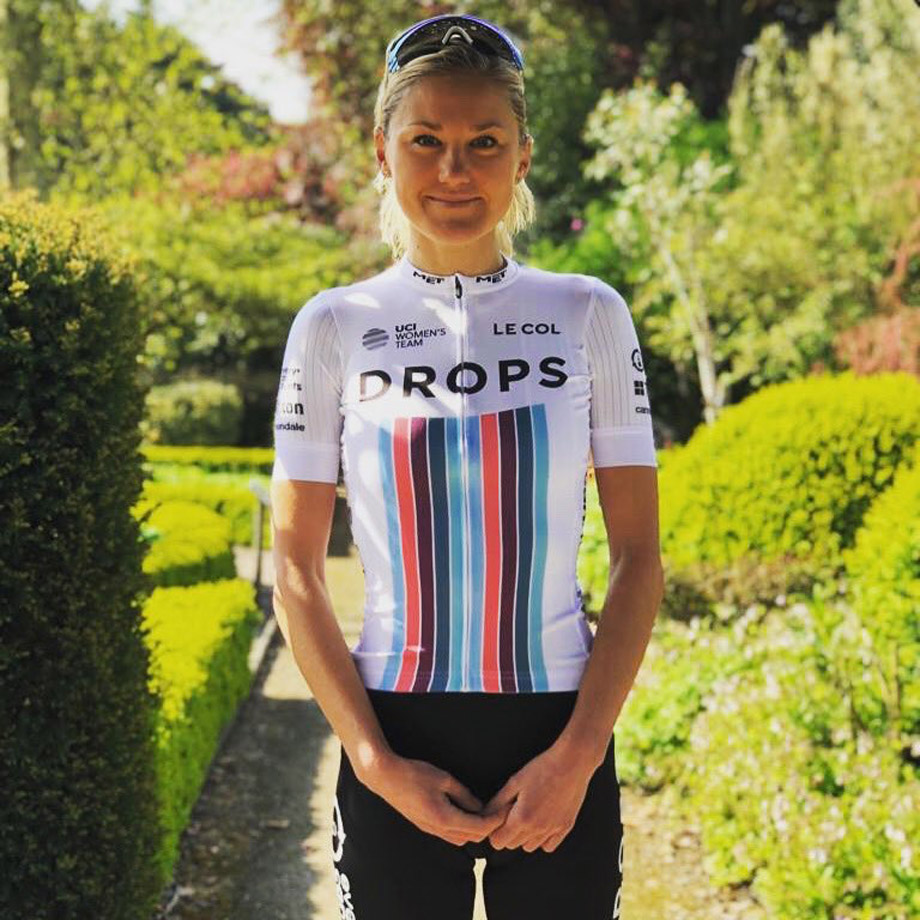