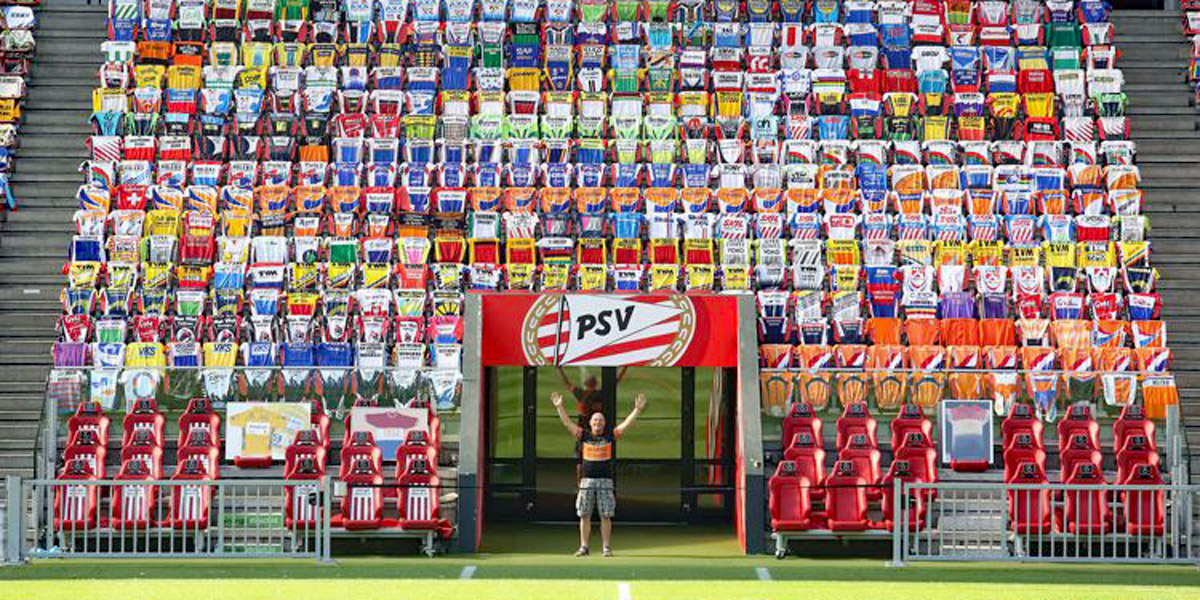 Collector interview: There is nothing better than some new cycling kit to give you some inspiration and having a collection of your favourite team clothing is sometimes unavoidable. Ton Merckx (yes, that’s his real name) has maybe taken it a bit far with a collection of over two-thousand jerseys. Ed Hood found out all about Ton’s wonderful collection. 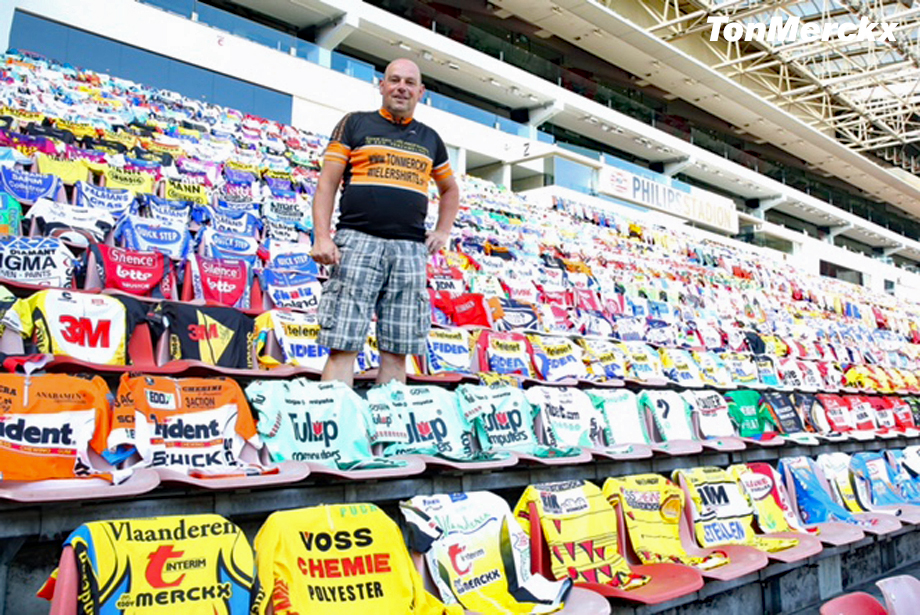 When a man called Merckx emails you from The Netherlands and tells you that he has a collection of 2,300 plus cycling jerseys, we have to pay attention, right? 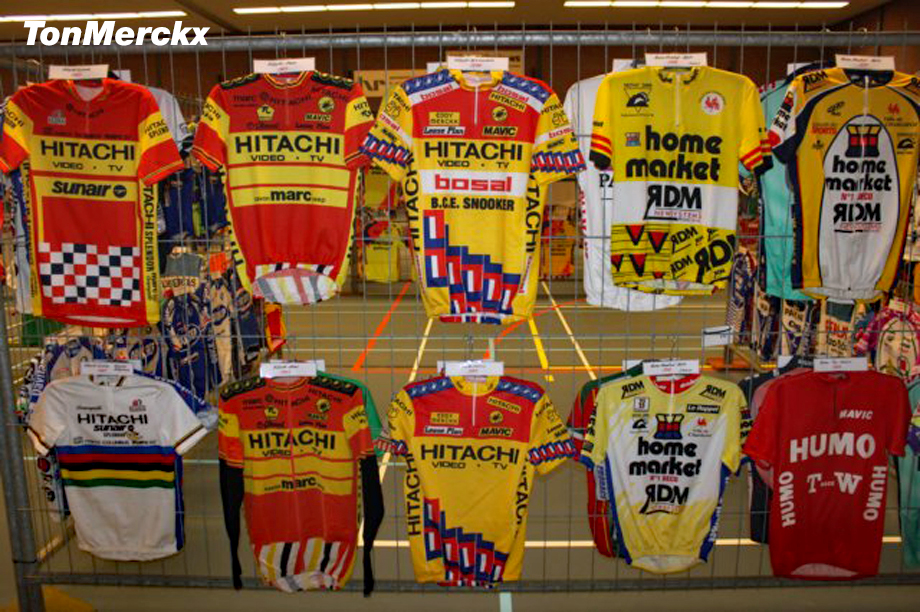 PEZ: The basics first, how old are you, where are you from, what do you do, what about family?
Ton Merckx: I am 55 years old, I’m from Eindhoven in The Netherlands. I used to be a baker, later on postman and the last eight years I’ve been working in a warehouse at the European base of the English company Nisbets who make kitchen equipment. I’m not married, but I have a very nice girlfriend, my dad was also a fanatical cyclist in the 50s & 60s. He was also a baker. At the age of 30 in 1959 he turned professional as an individual pro. Dutch amateurs from above the age of 30 could not race in Belgium; that’s why there were so many Dutch individual pro cyclist above 30 years-old in the 60’s, 70’s and 80’s. 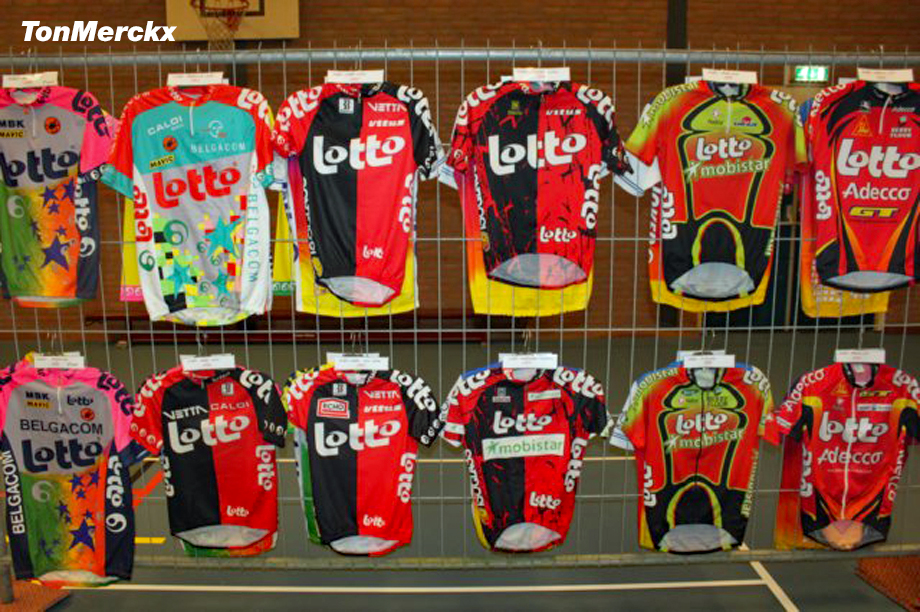 PEZ: Did you ever race?
I never did any racing because I suffer from epilepsy, but in 1980 I started to ride my racing bike. I did long distance events Paris-Brest-Paris (a mere 1,200 kilometres, ed.). Twice I had an epilepsy attack on my racing bike. But after years without epilepsy I decided to ask the doctor if it would be possible to start racing; the morning before my visit to the doctor I went cyclo-cross riding with my usual training partner and after about 10 km I had a epilepsy attack and ended up in a (dry) ditch. I really don’t know how I got back home – on my bike they told me – but laying in my bed after that I realised that this was the end of my racing dream. I’m still a very keen cyclist but not in any kind of competition.

PEZ: How/why did you start the jersey collection?
In August 1983 I visited a race in Valkenswaard in The Netherlands, it was one week after the Tour de France, and in the peloton with the big names and teams there was an individual pro cyclist called Jan Aling in a beautiful jersey advertising a local fruit merchant. I liked the jersey and decided that I would like to have one. 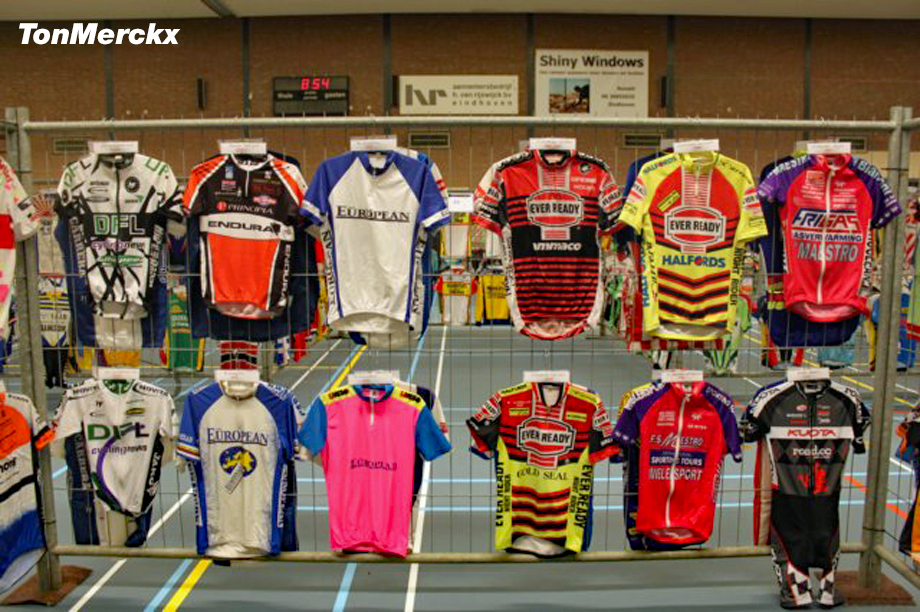 PEZ: Which was your very first jersey and when was that?
Some days after that race in Valkenswaard I wrote a letter to Jan Aling and I got an answer from him; ‘you can come to my place and pick up the jersey of my sponsor, HENK WINTERMANS.’ I also got a jersey of HB Alarmsystemen, B&S Wegenbouwmaterialen, B&S-Elro Snacks & Marc Zeepcentrale. At that time I didn’t realise that it was the start of this awesome collection. 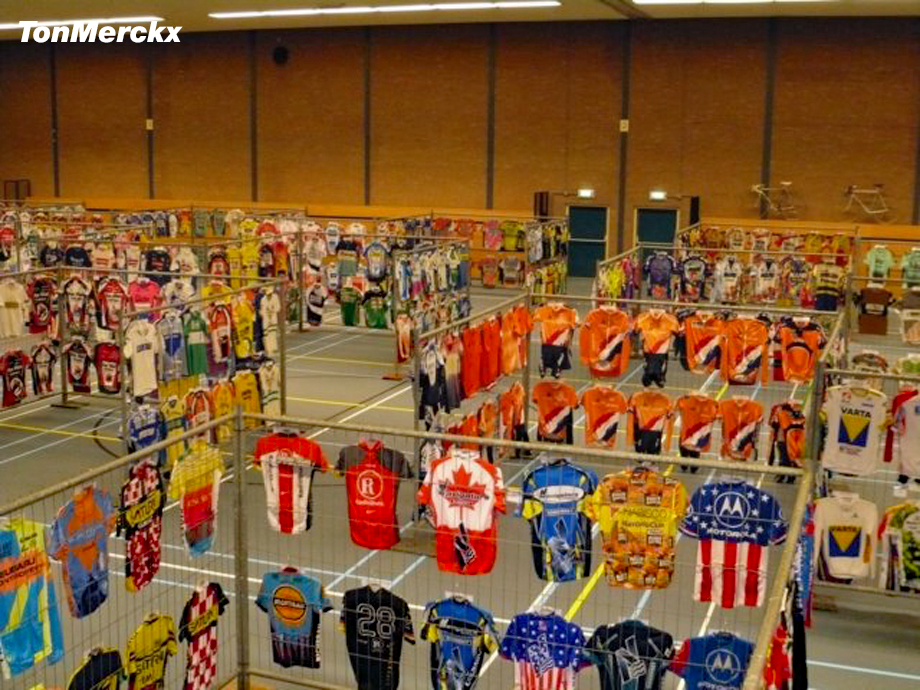 PEZ: How do you acquire them, where do you look?
In the past I wrote around 150 letters every winter to cyclists for jerseys, receiving around 70 answers of which 40 would be positive, It was hard to find addresses but phonebooks and national cycling unions were a good help. At the moment you can’t get any addresses because of privacy laws, but Facebook and the internet give me the opportunity to do some research and achieve similar results as I achieved in the past. When I visit races I never ask cyclists if they can help me on a jersey, you wouldn’t go to a building site and ask a builder to have his shirt! I wait until the end of the season. With around 2300 jerseys it’s working out very well for me. 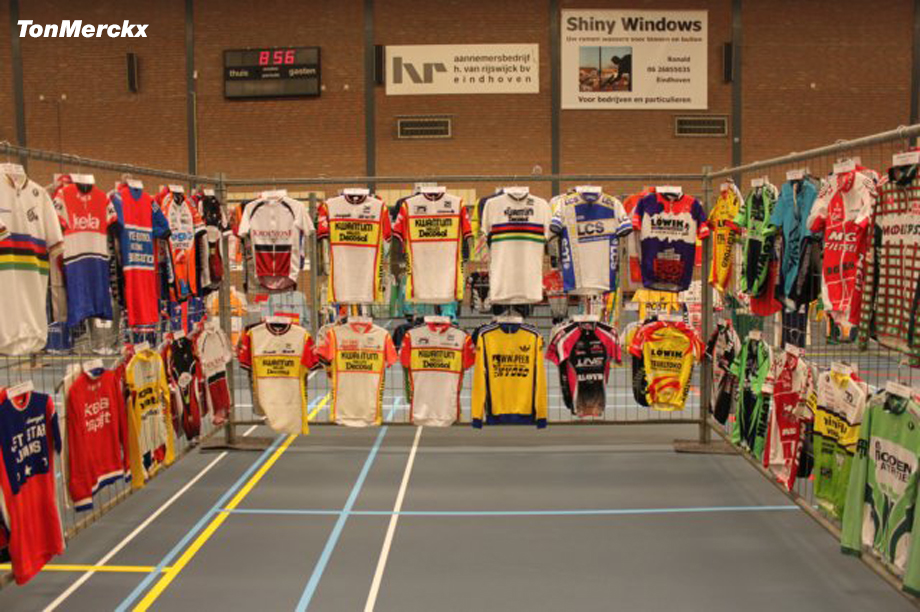 PEZ: What’s the most you have paid for one?
I prefer not to pay for jerseys but of course I’ll pay for packaging and shipping. But sometimes it happens that you have to pay for a jersey; the most I paid was 100 Euro.

PEZ: How many do you have?
Just today I counted 2301 different jerseys, but some more (10 jerseys) are on their way by post or still have to be picked up at cyclists homes. 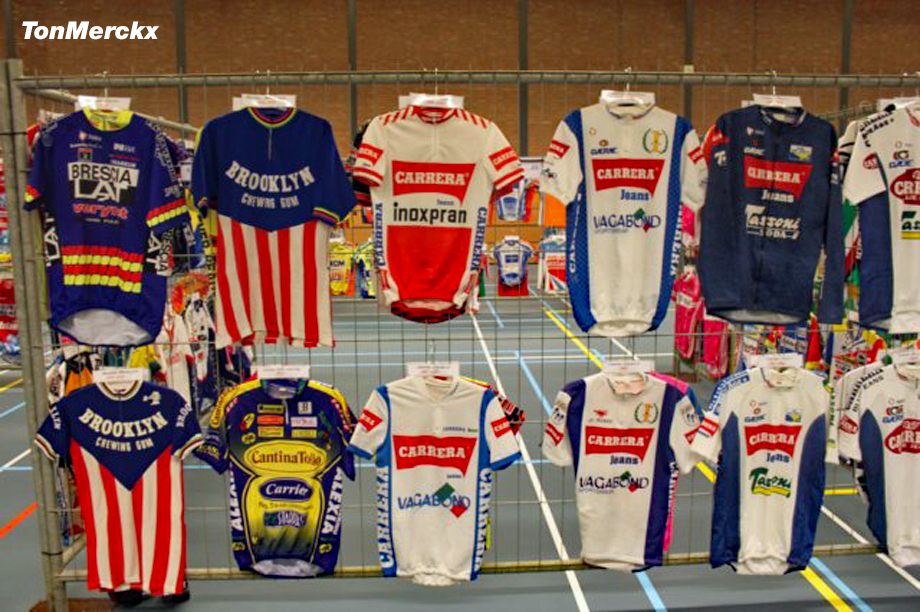 PEZ: Do you include track/six days/skinsuits?
I have jerseys from all kinds of pro cyclists and all kinds of type jersey. I have jerseys from road, track, cyclo-cross, a few from MTB, and six days. I have world champion jerseys from the road – Igor Astarloa; track – Tony Doyle and Peter Schep; Cyclocross – Bart Wellens, Erwin Vervecken, Mike Teunissen and Sven Nijs; MTB – Gunne Rita Dahle. Skinsuits; if they’re used or damaged it’s no problem, for instance from the last Tour de France I got the time trial suit of Marc Hirschi, which was damaged from his big crash. 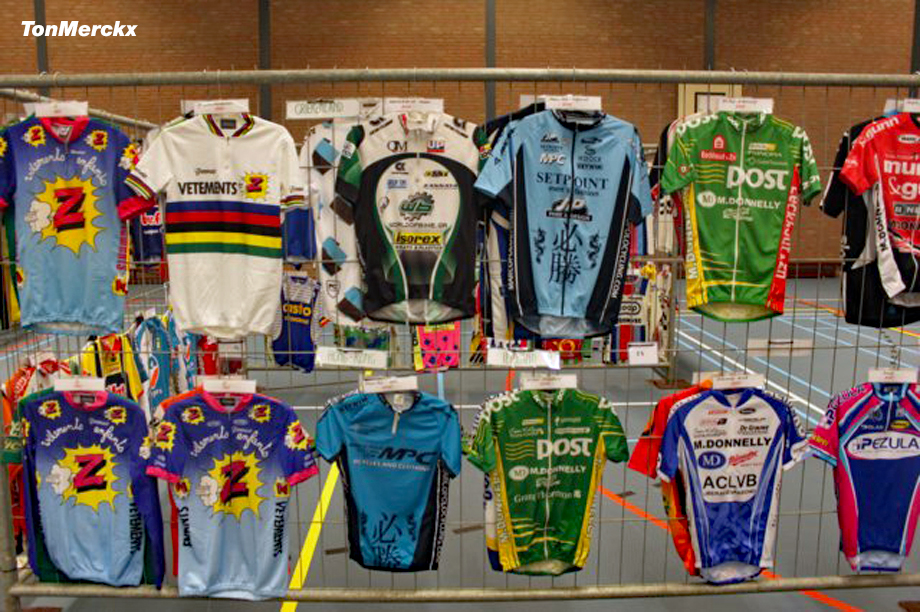 PEZ: Where and how do you store them – and find the one you wish to look at?
I store them in two rooms in my house, around 1100 jerseys are on hangers (only the Dutch & Belgium jerseys) with all the rest in big plastic boxes in my wardrobe. I have a lot of documentation for every jersey, I take a photo of the jersey and write down the staff and members of that team, all their victories and sometimes nice anecdotes. All boxes are numbered and the jerseys are put away in country and alphabetical order so when I want to see a jersey I can find it in just a few minutes. 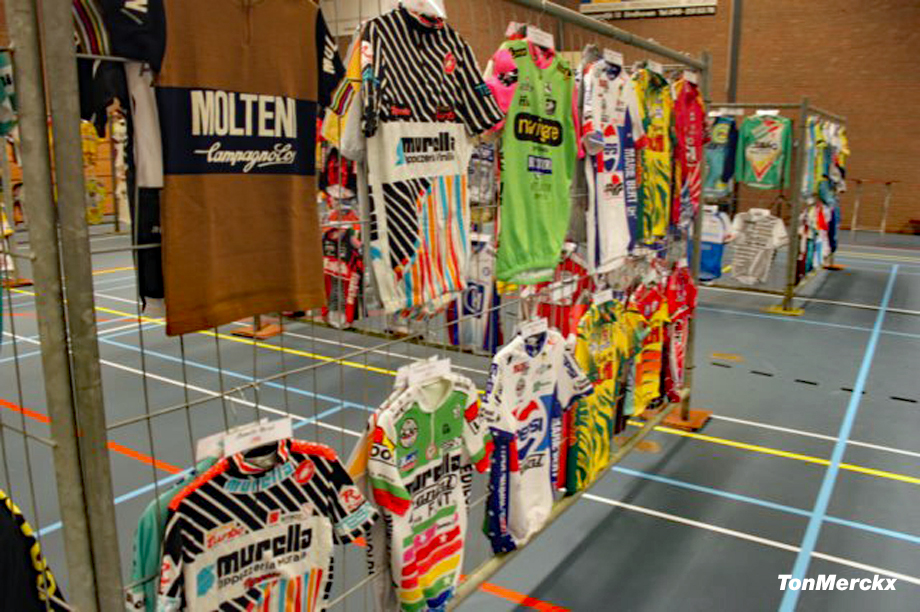 PEZ: Moths?
I pray to God every day to keep them away; so far I have had no problems. 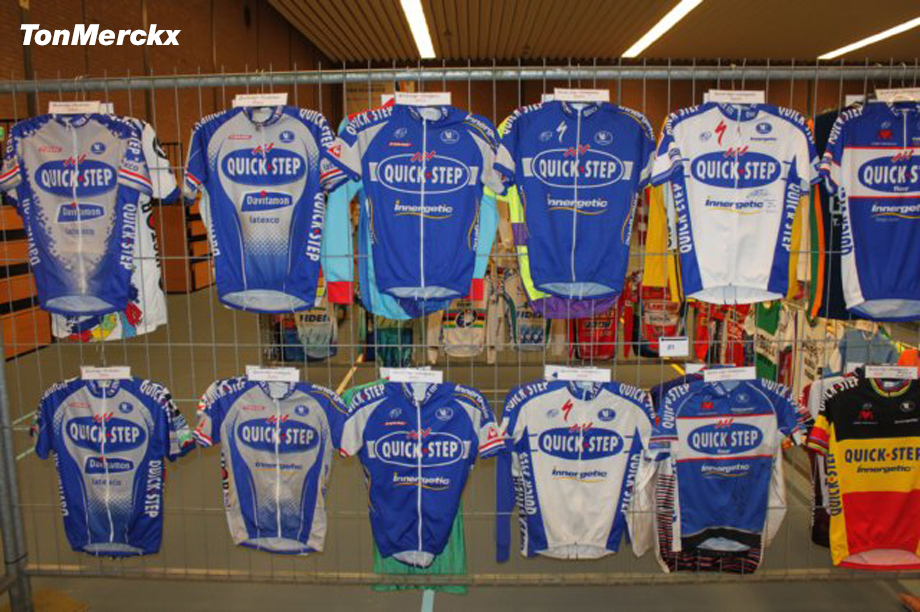 PEZ: Keeping them clean?
All my jerseys are in plastic sealed bags in the boxes, and all the jerseys hanging are in big plastic covers, I just bought a lot of covers today to cover the last jerseys which were without covers. I never wash them, because some of the jerseys are already dirty from being used by the rider. It has to stay like that.

PEZ: Which is your favourite?
It’s hard to say; there are some special ones. But I think NEILSON-TIVOLI (English team) because I live in a neighbourhood called TIVOLI and of course MOLTENI, And PEUGEOT-MICHELIN-BP. 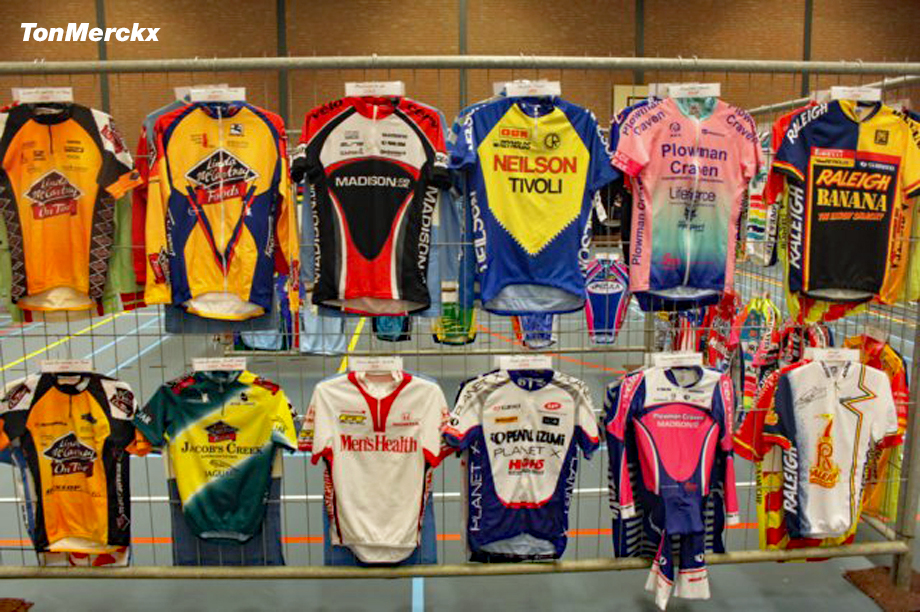 PEZ: Are jersey deigns getting better or worse as the years go by?
It depends on your personal taste, but some designs are better in the past like PEUGEOT-MICHELIN it lasted for many years, but personally I also like Team ILLUMINATE from the USA a black jersey with an orange zipper. The 2019 jersey of ILLUMINATE I picked up in January this year during my holiday in New Zealand in the town of Wanaka from Mikayla Harvey. 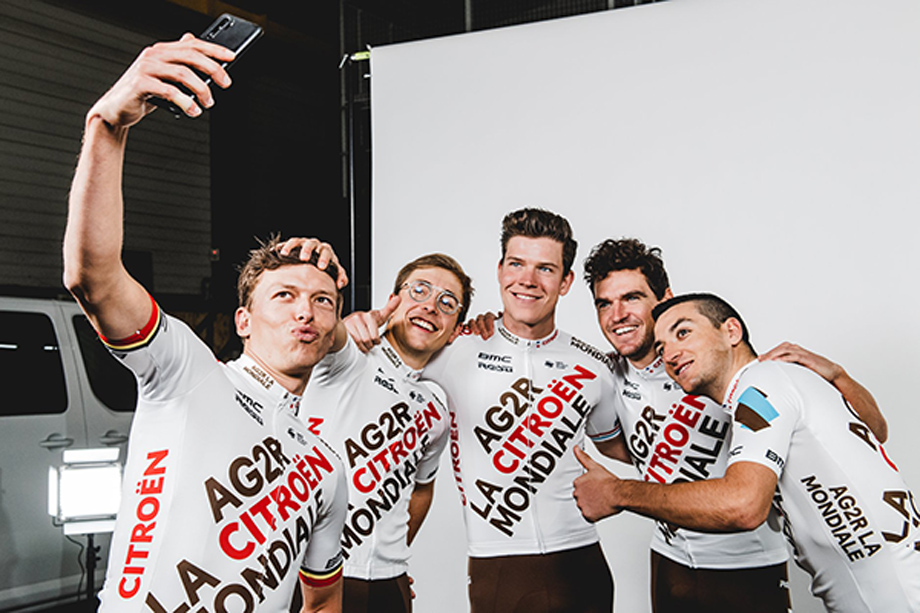 Not in the collection yet

PEZ: What do you think of the AG2R 2021 jersey?
I had hoped it was a JOKE; but I guess the names of the sponsors are loud and clear to read. 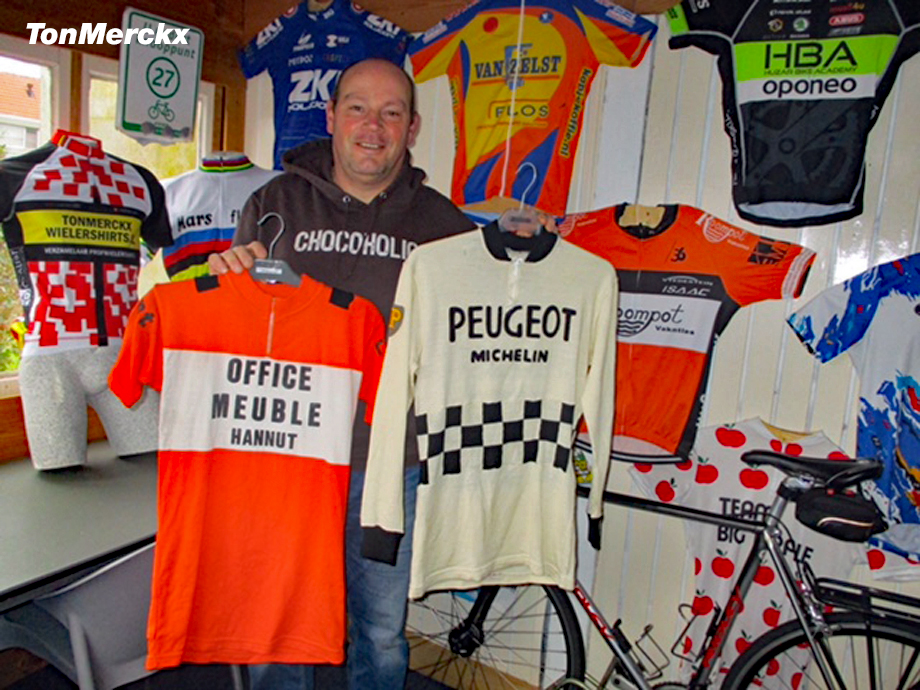 PEZ: What’s the ‘Holy Grail’ you’ve yet to add?
A PINK JERSEY OF THE GIRO D’ITALIA would be great, but also some old jerseys from teams like Percy Bilton; I have a ‘bucket list’ with some names on it. 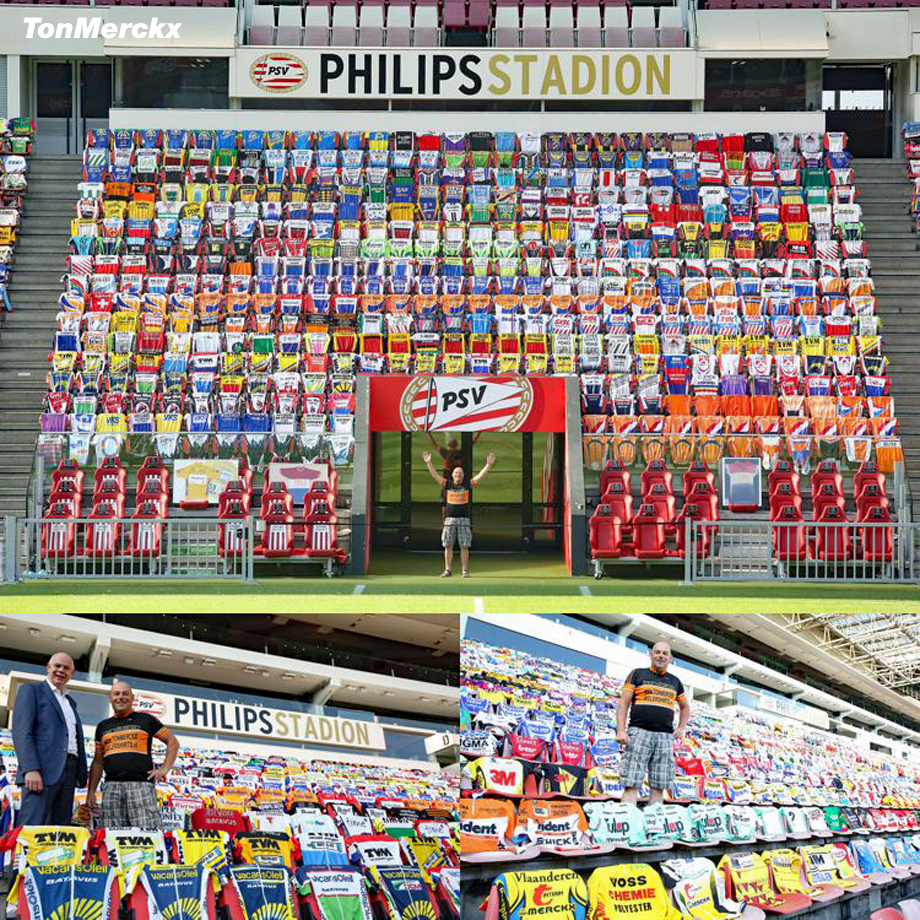 PEZ: When will the collection be finished?
When I die, I guess? 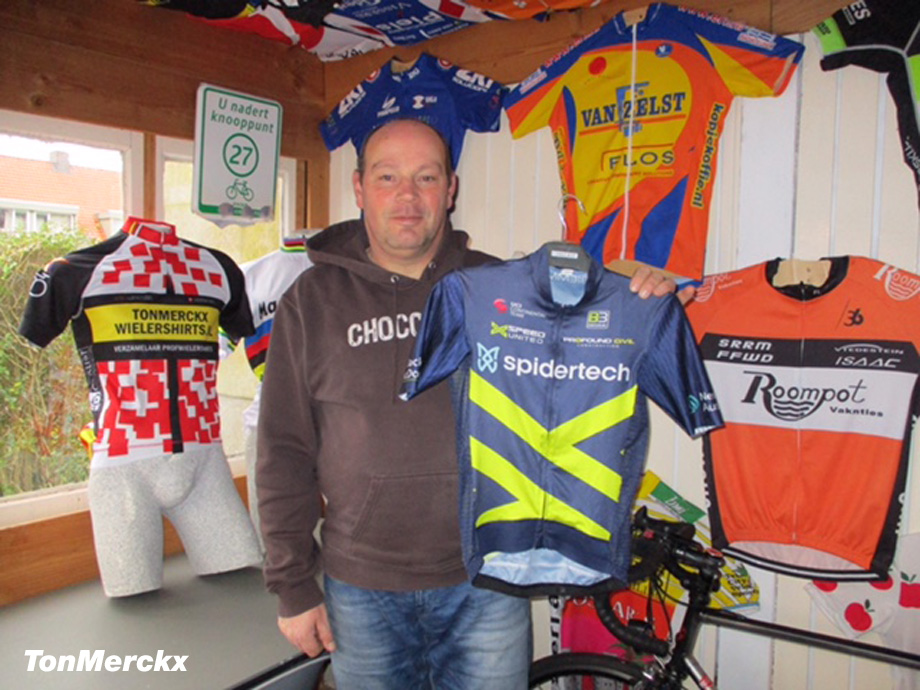 # With thanks to Ton, you can find his website HERE – and next time your partner moans about how much cycling clothing you have in the wardrobe, let them read this. #