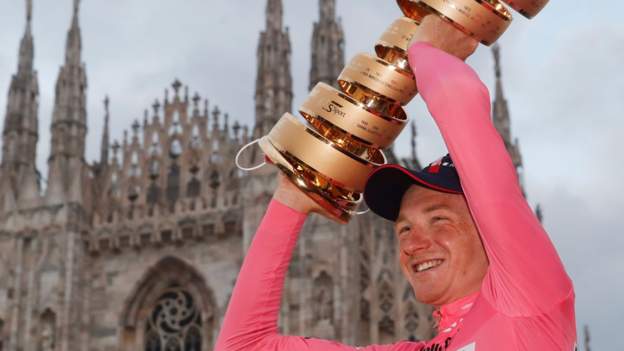 It may not have seemed so at the beginning, but 2020 has been a year which has seen the re-emergence of British success in cycling.

And the man at the forefront of this new wave, Tao Geoghegan Hart, wants to young people get into cycling, and improve its diversity.

The Ineos Grenadiers rider, 25, who won the Giro d’Italia in October, told a BBC Radio 5 Live Bespoke special that London holds the key to promoting diversity, and discussed his wish to encourage the next generation of riders.

“Something I’m really passionate about is to get more kids in the sport and more kids in London riding,” he said.

She believes her achievements in 2020 are among her best yet – in particular victory at La Course, the women’s edition of the Tour de France.

The delayed 2020 road cycling season did not begin well for British riders or the previously dominant Ineos team – who have won seven Tours de France in 11 attempts.

Ineos, formerly Team Sky, lost sporting director Nico Portal, one of their most important members, to a heart attack at the age of 40 in March. His death deeply affected the team, and Geoghegan Hart paid tribute to him after winning stage 15 of the Giro.

Following the team’s surprise decision not to renew four-time Tour de France winner Chris Froome’s contract for 2021, they endured a nightmare Tour when 2019 champion Egan Bernal abandoned. They then lost Geraint Thomas on the third stage of the Giro d’Italia when he fractured his pelvis in a harrowing crash near Mount Etna.

But amid his success, he has spent time considering his home city’s role in getting Britain back on the bike.

“It’s something I’ve reflected on a lot – on how I’m going to be a part of that,” he said. “There’s a lot do be done in diversity and how we move cycling forward and I believe London can be the key to that.

“I grew up in Hackney – it was such a privilege to go to school there and grow up there because of all of the incredible of variety of people I came across from a young age.”

Geoghegan Hart’s passion for cycling, and London, began on Hackney’s football pitches and in the swimming pool – he also swam the Channel as a teenager.

He added: “I loved the fact I left London every day. It wasn’t training, it was exploration – getting lost in Essex, coming back far too many hours later than we should have done… I loved the independence of it.”

She won an Olympic silver medal in 2012 and the world road race title in 2015, but Lizzie Deignan believes 2020 saw some of the best performances of her career.

After becoming a mum to daughter Orla in 2018, Deignan set about returning to the top level of cycling, winning last year’s Women’s Tour of Britain.

This season, she won La Course – the women’s one-day race version of the Tour de France – as well as the prestigious one-day ‘monument’ Liege-Bastogne-Liege race, and came top of the UCI’s individual point ranking for 2020.

“Back in 2015 and 2016, winning was a bit easier because the depth of the peloton wasn’t as strong, but it’s harder to win races now,” she told BBC Radio 5 Live. “This season has been a special one, definitely.

“Winning La Course was particularly special – my team-mate Elisa Longo Borghini completely sacrificed herself to get me the win. I won it because I didn’t want to let her down. I know that on paper Marianne [Vos] is faster than me, so it was special to win like that.”

These victories were made all the more special by Deignan’s new outlook, as she balances family life with performance on the road.

“I found it a complete rollercoaster,” she said. “Things like a child sleeping well is so important as an athlete and all that goes out the window. Orla was off her routine – not sleeping or eating well. The last bit of the season felt like survival.

“In the past, I struggled with being a pro – the selfishness was all encompassing. Life was dedicated to being best I could be, but some of the big wins weren’t worth it – not seeing friends and family.

“Having Orla made me much more open-minded to do both. Some of the earlier career sacrifices led to success. But it’s not sustainable, and not best for your mental health – I’m much happier now than I was before.”