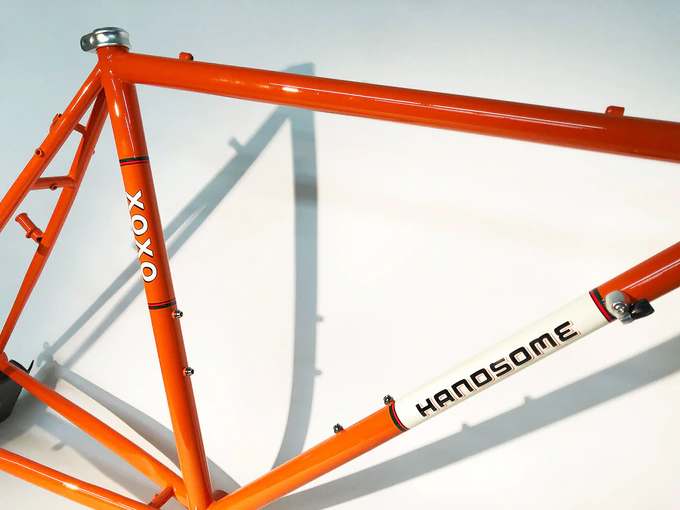 “Last chance for moustache handlebars?” That’s the heading for the XO-3 from the 1994 Bridgestone catalog. Like many of the world’s greats, the Bridgestone XO-1 never really caught on, until it was no longer available.

The catalog copy continues with, “The 1994 X0-3 is a low-cost version of the 1993 XO-1, a bike that didn’t sell well, but was still our all-time favorite. Rather than toss out the entire concept, we brought it back with a third chainring and a lower price. If this bike flops, we’ll put aside enough Moustache Handlebars for personal use well into the next century, and not give it a second thought.”

As these things usually go, once it was no longer available, the X0-1 became a cult classic after those who didn’t have the means at the time felt like they missed the boat. Long story short, that led Handsome Cycles to create a replica tribute to the X0-1 in 2011 called the X0X0. After producing around 130 frames, the project was laid to rest with Handsome Cycles thinking that was the end of it.

Much like that original Bridgestone model though, demand from those who are kicking themselves for not buying the first XOXO has led Handsome to create a second XOXO tribute replica, still with nearly the exact same geometry as the 1993 model XO-1. Like their first XOXO model, this one will be built in very limited numbers – so if you want one, you’d better act now.

While Handsome Cycles doesn’t have any of the new frames to show just yet, we do have some details on a few of the changes. Like the original replica, the frame uses TIG-Welded tubing instead of brazed lugs. However, the tubing has been changes from Reynolds 631 to 520 Chrome-Moly steel. The change was made due to insignificant differences between the two materials in terms of ride quality, and the higher pricing and lower availability of 631 currently.

The dropouts remain at 132.5mm so you can run 130mm or 135mm rear hubs, and tire clearance is listed at 26 x 1.95″ without fenders, or 26 x 1.75″ with fenders. New to the 2020 X0X0 is a semi-horizontal dropout design to allow for a bit of adjustment for different tire sizes. A pump peg has also apparently been added to the front triangle.

There’s also a new headbadge that will be made for “this final classic release.” One will come with each frameset and complete bike, or you can also back them for the decal set and headbadge for $25 if you can’t swing the whole bike.

XOXOs will be sold as a frameset or in one of two complete builds, in 49, 53, 56, and 60cm sizes. You also get a choice of three different colors including the original Construction Pumpkin orange. Complete builds will be sold with a moustache bar and bar end shifters, with one updated 2×10 drivetrain option, and the other with a 1×11 wide range drivetrain. Wheels will include a “close cousin to the original Araya rims,” with Araya TM-840F 32h rims and retro-styled Formula hubs with sealed bearings. You can see the full specs for the 2×10 build and the 1×11 build by clicking either link (though exact specs are TBD).

Offered through a Kickstarter only (which is already fully funded), you can pick up a frameset for $699, or the complete 2×10 for $1,349 and 1×11 for $1,499. Expected delivery dates are listed as July 2021 for the framesets, and August 2021 for the complete builds. As Handsome Cycles puts it, they don’t plan to build many more of these than what are ordered through this Kickstarter. And they don’t plan on doing this again. So if you are still kicking yourself for missing the XO-1, then the first XOXO, don’t sleep on this a third time!