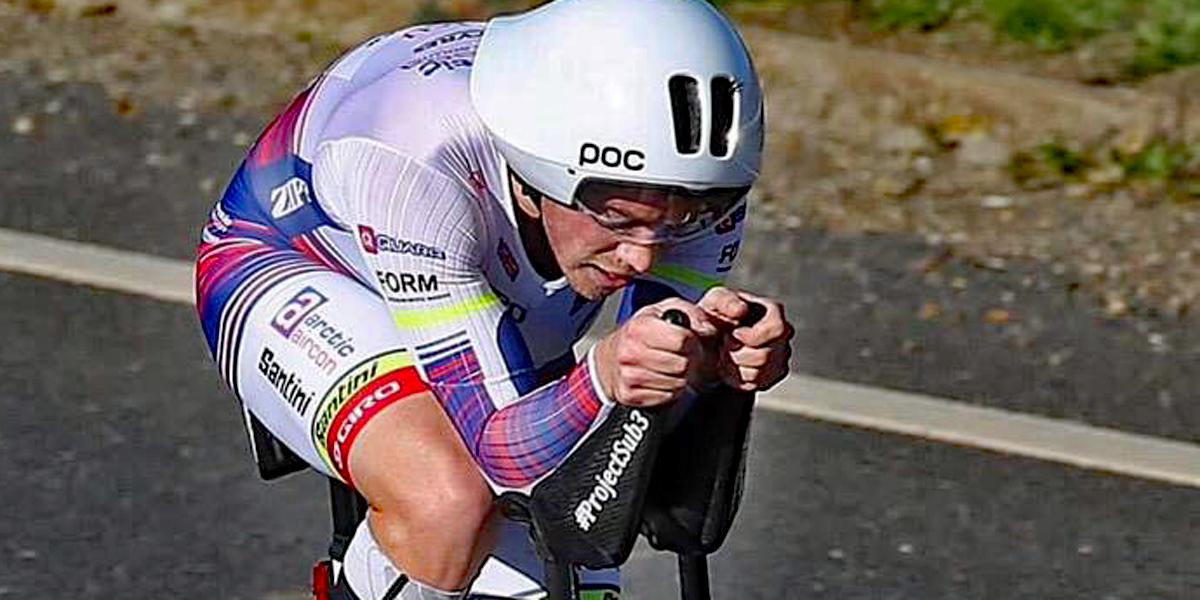 Rider Interview: Ed Hood loves the ‘contre la montre’ and so talking the first man to go under three hours for 100 miles was the dream interview. Jonathan Shubert recently broke the RRA ‘straight out’ 100 mile record, Ed had a word. 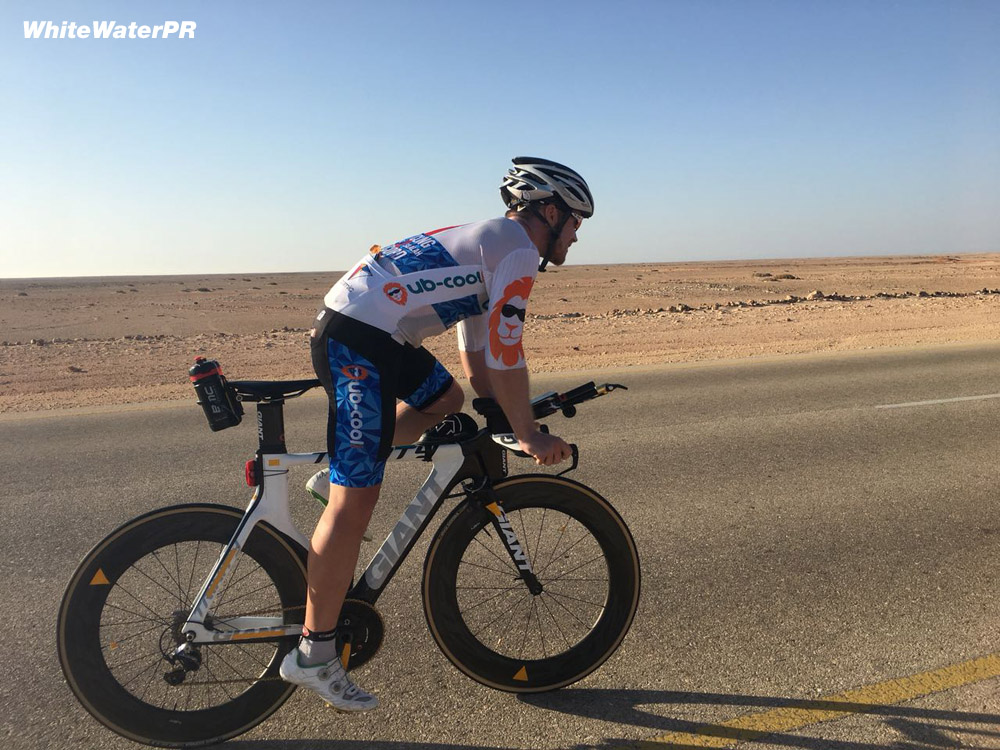 In England there’s an organisation called the Road Records Association, the RRA, who are the governing body for ‘place to place’ records – the most famous of which being the ‘End to End,’ Lands End to John o’ Groats. But they also sanction ‘straight out’ records over distances of 25, 50 and 100 miles. The aspiring record breaker can chose his parcours as long as it’s of the prescribed distance. And he has to wait for the right weather conditions – ie, a screaming tail wind!

In 1956 the legendary time trial rider, Ray Booty was the author of a stunning ‘straight out’ 100 mile ride, covering the distance in 3 hours 28 minutes, on – wait for it – a three speed Sturmney Archer hub gear, just like the one on your grandad’s bike. That record stood for 37 years until the best time triallist of his generation, Ian Cammish reduced it to 3:11:11 in 1993. Cammish’s stunning ride has stood the test of time for some 27 years but in September of this year fell to science teacher, Jonathan Shubert with 3:08:15.

But Shubert hadn’t finished, on a blowy Monday at the start of November under the strict conditions which apply to RRA record attempts he dipped under three hours for the distance, averaging a staggering 2:57:38, that’s 33.6 mph or 54 kph. PEZ just had to ‘have a word’. 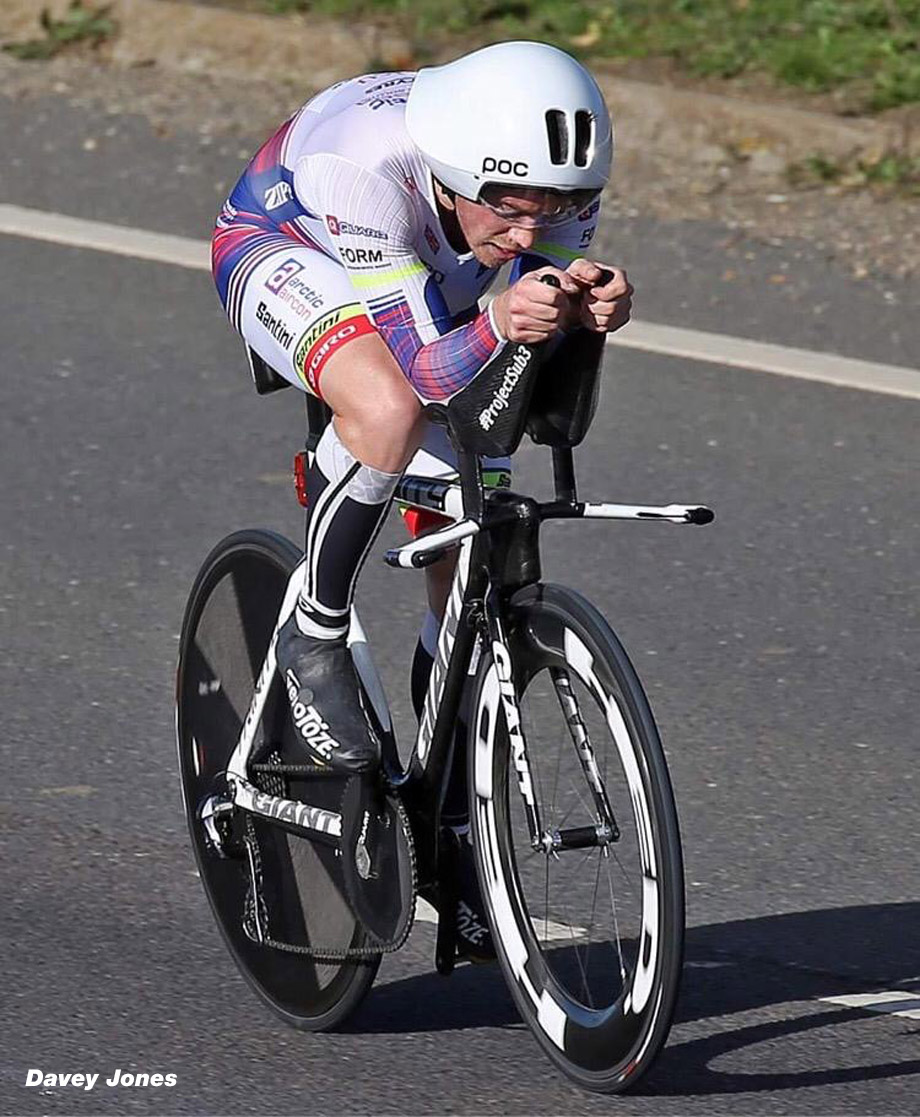 PEZ: Congratulations, Jonathan a stunning ride – the basics, how old are you and what do you do for a living?
Jonathan Shubert: I’m 34 years-old, I set the record on my birthday; I’m a science teacher and ride for the Arctic Aircon team.

PEZ: Tell us a little about your palmarès please.
I just like trying ‘stuff,’ I have a lot of enthusiasm for riding a bike. In 2014 I cycled around the world and then three weeks later I won the British 24 hour time trial championship. I have the world record for riding across Oman, that’s a distance of 1300 kilometres. And I won the Best British All Round time trial competition over 50 miles, 100 miles and 12 hours, last year – that’s when I began to think about the record, I rode a ‘100’ at 30 mph and began to think it would be possible to break the three hour barrier on a straight out basis. 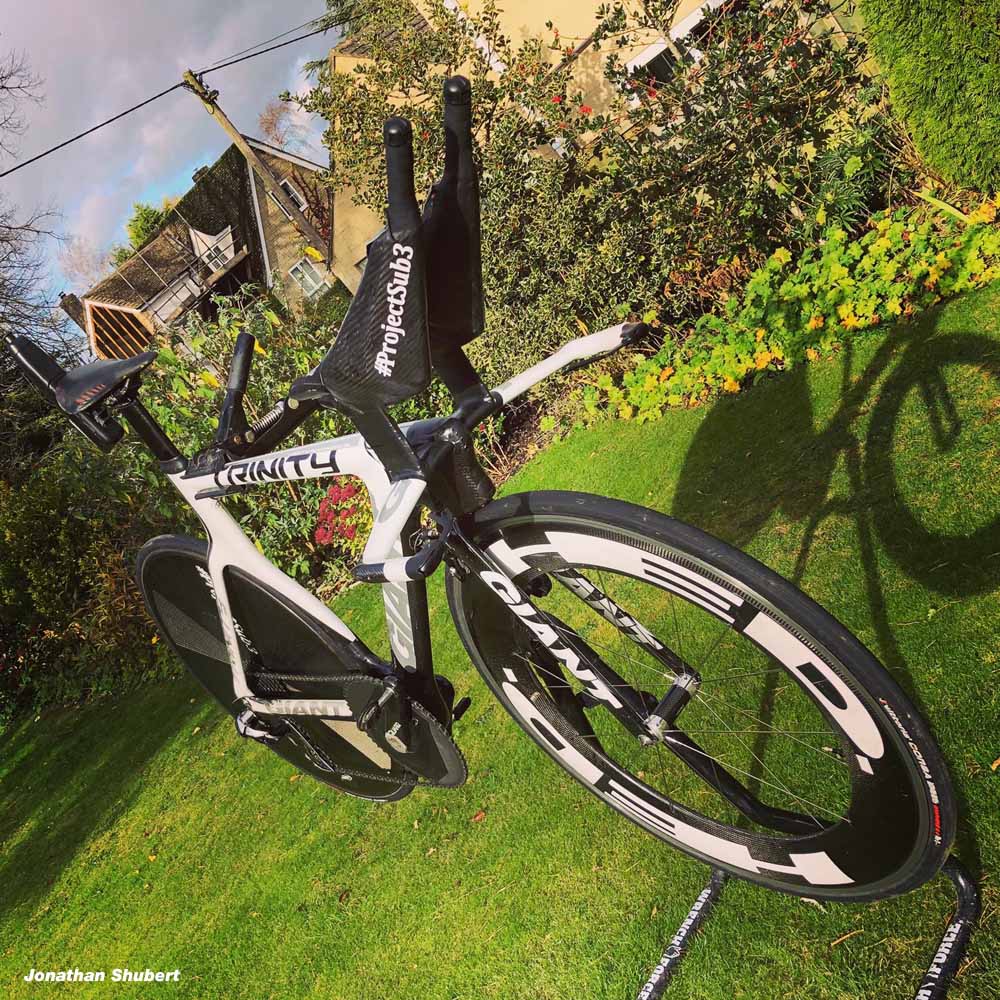 PEZ: How did you chose the route?
Michael Broadwith, who is current ‘End to End’ record holder, has fallen in love with the RRA and was a huge help to me. Michael also has the RRA, English ‘side to side’ record, that’s Pembroke on the west coast to Great Yarmouth on the east coast; his successful attempt on that record used the roads I utilised, they take in the FI and E2 time trial courses on the A11 and A14, quick roads. The start was just east of Milton Keynes and the finish near the village of Keswick hear Norwich. Tim Bayley and Michael were a great help in planning the attempt and were on my support team.

PEZ: You were bronze medallist in the 2020 British 12 hour time trial championships with 292 miles so you were, ‘in shape’ but a straight out record is so weather dependent?
The autumn is the time for big winds but even without the wind, aero ‘tech’ advances play such a big part in these rides nowadays. I did 3:08:15 to break the record for the distance in September but knew that with the right conditions I could go sub three hours. That ride was very useful though because it allowed me to recce the course and see how I handled the distance at that speed. The weather system that enabled me to go for the record appeared put of the blue, it looked too good to be true – on the day I had a 24 mph tail wind from the south west – you have to notify the RRA at least 48 hours in advance of the ride and when we saw how the weather was shaping up we booked my slot. 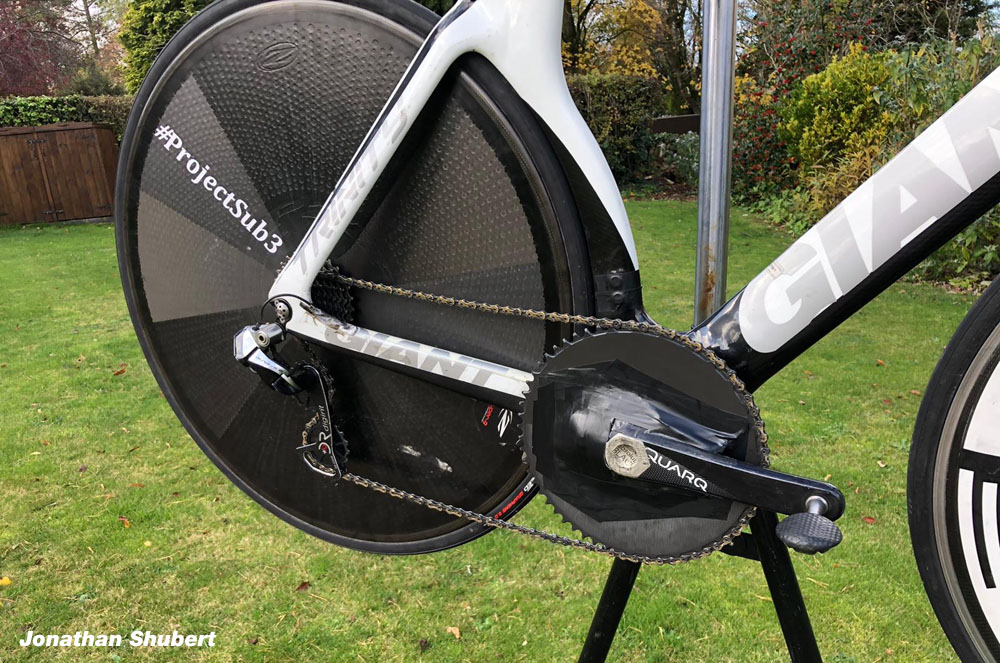 PEZ: The bike and those tri ‘skis’ – but I believe you had problems with it?
The bike is a Giant Trinity which I’ve ridden for most of my time trialling career, I won the national 24 hour time trial championship on it in 2014. I designed the arm rest skis myself, they save somewhere between 11 and 16 watts over conventional tri-bars. They’re not UCi legal but I hope to market them as ‘Project Sub 3’ for triathlon and domestic time trial use. I use a Zipp Sub 9 rear disc, ideally I’d like to run a tubeless rear tyre but the rim isn’t designed for that so I use a latex tube with Vittoria Corsa Speed 2.0 tyres. The front wheel is a HED Jet 9 tubeless, I run 23 mil. tyres because you want the sidewall to align with the rim, even a 25 mil. tyre would cause turbulence.

I was running a 62 ring – on an 11-28 Shimano cassette with a Shimano Dura-Ace 9000 rear mechanism – that’s so that the chain is central on the cassette at high speed – but at times I could have done with bigger. Taking the bike out of the car I caught the Digirit over-size derailleur cage and must have damaged it because I lost tension in the pulley arm and unshipped my chain during a gear shift early in the ride; I had to dismount to put the chain back on. I realised that it would happen again and couldn’t change gear, so chose the 13 sprocket as my, ‘gear of the day’ – the course wasn’t pan flat so it was hard on the drags at 24/25 mph but then on the fast parts I was spinning at 120 rpm. [Subsequent to the interview PEZ researched a little bit more about the machine: Jonathan has discarded the original Giant front brake and fitted a custom milled TRP caliper with the brake levers turned in horizontally so as not to catch the air; the Quark power meter cranks and fixings for the 62 tooth ring were clad with electrical tape to smooth the air flow and the Chris King bottom bracket lubricated with sewing machine oil, ed.] 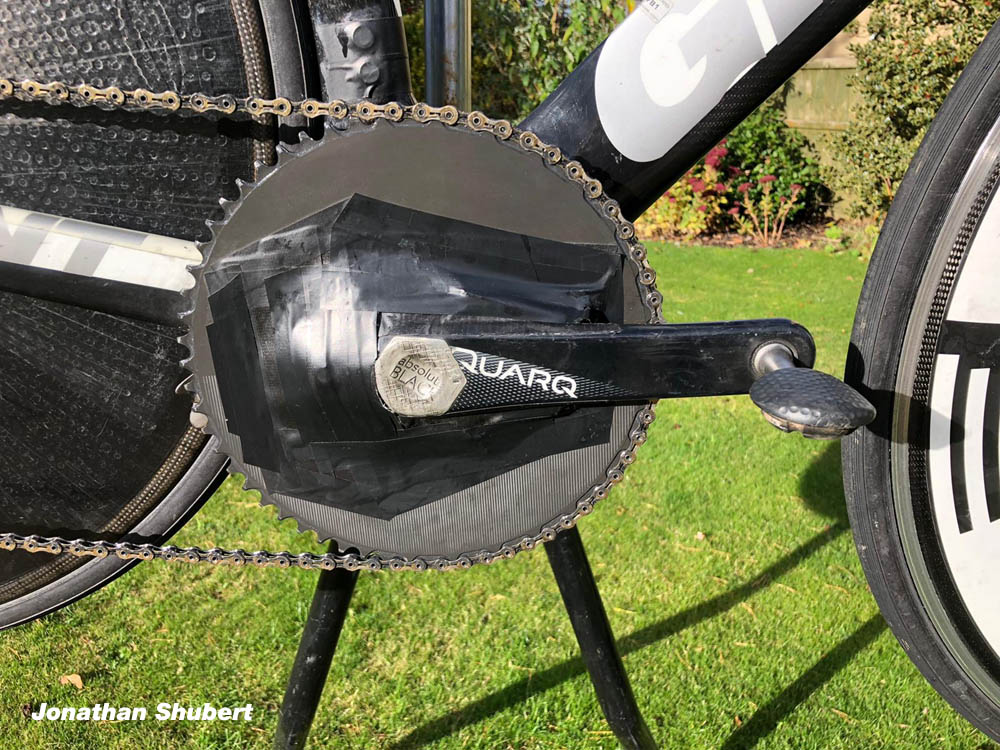 PEZ: I believe the machine is pretty ‘slippery?’
I had it in the Boardman wind tunnel and they said it was the lowest drag coefficient (CdA) for any machine they had tested; I think it was 0.167. And that was on a set-up that was slower than the one I had for the record.

PEZ: The RRA conditions for setting a record are pretty stringent, aren’t they?
There are two observer/time keepers in the car and others on the route to keep an eye on you – one of them was Ian Cammish, to see him out cheering me on was terrific.

PEZ: Numbers?
My average speed was 33.6 mph, around 50 mph top speed, my power meter packed in but average normalised power was 285. 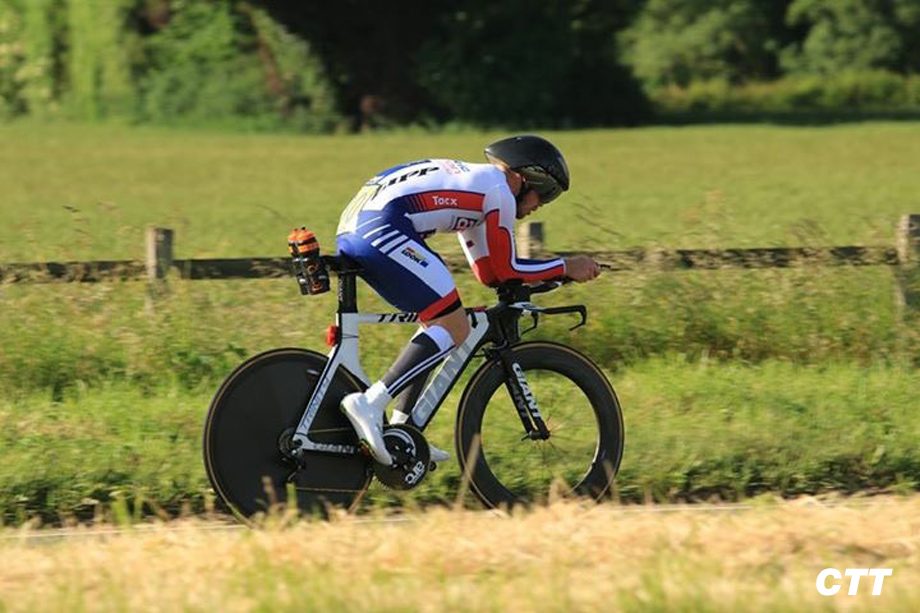 PEZ: What about nutrition?
I took Mountain Fuel caffeine and pectin gels, I used them in the national ‘12’ and found them to be excellent. I had a Camel Back on my chest, as much for aiding aerodynamics as for hydration, I had isotonic drink in it but actually blew air back into it after I drank to keep it in shape.

PEZ: Tell us about your training.
I do around 10 hours each week with a lot of quality work included. In the summer I ride time trials so that I’m used to my position and comfortable on the bike. 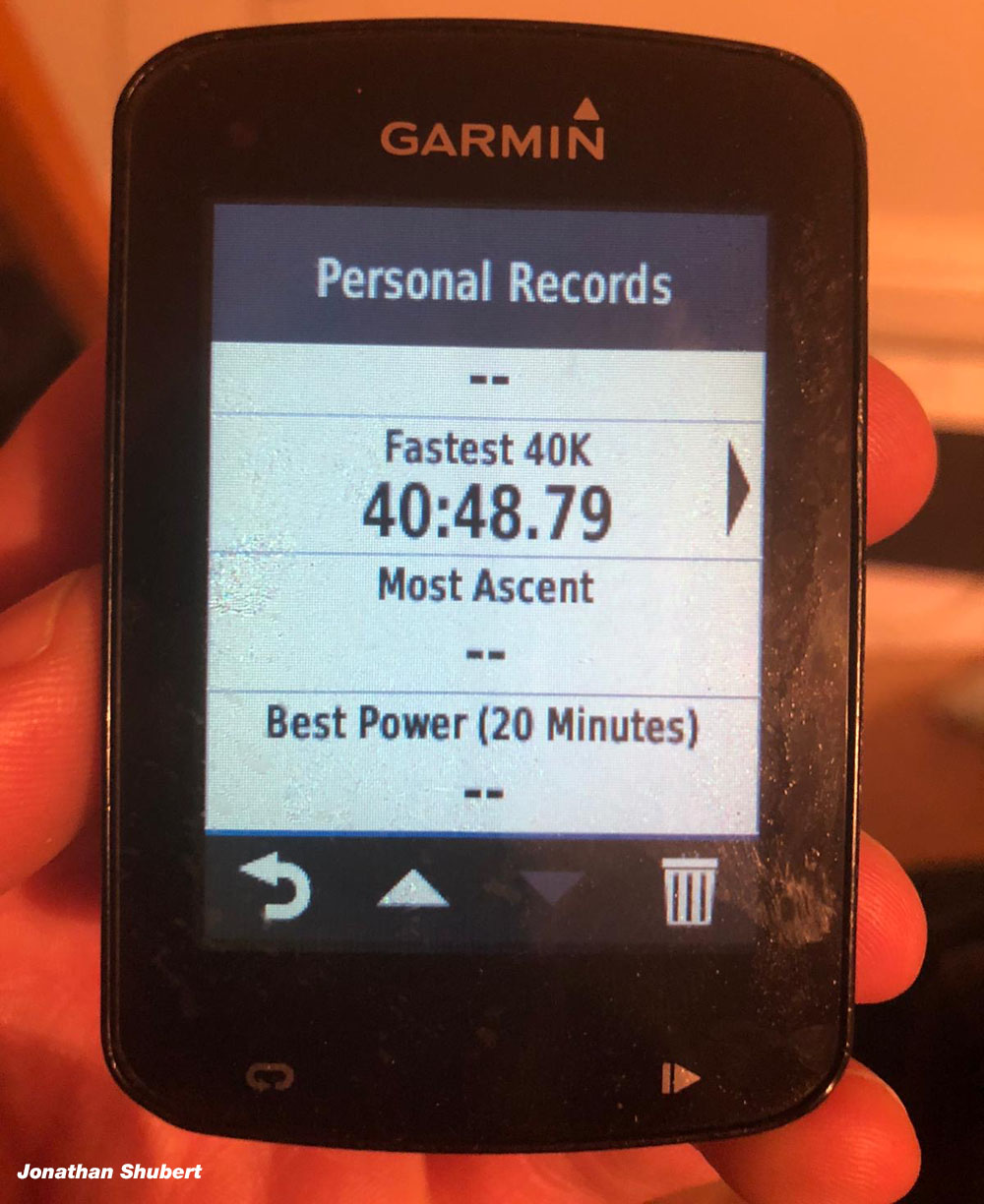 PEZ: Having been off the bike with the chain issue you must feel you could go even faster?
It was 1954 when the first sub four minute mile was run; since then thousands have achieved that but the only one that’s remembered is Roger Bannister who was the first man to do it. I’m happy that I’ll be remembered as the first guy to ride a sub three hour, straight out ‘100’ – I’ll be thrilled for whoever comes along next and breaks my record. But I was the first so there’s no motivation to go again. 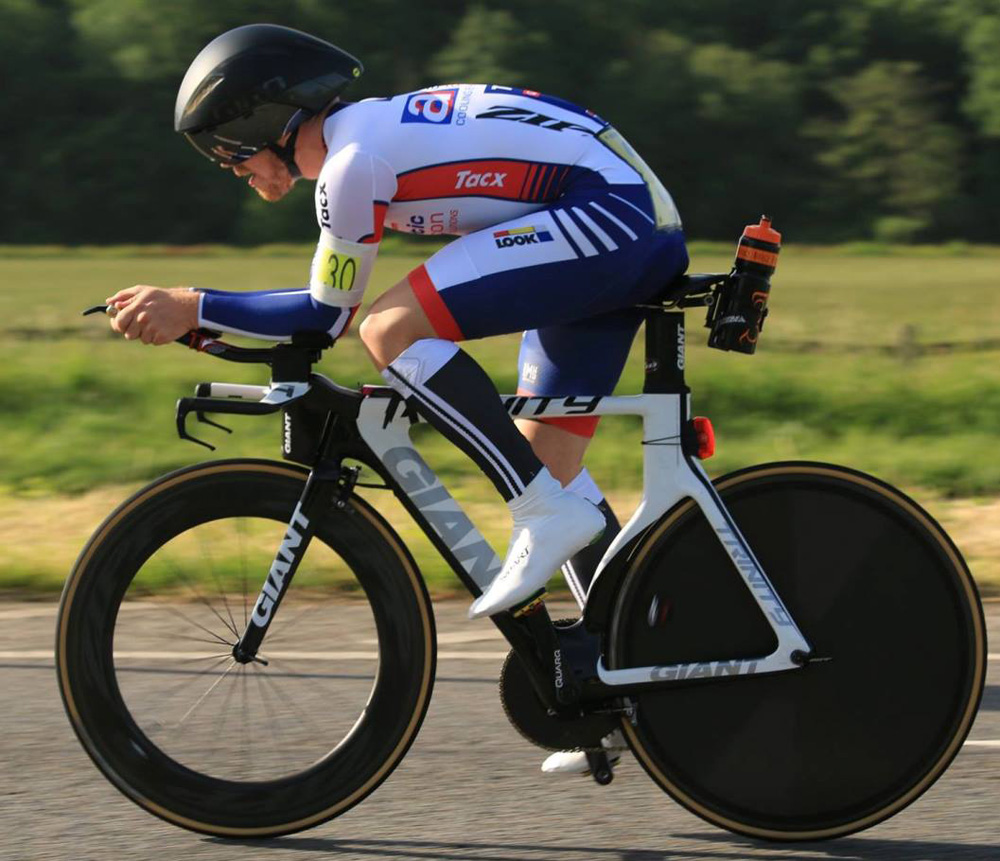 PEZ: What next then?
Good question! Some cycle touring, I think. The End to End is the ultimate, I helped Christina Mackenzie on her courageous but ultimately unsuccessful End to End record attempt last year and found it an emotional, exciting experience – but I remember my Oman record ride and the logistics and costs aspects. But if a sponsor came along. . .

GCN followed Shubert on his ride

# With thanks to Michael Broadwith for organising the interview and to Jonathan for his time to talk about a truly epic performance. #