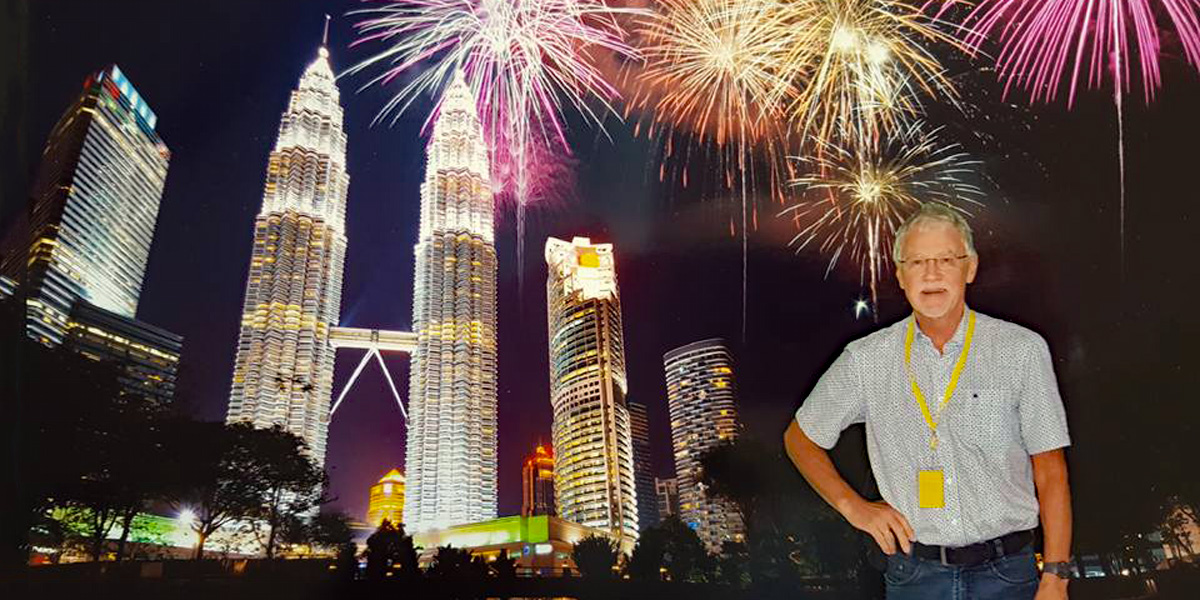 Interview: Ed Hood is suffering terrible with-drawl symptoms from the ‘6 Day’ scene, but he can’t turn his back on the wooden circle. Today he interviews a man who builds velodromes – Sander Douma, a Dutch architect who has been behind some of the best tracks all over the world. 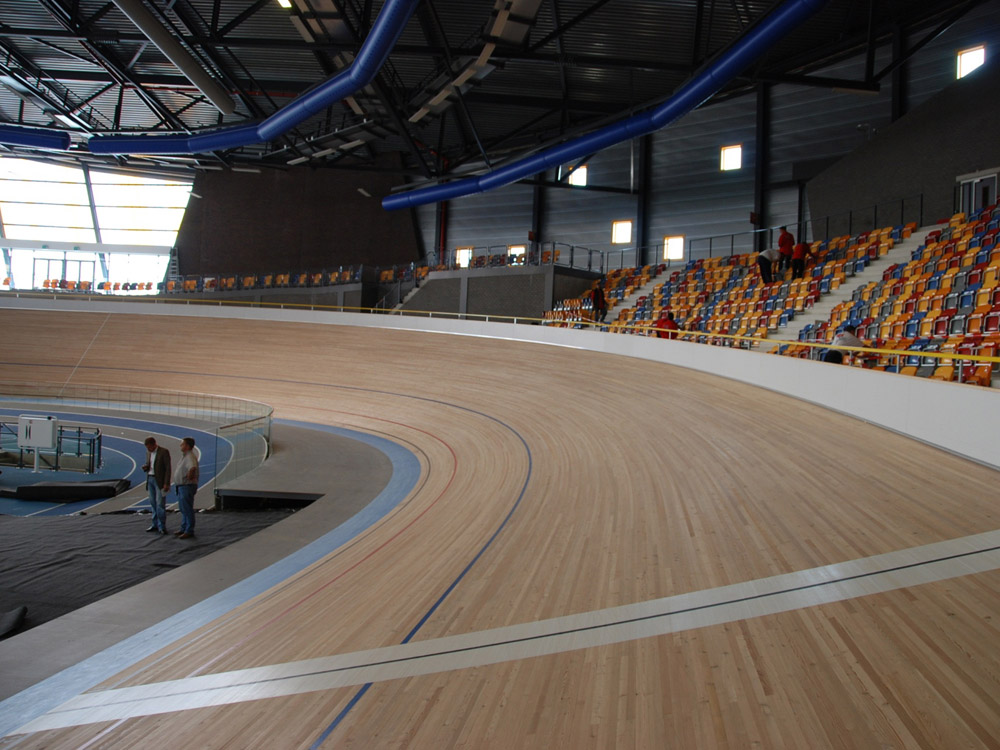 Velodromes, I love them and never cease to be fascinated by the men who create them. Last year we spoke to Czech Maestro, Peter Junek. This piece is about another man who conjures up those speed bowls where history is made; Dutchman Sander Douma. We hope you like this piece as much as we did:

It remains pure magic for Dutch architect Sander Douma, over and over again; the thrill of turning an empty building into a cycling track. “It’s such a great moment when all the material is in the hall; up to 80 kilometres of planks and 400,000 nails. You see the local people looking expectantly. For them, nothing is happening yet. But first we must measure, determine the datum line and exact heights. I always see them thinking: ‘Is there something going on?’ Within a week the frames are up and you can already see the three-dimensional form of a beautiful cycling track. We place the furniture in it, as it were, like a kitchen in a house.”

In his office in Stompetoren in The Netherlands Douma (76) has designed dozens of velodromes over the past forty years, which he built all over the world. From Alkmaar in his native Netherlands to Omsk in Russia, from Rio de Janeiro in Brazil to Mashad in Iran. “This is Yichun in China,” says the architect and former cyclist, leafing through a pile of pictures, patently in love with the images of his creations. “It’s a beautiful outdoor piste.” 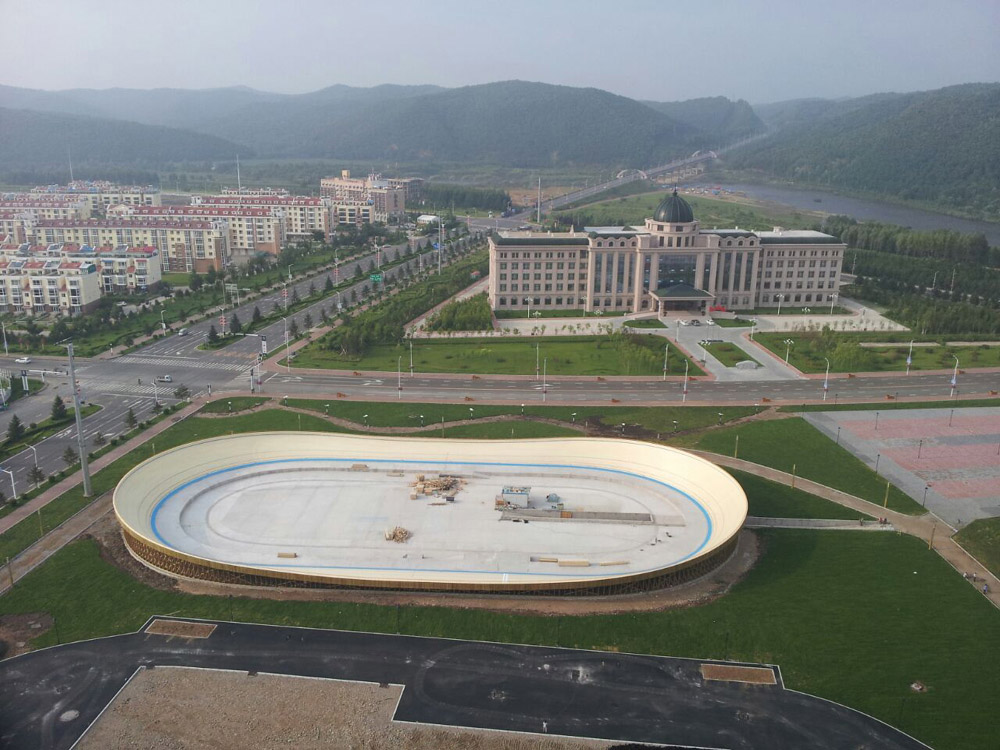 He builds them in all shapes and sizes. Inside or outside, fixed or demountable. There are 500 metre, 333 metre, 250 metre and 200 metre creations. With tight, steep turns on the small tracks but flatter and wider on the big tracks. He’s designed in concrete, asphalt and wood.
Wood is still the most beautiful. But one wood is not the other. Many indoor tracks were made of Siberian pine, we used it in Plovdiv in Bulgaria, Omsk in Russia and Jincheon in South Korea. It’s spruce or pine, a soft type of wood that will eventually become a bit harder as it matures.

When Douma started renovating the Alkmaar track, almost around the corner from his office he opted for Northern European larch, also known as ‘Larix.’ Why?
Moscow’s old 333-meter Olympic track was made of larch. I knew that it rode very fast. Larix is ​​originally harder than pine and matures hard.

It’s logical that Douma again opted for Larix when asked to build a track in the brand-new Omnisport Centre in Apeldoorn in 2008. But the wood suddenly started to splinter after six years, he explains:
There was a problem with the humidity in the hall. It should have been between 40% and 60%, but it was actually only 25%. In those circumstances, Larix dries out and becomes sensitive to splintering.

A legal conflict between the municipality and builder was narrowly prevented.
I suddenly received a letter from an expensive law firm. I’m a strong person but didn’t want a legal battle. The solution lay in Georgia and China. Around the same time, we built a 200-meter track in Tbilisi, Georgia and a 250-meter track in Yichun in China, both were outdoor velodromes. Tropical hardwood was a material we often used, but that was becoming increasingly politically sensitive. I came into contact with a company from Arnhem that modified Radiata pine wood – also known as Monterey Pine. They called it Accoya. The Accoya wood production process takes sustainably-sourced, fast growing softwood like Monterey Pine and, in a non-toxic process, creates a durable and stable ‘modified’ wood. You may remember hardening ‘conkers’ – chestnuts – with vinegar as a child? This process works in much the same way. Due to the changed chemical structure, they could give a 25-year warranty, even in the open air. It looked beautiful in Tblisi and Yichun.

Douma ultimately convinced the Apeldoorn politicians that to use Accoya was the solution.
We talked for a long time, did research, went to the factory and the decision was made to re-board the track with Accoya.

Is it expensive, building a cycling track?
Eight or nine million in Euros. That depends on the extras that need to be added. A wide safety zone? A glass wall on the inside? I always say that if you’re building a track it’s better to spend the extra 1,500,000 Euros and upgrade from Siberian Pine to Accoya, it’s simply the best. Apeldoorn is now in my opinion the perfect cycling track. 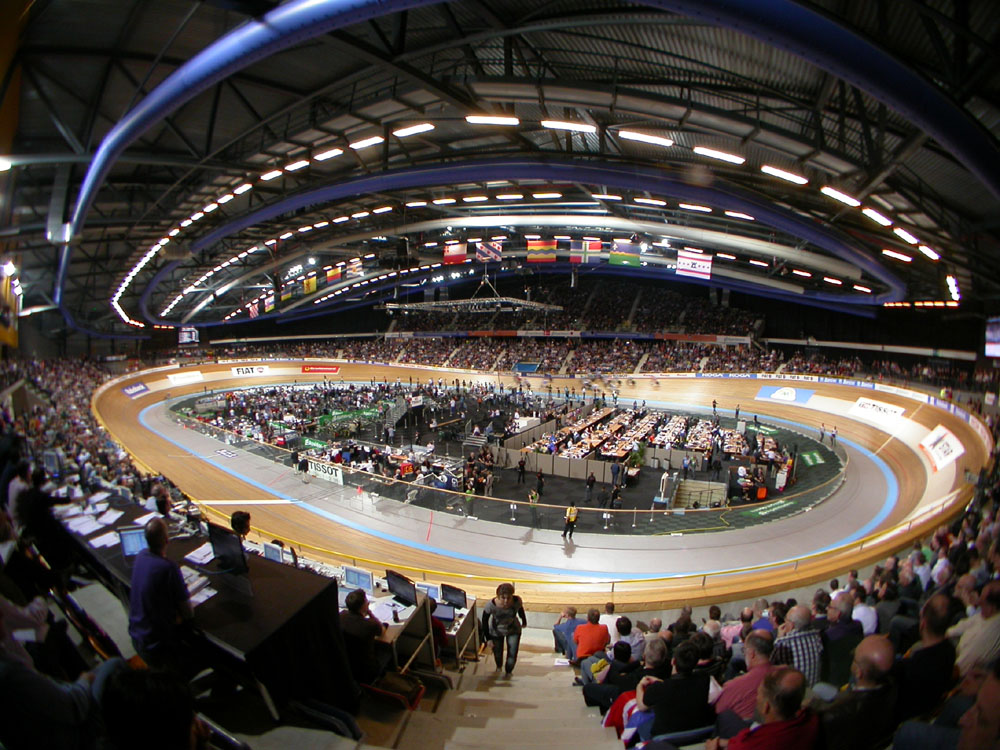 Apeldoorn is now a beautiful calling card for Douma.
I’ve done so many jobs, so many shapes. With the radius of the bend you are between 19 and 23 meters, that’s quite a difference. I’d rather see a wider curve. Apeldoorn has approximately 22 meters. The angle of inclination is a simple calculation with centrifugal force. The tighter the turn, the steeper it should be. A rider must be able to reach 85 kilometres per hour without ‘flying out’. That’s the upper limit, they never go as fast as that. Sometimes this results in a steep wall in the bends, as in the monumental Kuipke in Ghent. That track is 166 meters, the angle of the bankings then will be about 50 degrees. We put the available length and width into our computer program to give us our angles and dimensions.

Douma travels the world with a permanent team of fourteen employees.
We screw and fill the bottom boards then after two or three battens it will be nailed to the top. The carpenter’s eye remains crucial. Also for datum lines, they have to be to the millimetre. 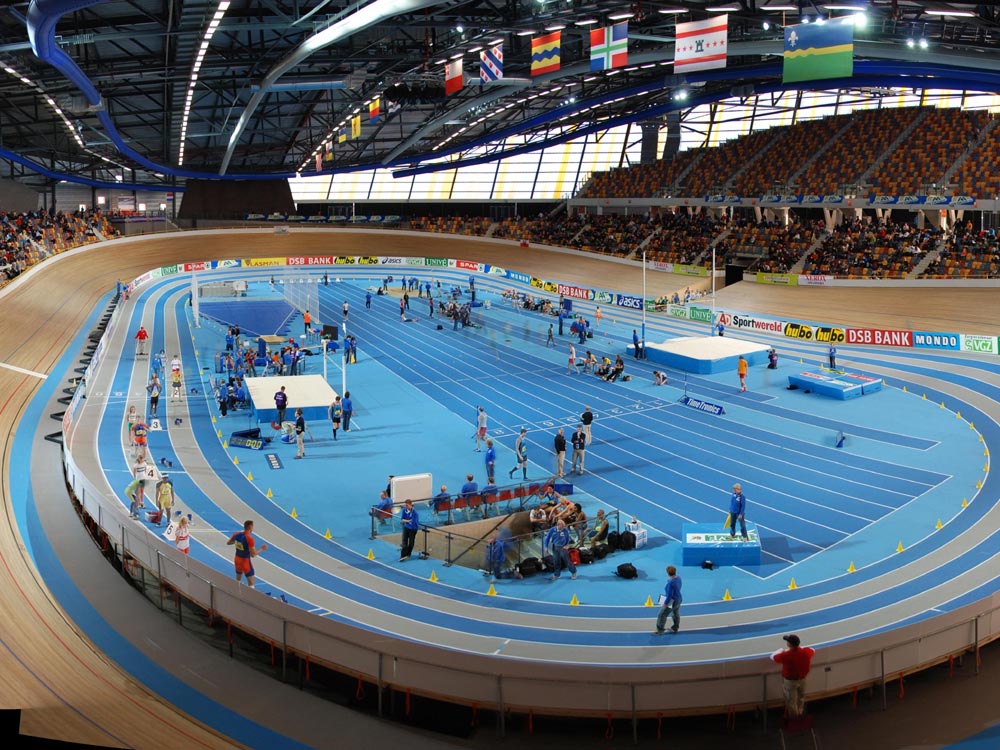 An image of the concrete Mexico City concrete track passes by, where he applied a special epoxy coating in 2003.
On the bottom meter of the track, for the world hour record of Leontien van Moorsel.

And on the subject of world hour records; just like every ice master wants the fastest ice, Douma wants the fastest cycling track.
You can compare it to ice rinks, yes. At one point I had three world hour records: Leontien in Mexico, Boardman in Manchester and Matthé Pronk in Alkmaar behind the derny. Two records also fell at the World Cup at the beginning of this year in Apeldoorn. Then your job is done, isn’t it?

What about playing with the air currents in the hall as happens on ice rinks?
I once thought in Apeldoorn not to let the blowers blow down, but in the direction of travel – but that is prohibited. Nor do we normally do surface coatings; then it becomes too slippery. 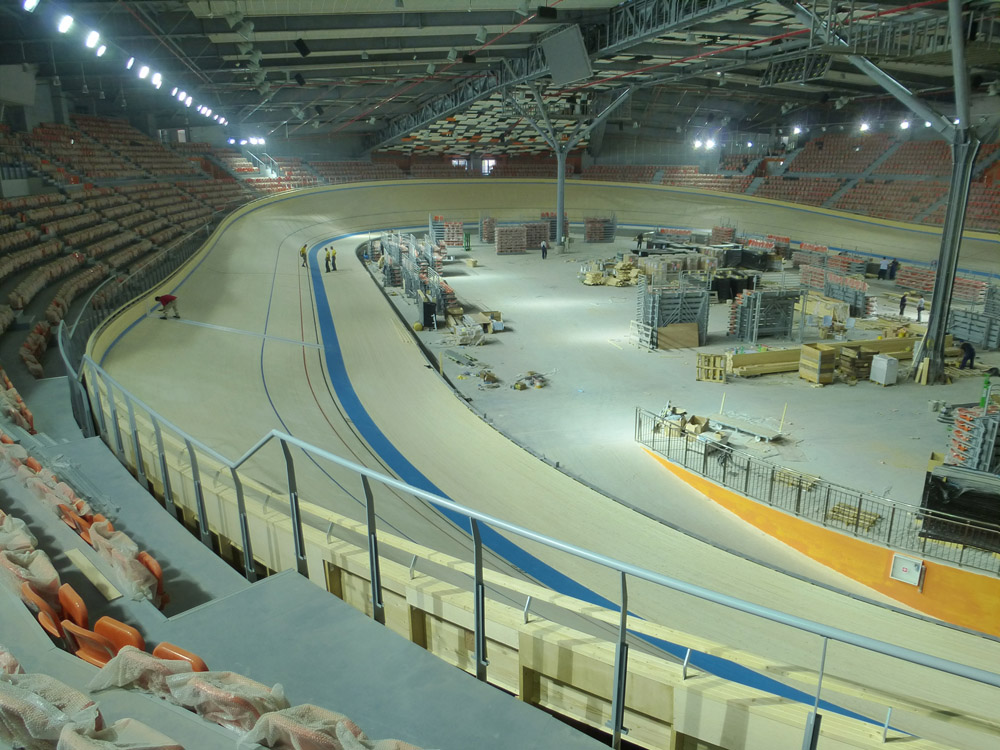 Creating fast courses and records are beautiful but it’s even more beautiful to see a lot of the world, thinks Douma.
We work ten hours a day, Saturday six or seven hours, and if appropriate we have one day off a week, to see the culture.

Where’s Special to him?
Iran has a special place in my heart. Sad to see what international politics makes of it; the people themselves are very warm and hospitable, it’s a beautiful country.

He has just returned from Oman, then there are appointments to come in Indonesia and Japan.
Yes, it’s true, I’ve travelled all over this world, thanks to velodromes. . . 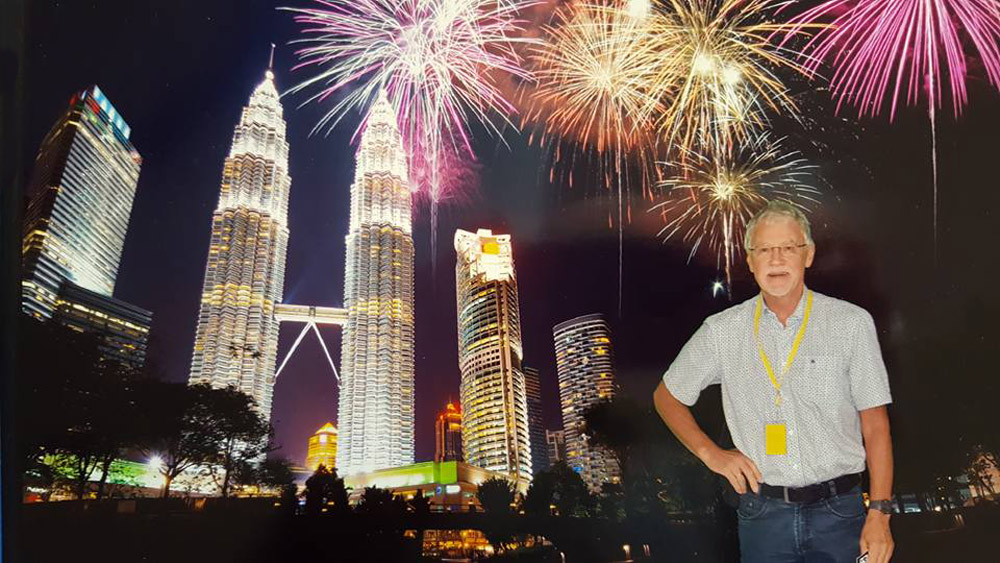 # Thanks to Sander Douma for the interesting interview and photos. Ed looks forward to watching some track racing and especially a ‘6 Day’ on one of his tracks. #