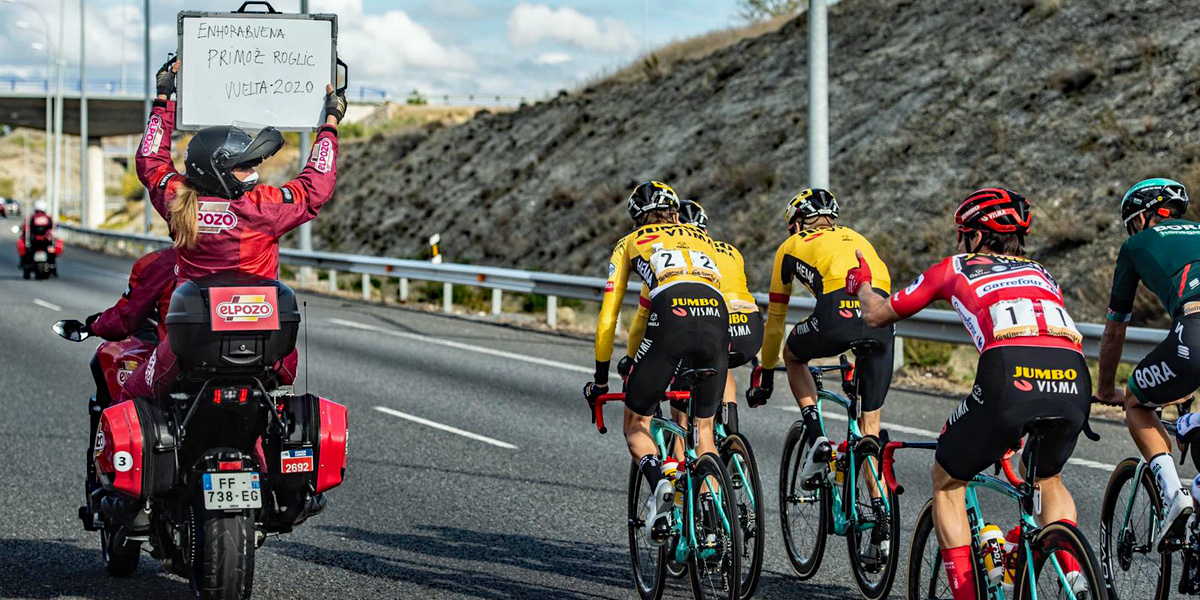 Vuelta Stage Report: After the disappointment of the Tour de France, Primoz Roglič (Jumbo-Visma) took his second overall win in Vuelta a España. The final stage was no ‘stroll in the park’ as the top sprinters wanted the final win of the season. Pascal Ackermann (BORA-hansgrohe) and Sam Bennett (Deceuninck – Quick-Step) fought out the sprint for the photo finish to give the win to fast German. 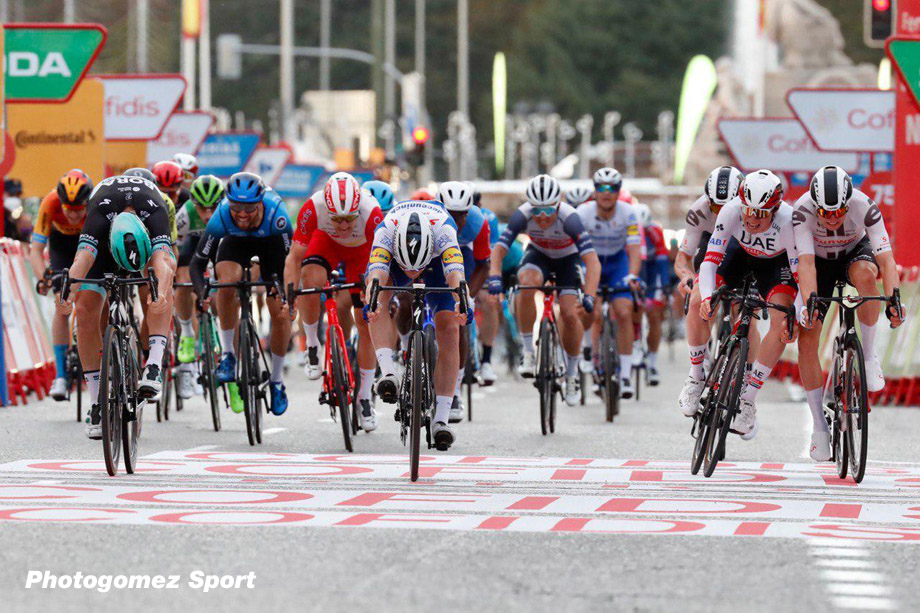 A very close finish to the final stage

The final stage of the Vuelta a España 2020 was won by Pascal Ackermann. The German sprinter was the best in the traditional stage to Madrid after 139 kilometres. Primož Roglič won the final general classification for the second year in a row. 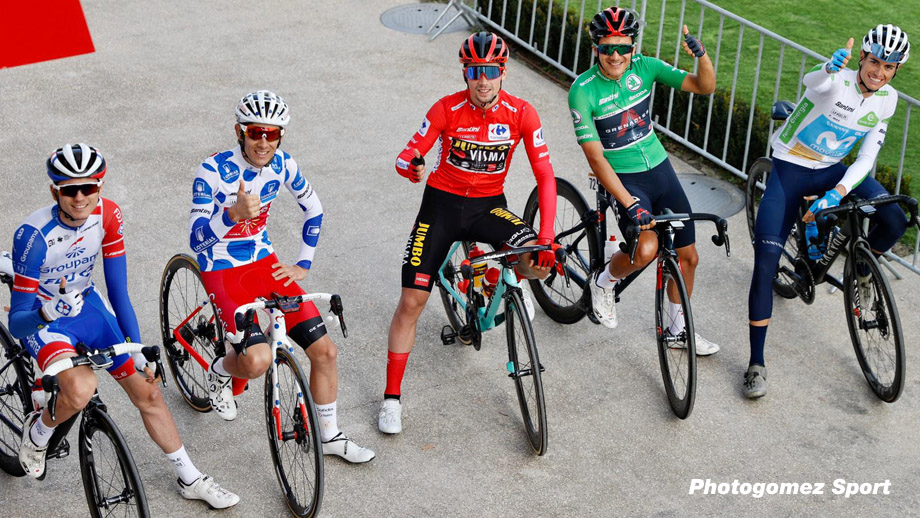 Stage 18. Hipódromo de la Zarzuela > Madrid – 139,6 km
The final day of La Vuelta 20. After nearly three weeks of battle, the heroes of the last race of the 2020 season are ready for a final day of action to Madrid. The start was set at 13:20 in Hipodromo de La Zarzuela. The riders will enjoy themselves on the way to Madrid, where they’ll battle it out on the closing circuit.

Fernando Escartín’s Comment: “Final day that will serve as a tribute to the rider wearing La Roja. It will consist of a short route, where riders can ride slowly, but with an intermediate sprint and an arrival for explosive sprinters, which may decide who wins the green jersey.” 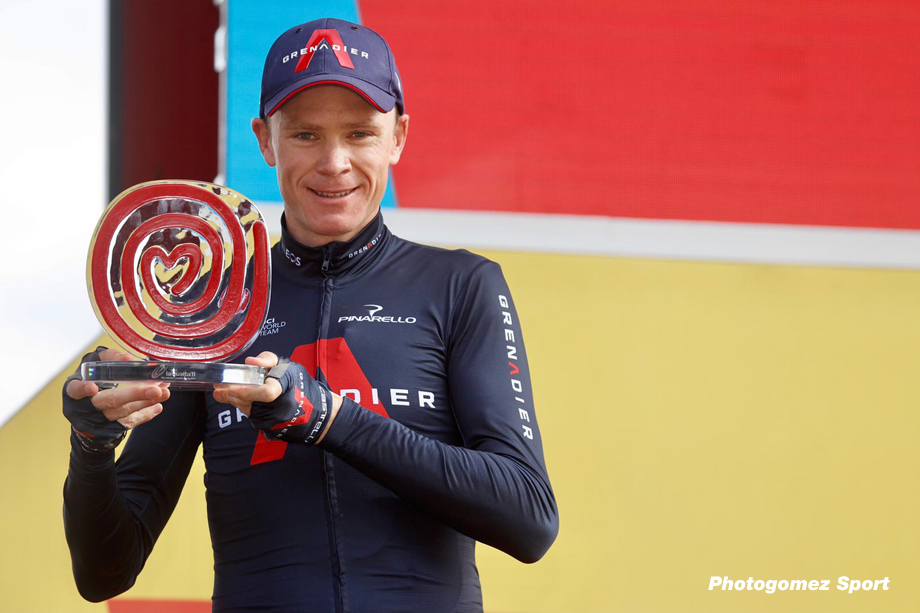 Chris Froome got his trophy from La Vuelta 2011

The peloton left the Hipódromo de La Zarzuela, a horse racing track on the outskirts of Madrid, for the last stage of this Vuelta. Davide Formolo was missing, the Italian was about to become a father and had to miss the final stage. Rémi Cavagna was named the most combative rider of the Vuelta. 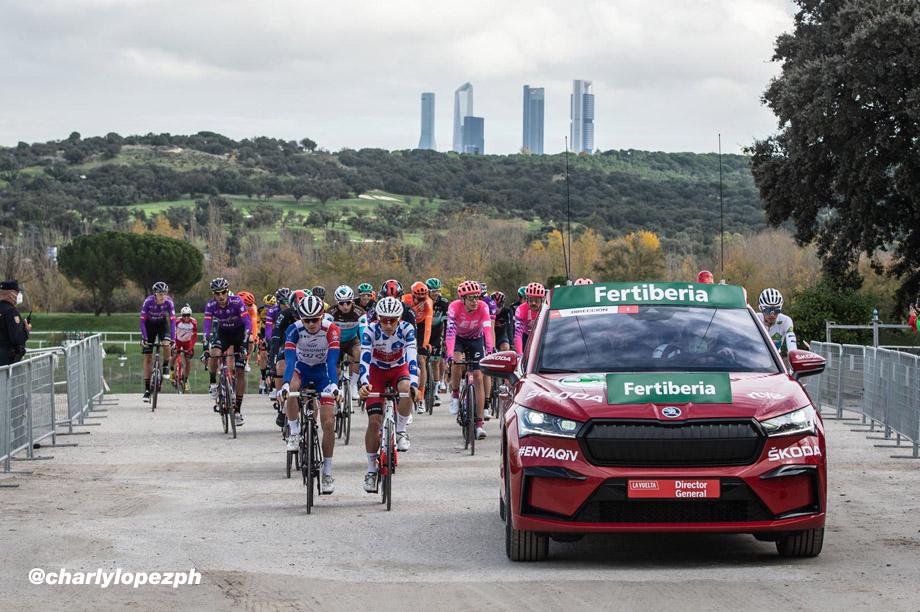 The start of the last day 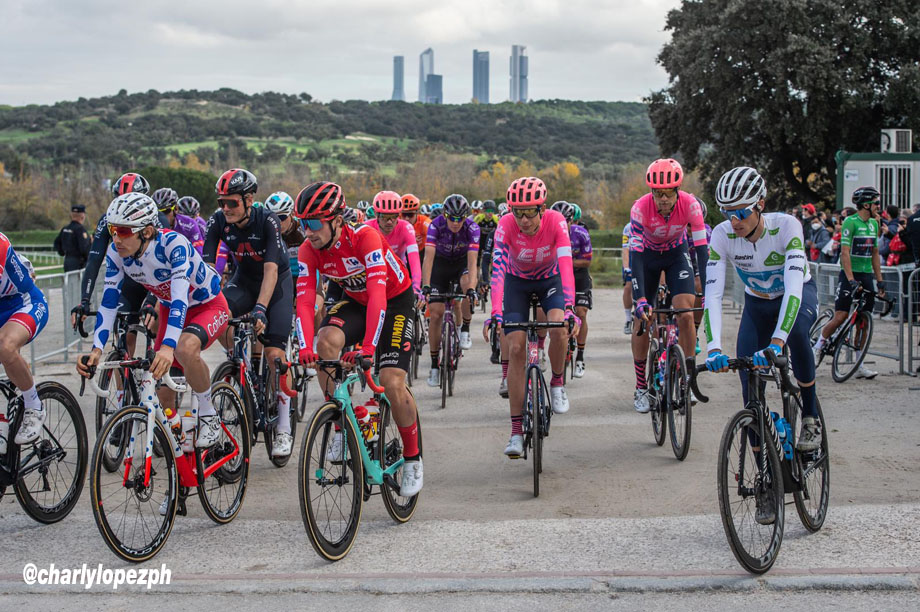 The leader’s jerseys roll out

There was the usual celebrations with cava (well, it is Spain), photo opportunities and many smiling faces. Jumbo-Visma led the peloton to Madrid with Primož Roglič at the head of affairs. Just less than 40 kilometres from the finish, the riders turned onto the local 5.9 kilometre circuit in the Spanish capital city. 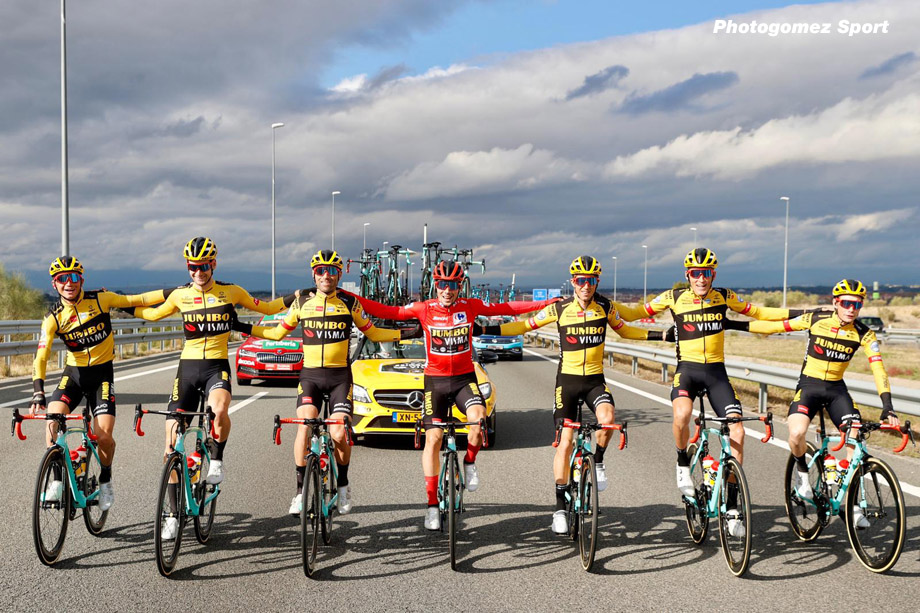 The first serious attack came from Tim Wellens and Willie Smit. They had sprinter teams Deceuninck – Quick-Step and BORA-hansgrohe chasing behind. Jonathan Lastra was with them, but he could not keep up with Wellens and Smit. Gonzalo Serrano and Dmitriy Gruzdev then made the crossing. The four drove away for a 20 second lead. 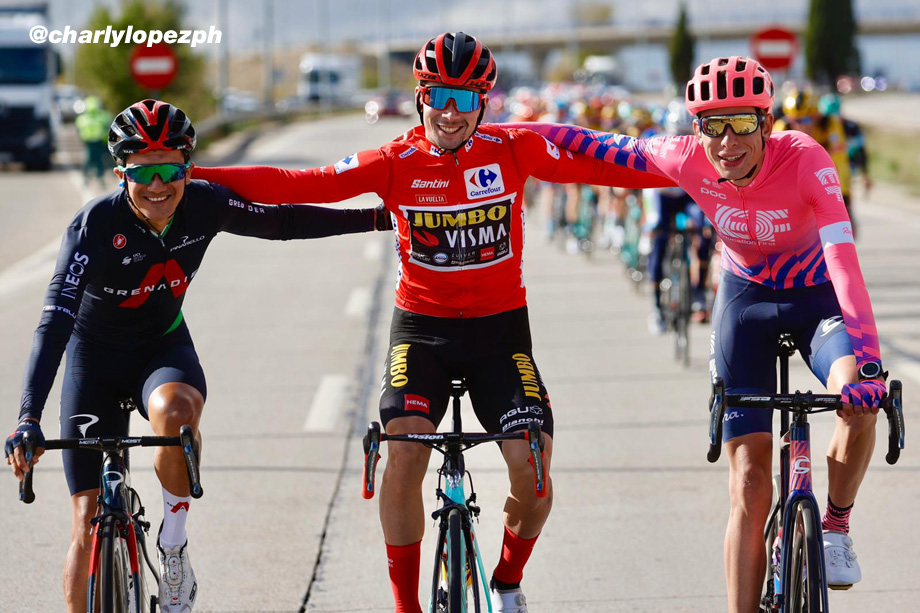 Jasper Philipsen’s UAE Team Emirates also put a man at the front of the peloton to pull back the escape, and the plan succeeded at 6 kilometres from the finish. Then it was all hands on deck for the final sprint in Madrid, with all the sprint trains running at high speed, at up to 70 kph. 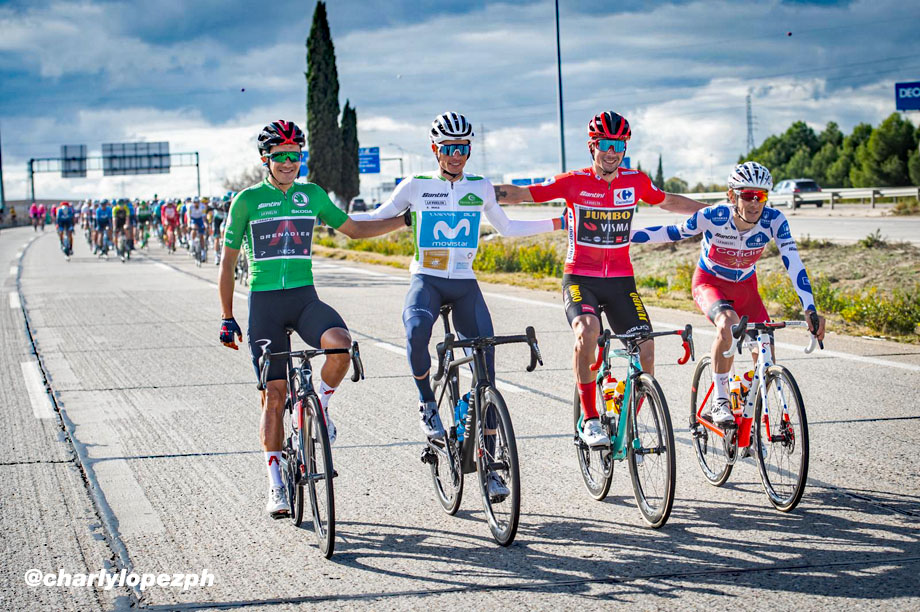 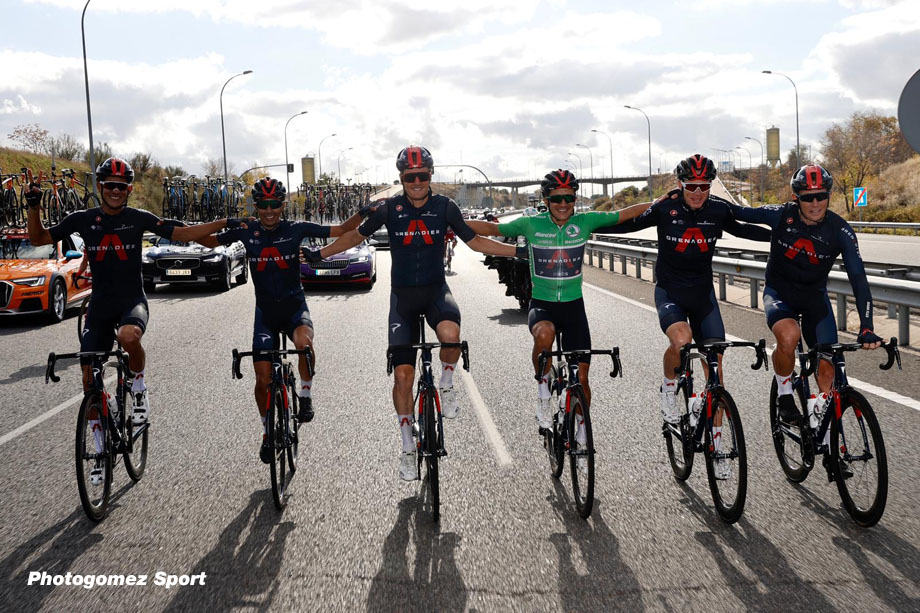 BORA-hansgrohe took the lead in the last kilometre for Pascal Ackermann. Sam Bennett looked to have pushed his wheel over the finish line before the German, but after a look at the photo-finish, Ackermann was given the win on the line. Max Kanter was slightly faster than Jasper Philipsen in the battle for third place. 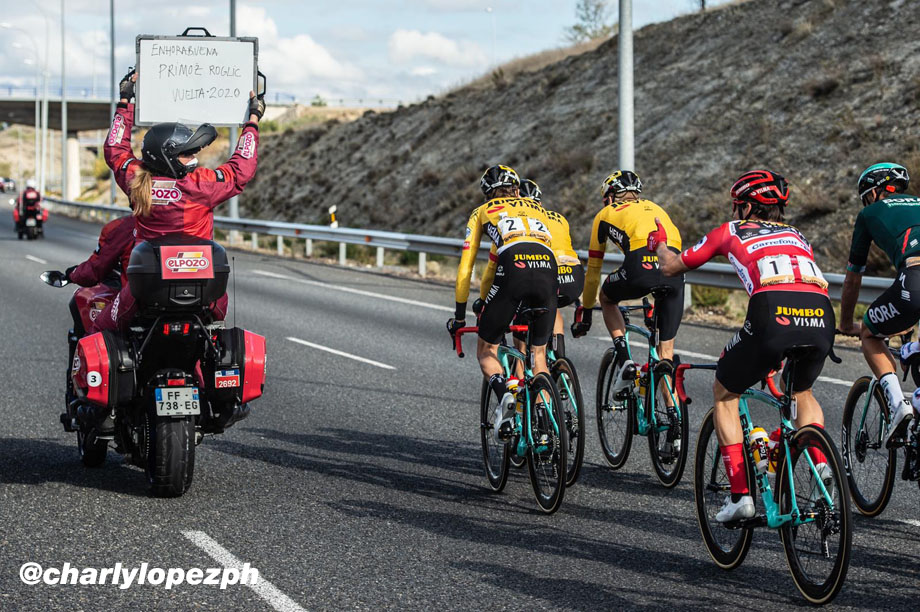 On the final podium in Madrid, Roglič was flanked by Richard Carapaz (INEOS Grenadiers) and Hugh Carthy (EF Pro Cycling). Roglič also received the green points jersey. The Slovenian is the first rider in 43 years to be the leader in the points classification of the Tour of Spain from start to finish. 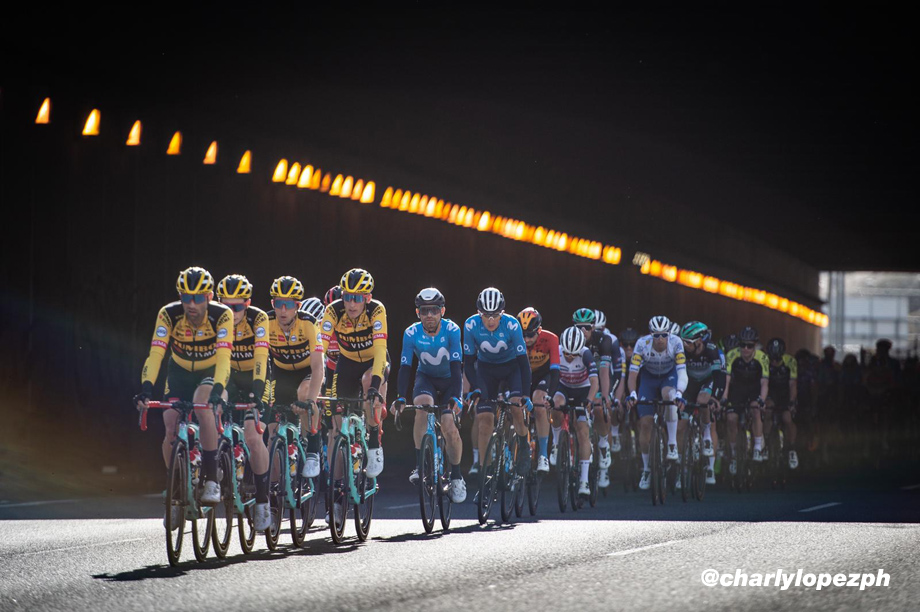 Jumbo-Visma still in charge of the peloton

The mountain jersey was awarded to Guillaume Martin (Cofidis), who convincingly won the KOM classification. The white young rider jersey was taken by Enric Mas (Movistar), with David Gaudu and Aleksandr Vlasov well behind him. As usual, the team classification went to Movistar. 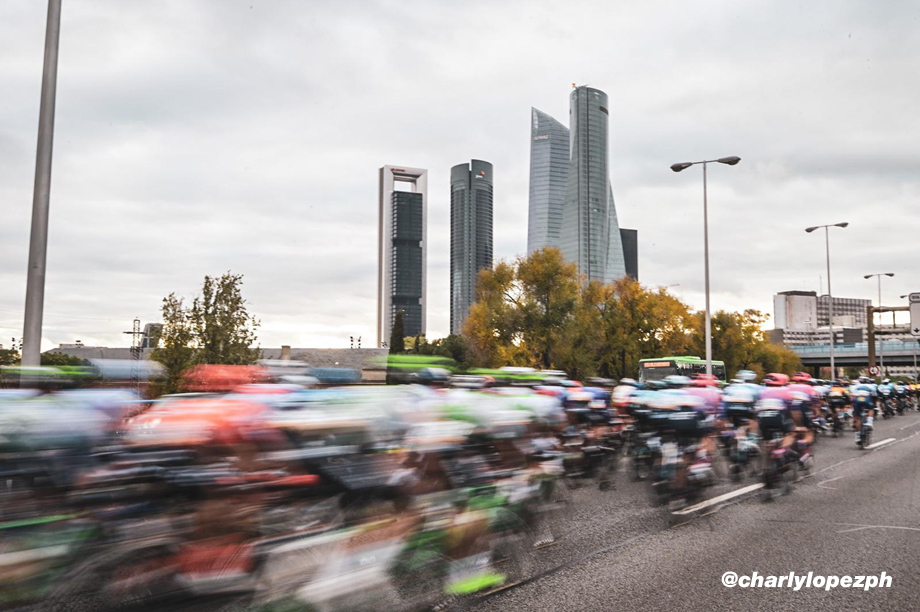 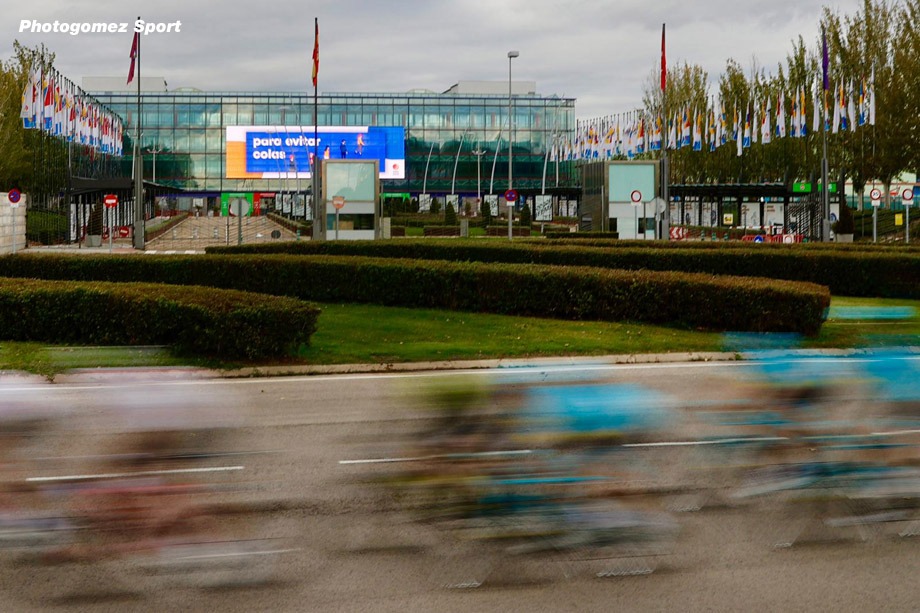 Stage winner, Pascal Ackermann (Bora-Hansgrohe): “I wasn’t sure, I was asking Sam [Bennett] who won. I was really unsure and we had to wait after the finish and we got the message in the radio. We’re so happy about the victory today. I really have to say thank you to my teammates. Today was an amazing lead-out. I’m really happy to finish the season with a victory. It’s also my 13th victory of the season and I’m just so happy I can say thank you to my teammates. I still think I only won one stage, I’m not really counting the one where Sam was relegated. Now everyone has one victory and we can all be happy with that.” 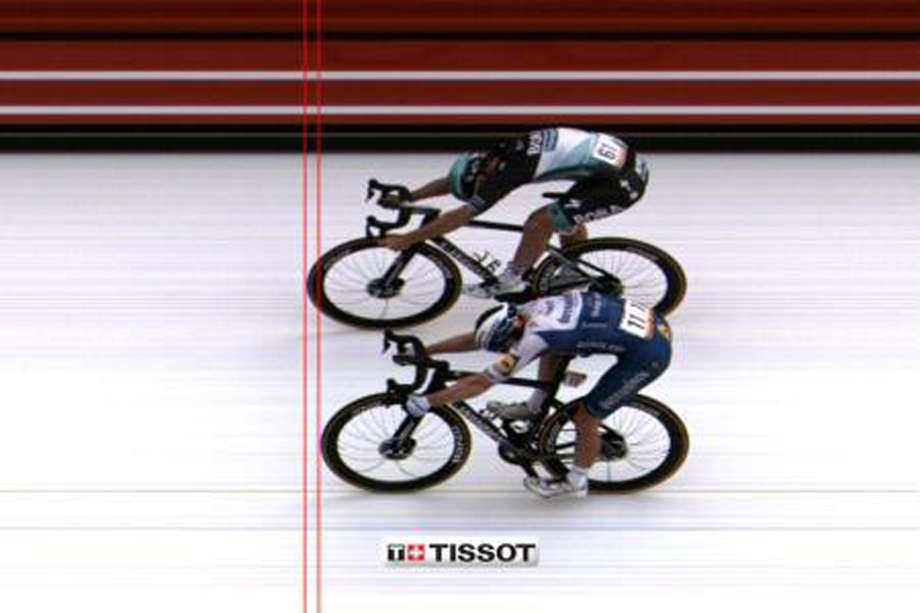 Ackermann by the slimmest of margins

Final overall winner, Primoz Roglic (Jumbo-Visma): “We were just enjoying. It was the last one to do and we did it. It’s beautiful to finish the season like this. I always say every victory is beautiful. It’s really hard to win. So it’s difficult to compare [with 2019]. I’m just super happy that I could win and to finish the season like this. I don’t know [if I’m the best Grand Tour rider]. For sure I was the best in this Vuelta. There are still races I didn’t win yet, more challenges, but first of all today we celebrate.It was a special year. I wish everyone a good health. Definitely I would like to thank the organisers. They made it happen, we could still race in November. The race was really well organised and I enjoyed every single day. I want to thank all the riders, specially my teammates. I also received a great support from home, from my family even if they’re not here at the moment. It’s really beautiful to win the red jersey and the green jersey to finish this year. See you next year.”

# The Vuelta a España brings down the curtain on a very strange, but exciting 2020 season. Let’s hope 2021 is a better year for everyone. Thanks for joining PEZ on the ‘virtual’ roadside. #