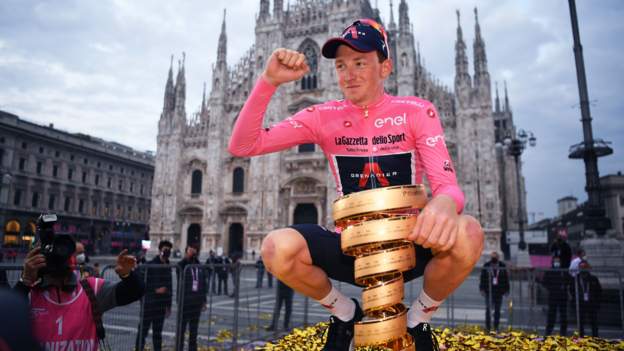 “I think one of Tao’s great attributes is that he’s a great racer,” Brailsford told BBC Radio 5 Live.

“He’s got a nose for it, he can feel a race. It’s something really cool about a whole new generation of young guys coming along now and they’re really, really good racers. It’s very fun to watch.

“The sport’s changing, it’s getting more dynamic, so he’s leading the way, really, for a new generation of youngsters, which is incredibly exciting to see.”

Brailsford, who believes the “sky is the limit” for Geoghegan Hart, added: “I think you get a lot of youngsters come along and they like the idea of being at the very top, but a certain few have that grit and determination, I think.

“In Tao’s case, he’s got that grit and determination, without a doubt.

“He’s an intelligent young man, he’s quite calm and he takes everything in his stride step by step, and very balanced. I think he’s put that all together with his incredible physical ability and off he goes.”

In only his fourth Grand Tour, Geoghegan Hart began the race as one of Thomas’ domestiques and was in 126th place after the opening stage.

But he won Saturday’s stage 20 to share the lead with Jai Hindley before the final stage, in which he finished 39 seconds ahead of the Australian in the 15.7km time trial.

“It’s an exhilarating story, because back when we launched Team Sky in London, we did a ride around Richmond Park and Tao bunked off school for the day and he came along,” said Brailsford.

“He rode behind the guys, behind Bradley and other guys and his ambition was to try to be a pro cyclist and make the team.

“He was only a very young boy then. Here we are 10 years later and he’s won the Tour of Italy. It’s a fairytale story.”

Speaking on Eurosport, former Tour de France winner Wiggins said: “He’s just the nicest guy. He’s never once said he’s going to do this. He just wanted to be a professional cyclist and emulate his heroes.

“In some ways, he’ll think he’s not worthy of it and doesn’t really deserve it. He won’t change from this, this will do him. He’ll retire happy now if he wanted to. That’s my worry.

“I hope he kicks on from this and gets the opportunity to do it in the Tour de France and we can talk about him for the next 10 years.

“He’s a worthy, worthy champion and everything this country needs as a role model in sport.

“This guy is young. I hope Tao gets his reward and his standing in this sport.”

Who is Tao Geoghegan Hart?

Geoghegan Hart grew up in Hackney in east London, where he joined Cycling Club Hackney.

He is also a keen swimmer and at the age of 13 was part of a group of teenagers who swam across the English Channel.

He initially joined Team Sky as a stagiaire (amateur rider) in 2015 and later signed for the British team, competing full-time on the top-tier World Tour since 2017.

He has remained with the team, who became Ineos in 2019, ever since.

His previous best finish at a Grand Tour was 20th at the Vuelta a Espana in 2019.