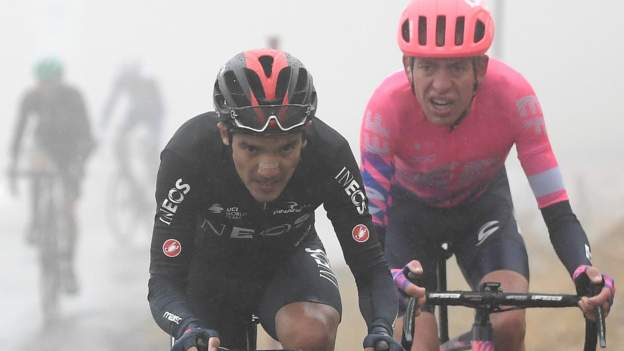 Richard Carapaz took the overall lead from defending champion Primoz Roglic on a wet stage six of the Vuelta a Espana.

Ineos Grenadiers rider Carapaz dropped Roglic, who had led since the opening day, on the final ascent of the 146km mountain stage to Aramon Formigal.

Ion Izagirre attacked with 3km remaining to take the stage, 25 seconds ahead of Michael Woods and Rui Costa.

Ecuadorian Carapaz, who won the Giro d’Italia with Movistar last year, crossed the line 55 seconds behind Spaniard Izagirre, alongside France’s David Gaudu and Spaniard Marc Soler, with Roglic a further 43 seconds back.

Jumbo-Visma’s Roglic slipped to fourth overall, with Ireland’s Daniel Martin’s 18th-place finish moving him up to third, 20 seconds off the lead.

Roglic blamed problems putting on his rain jacket on the penultimate climb for losing time to his rivals.

“It is not the way we wanted it, but at the end I give it all to do my best,” the Slovenian said.

“As long as we are still in one piece the show will go on. It’s not finished yet.”

Monday is a rest day, while stage seven of the shortened 18-stage race on Tuesday takes the riders 160km from Vitoria-Gasteiz to Villanueva de Valdegovia.