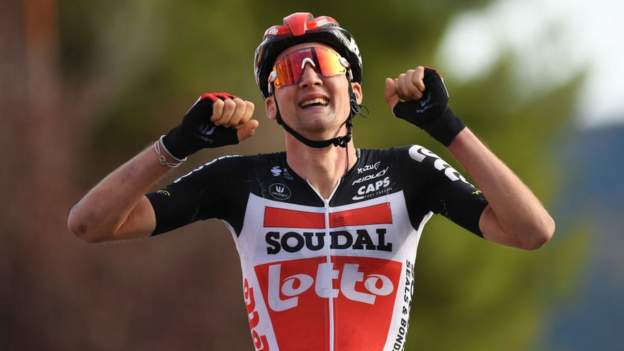 Tim Wellens beat Guillaume Martin in an uphill sprint to win stage five of the Vuelta a Espana as Primoz Roglic kept the overall lead.

Wellens, Martin and Thymen Arensman broke away with 75km left in the 184km stage from Huesca to Sabinanigo, before the Belgian powered clear late on.

Martin, who won stage three, was involved in a crash near the finish but did not lose any time on defending champion Roglic.

“I had a difficult period and I was a bit scared coming to the Vuelta, but I’m super happy with this victory. It’s nice it came so early and now the next two weeks are without stress.”

Stage six of the 18-stage race – originally scheduled to finish at the top of the Tourmalet – takes the riders 146km from Biescas to Sallent de Gallego.