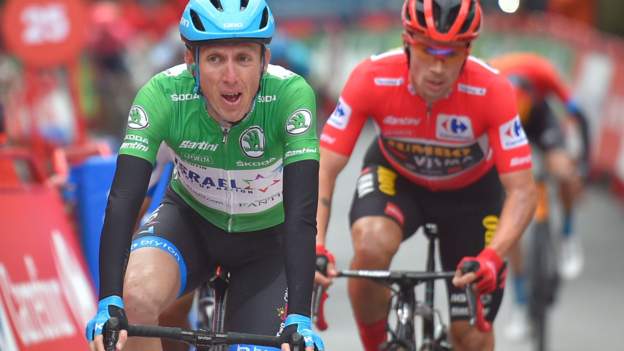 The 34-year-old Israel Start-Up Nation rider attacked in the last 200 metres of the climb to Laguna Negra’s summit, holding off defending champion Roglic.

Britain’s Hugh Carthy finished eighth for the second day in succession and moved to fifth overall, but is 38 seconds off the pace.

Chris Froome was more than seven minutes back and is 77th overall.

It was a first victory since July 2018 for Martin, who will be joined at Israel Start-Up Nation next season by Froome.

“The team was amazing, every single one of them played a part in the victory. It’s part for them, and part for my wife. This is the first time I’ve won a race since my kids were born and it’s really special,” said Martin.

On another rainy day, which started with the news that French rider Thibaut Pinot had pulled out because of injury, there were multiple break attempts but the peloton reeled them in on the opening slopes of the final climb.

Colombian general classification contender Esteban Chaves, part of the lead group, suffered mechanical issues with just over 4km remaining and waiting to change bikes saw him slip to eighth in the overall standings, one minute 29 seconds back.

Friday is the first day for the sprinters, with a 192km flat stage from Garay to Ejea De Los Caballeros in Zaragoza.