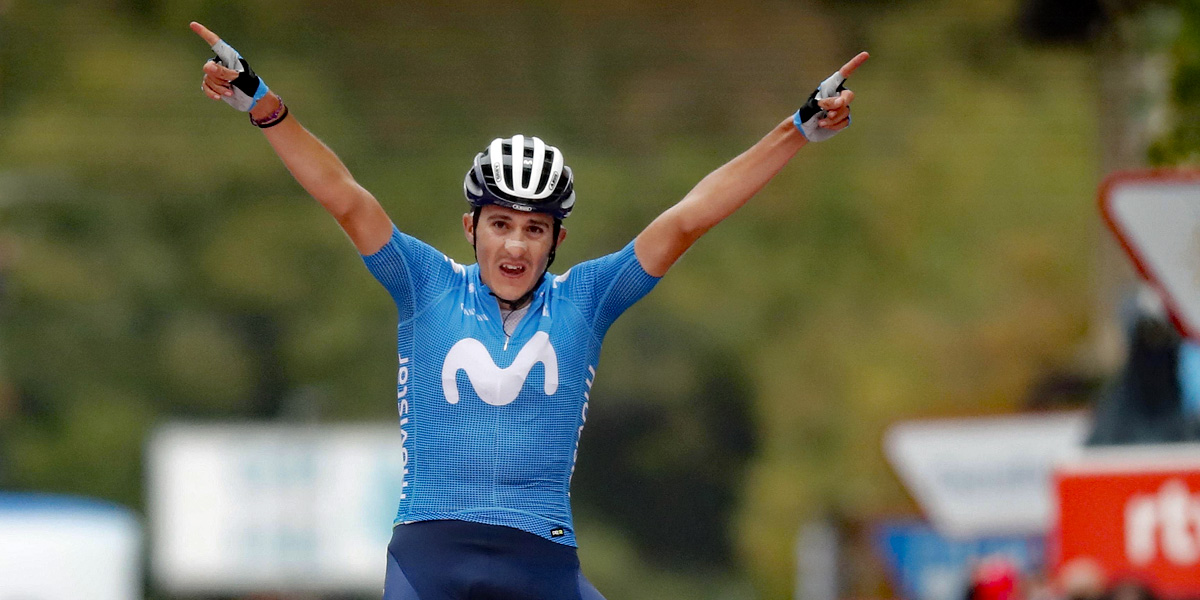 Vuelta Stage Report: Marc Soler won the second stage of the Vuelta 2020. Movistar’s 26-year-old Spaniard crossed the finish line first after a stage of 151.6 kilometres between Pamplona and Lekunberri. He jumped away from the leading group on the descent of the final climb. Overall leader, Primož Roglič (Jumbo-Visma) was second on the stage to hold the red jersey. 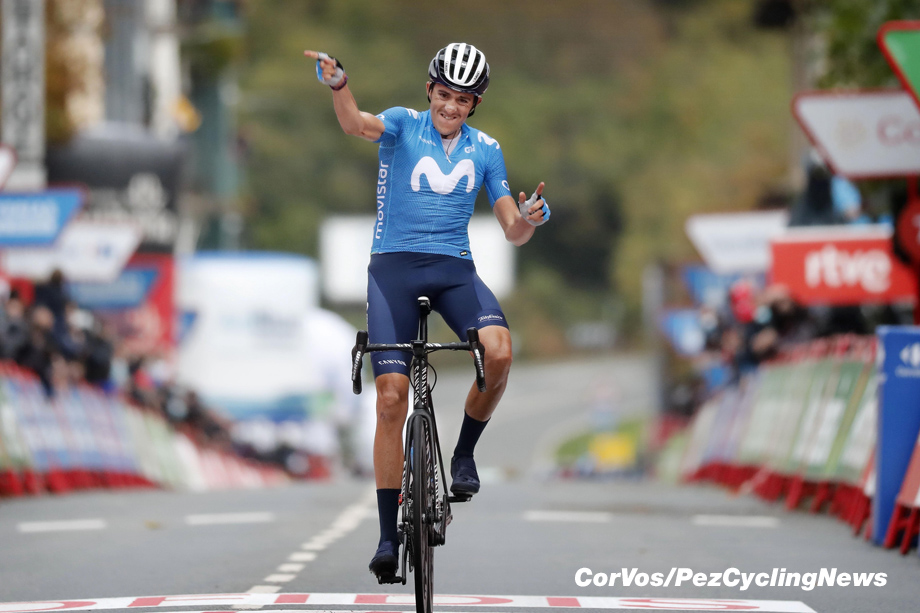 First win for Movistar since February – Thanks to Marc Soler

Stage 2. Pamplona – Lekunberri 151,6 Kilometres
It’s only stage 2 of the 75th La Vuelta, but Primoz Roglič (Jumbo-Visma) already wears “la Roja” as the overall leader and his rivals can seek opportunities to overthrow him on as the race heads to Lekunberri. Along the 151.6km of the day, there aren’t many flat sections, and none of them in the final 25km of the stage, up and down the cat-1 climb up the Alto de San Miguel de Aralar (9.4km at 7.9%, with slopes as high as 15%). 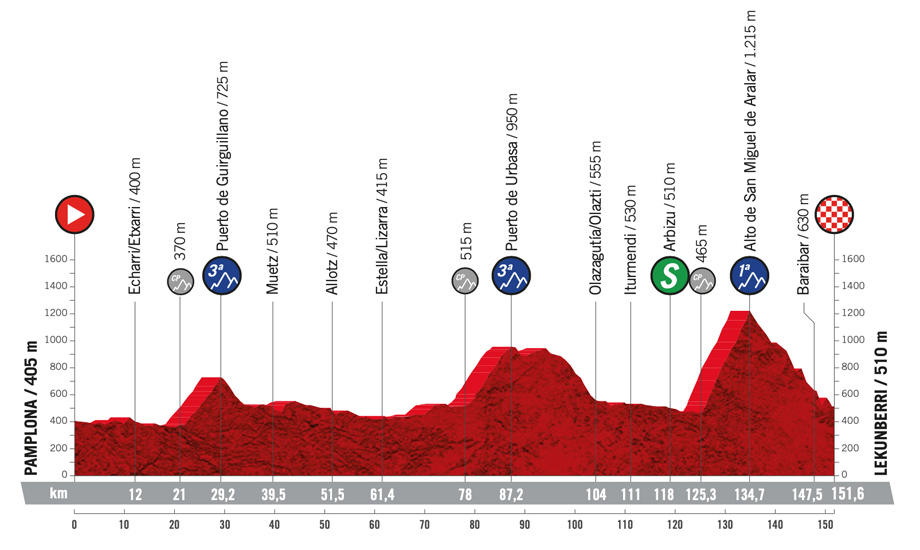 Fernando Escartín’s Comment: “The first flat part will travel along the Ribera del Ebro. The finale, at the San Miguel de Aralar mountain pass (1st category), will finalise the selection that began in Arrate. The climb has numerous concrete stretches that will complicate the race due to lessened grip. Once the mountain pass has been overcome, the descent towards Lekunberri will be fast, meaning that all the differences will be established at the top.” 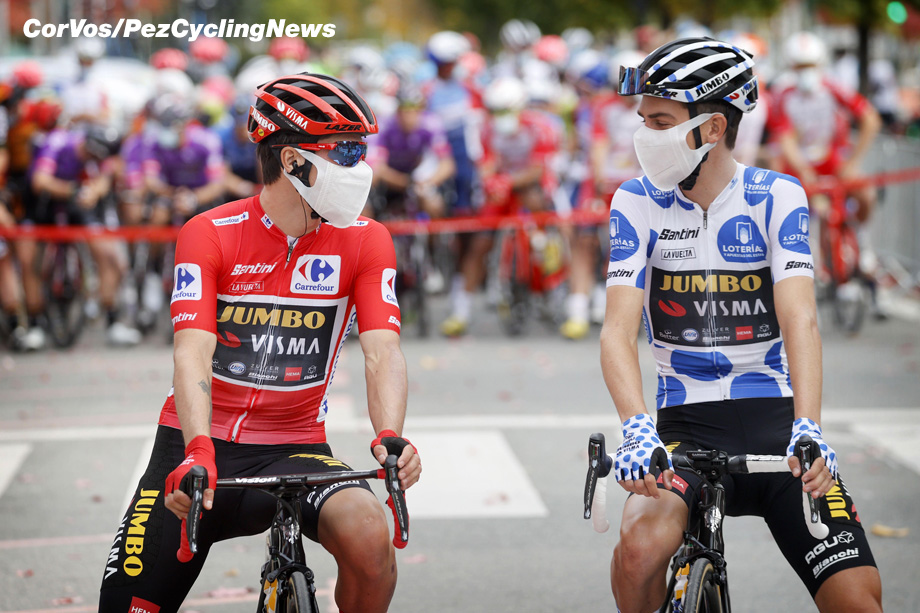 Primoz Roglic and Sepp Kuss at the start

A peloton of 173 went for a ride through the region of Navarra on stage 2. After the start in Pamplona’s picturesque streets, it took a while for the ‘Break of the Day’ to take shape. An early attempt by Pim Ligthart (Total Direct Energie) was soon halted, while a new attempt by six riders also pulled back by the peloton led by Jumbo-Visma. 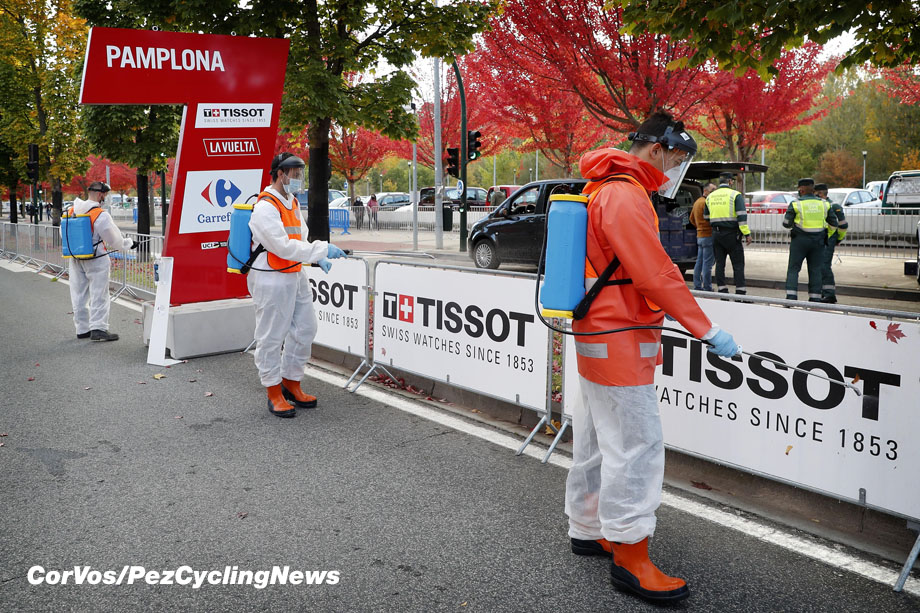 All precautions being taken at la Vuelta 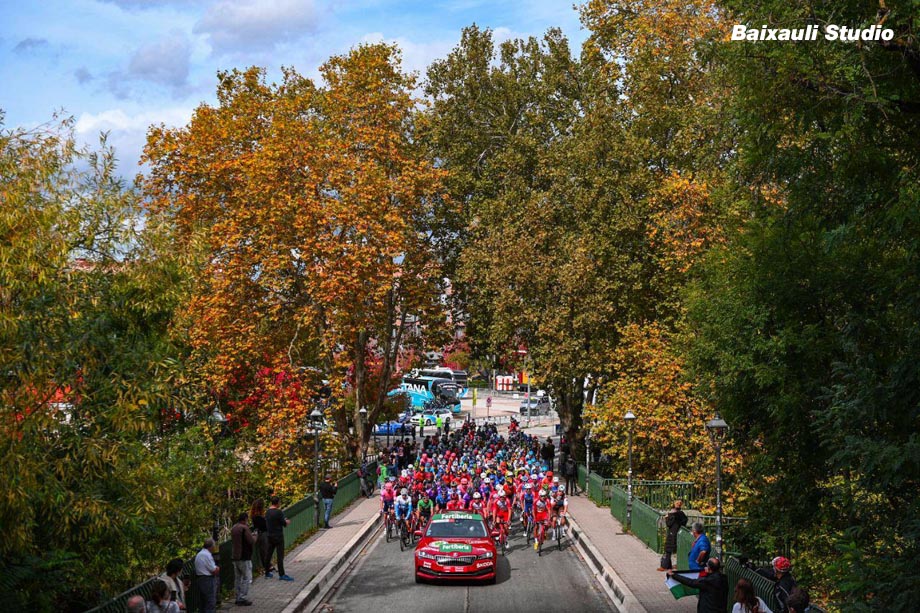 Autumn in the north of Spain 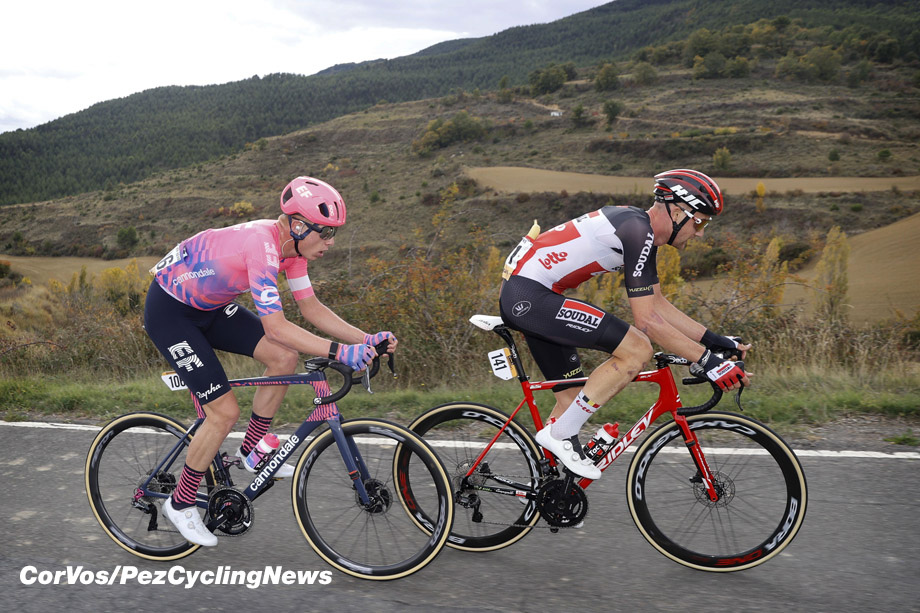 The four leaders started the first climb of the day with a 1 minute lead. Tim Wellens was first on the Alto de Guirguillano. Wellens was the only rider left from the original attack and was joined on the descent by Alex Aranburu (Astana) and the Bruno Armirail and Jonathan Hivert (Total-Direct Energie). Gonzalo Serrano (Caja Rural-Seguros RGA) was also able to join the escape group, which eventually had a 5 minute gap. Led by Jumbo-Visma, the peloton kept the difference within limits. 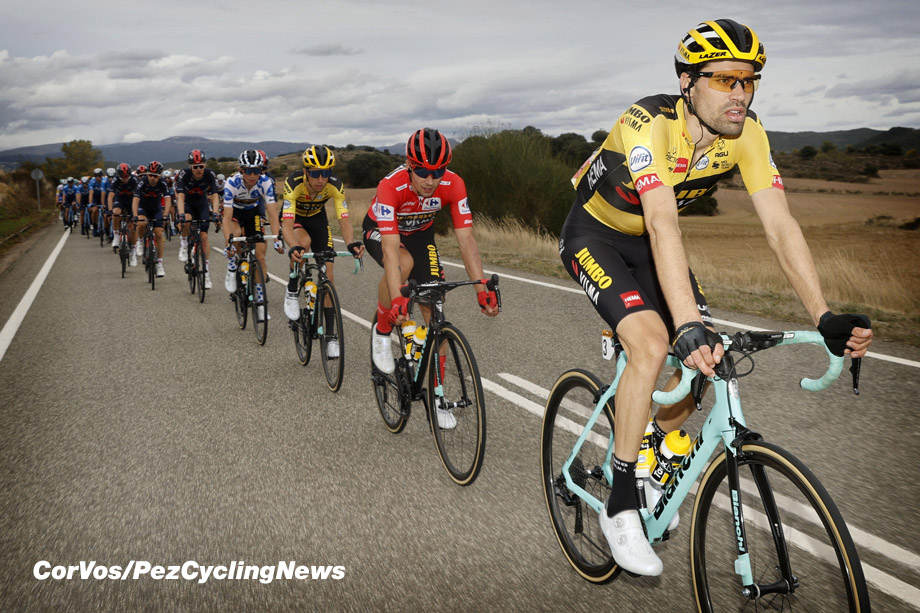 Dumoulin paid for his work later in the stage 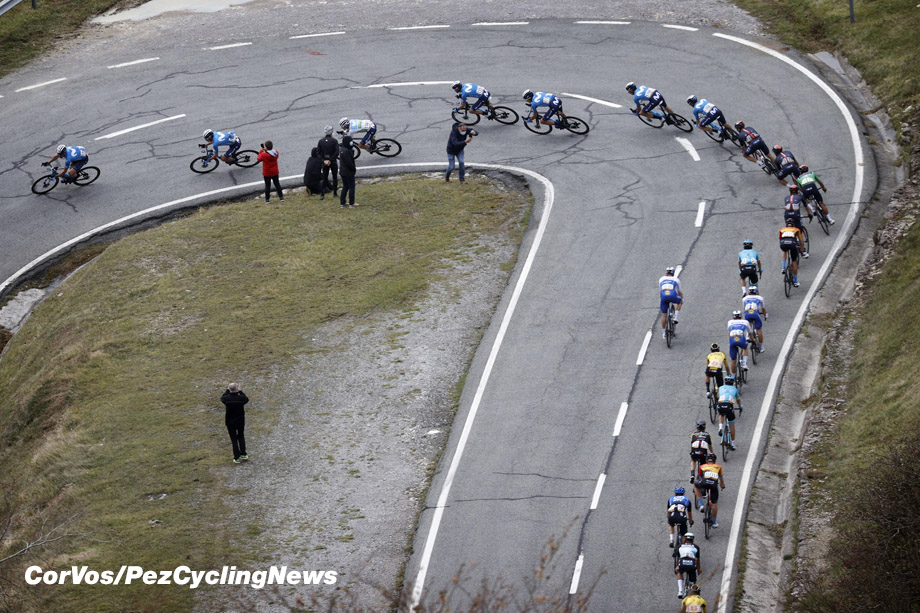 The route was up and down all day

During the ascent of the Puerto de Urbasa, Wellens distanced himself from his fellow escapees. He came over the top first with a lead of 1:30. In the descent Movistar took control of the peloton and the lead of the attackers was quickly pulled back. On his way to the final climb, Wellens was joined by the other escapees, who now had only two minutes left of their lead. Movistar’s blue train rumbled on mercilessly behind.

At 32 kilometres from the finish, Richard Carapaz and Andrey Amador suddenly took off. The caught Aranburu managed to stay with them and the three drove towards Armirail, who was the only escapee still in front. The four started the Alto de San Miguel de Aralar with a small lead. Carapaz attacked, but he was quickly caught by the peloton led by Movistar. Tom Dumoulin was in trouble and had to let go of the front group. 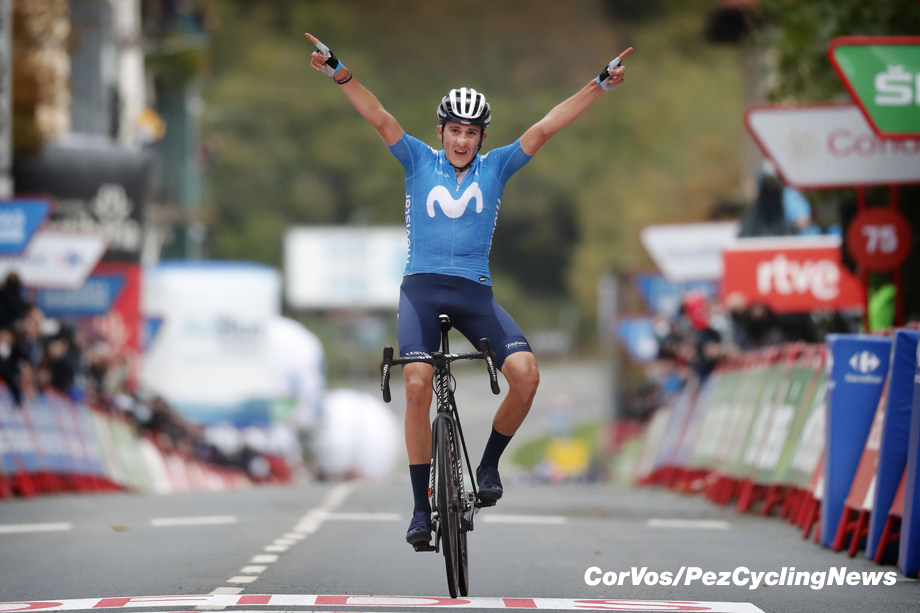 Movistar worked hard for the win

At the head of the race, Luis León Sánchez attacked 6 kilometres from the top. The 36-year-old had 20 seconds, but was caught again at 2.5 kilometres out. In the last kilometre it was Sepp Kuss who put in a hard effort, but Movistar quickly cut him down. Carapaz also tried just before the top, after which a group of eight riders started the descent. 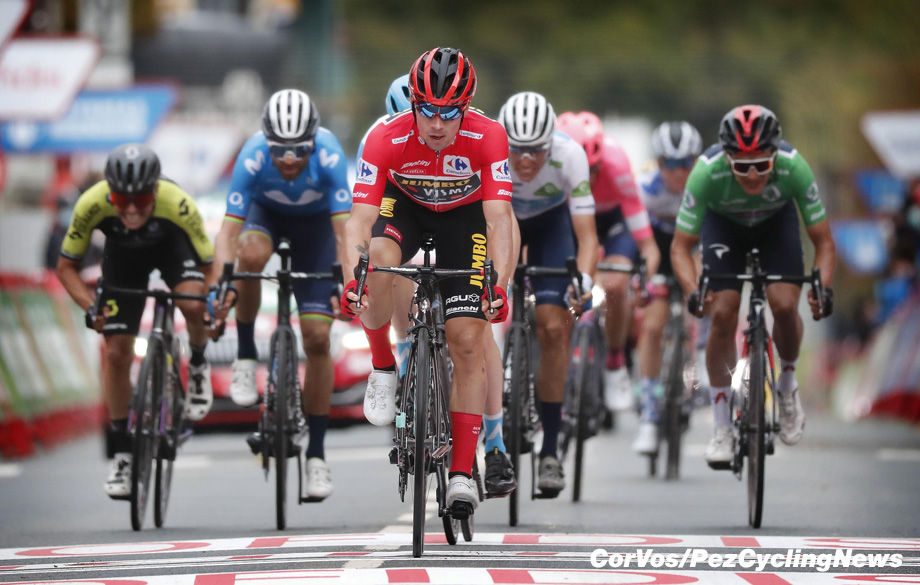 A strong finish for Roglič

Soler jumped out of the leading group and managed to get a lead of 20 seconds. The Catalan managed to stay out of the grip of his pursuers and was able to celebrate his victory in Lekunberri. Roglic won the sprint of the pursuers at 19 seconds to take the bonus seconds. Dan Martin finished third, ahead of Carapaz and Valverde.

# All the news from Spain here at PEZ. #