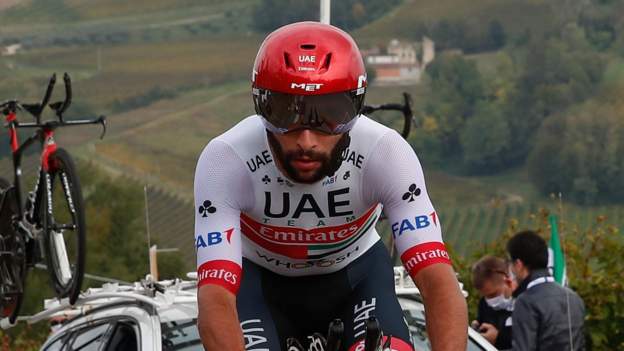 UAE Team Emirates rider Fernando Gaviria has tested positive for coronavirus for a second time this year and is out of the Giro d’Italia.

The Colombian tested positive in the Giro’s latest round of testing, as did a Team AG2R La Mondiale staff member.

Gaviria also tested positive for Covid-19 at the UAE Tour in February.

He is the fourth rider to test positive at the Giro and will not start Tuesday’s 16th stage – therefore ruling him out of the remainder of the race.

His team said he was “immediately isolated” following the test result and is “completely asymptomatic”.

“All other riders and staff returned a negative test, and will undergo further testing today,” a UAE Team Emirates statement added.

“The team’s medical staff are monitoring the situation closely and doing all they can to ensure the we can proceed safely.”

Two teams – Mitchelton-Scott and Jumbo-Visma – have already withdrawn from the three-week race because of positive cases in their camps.

Last week, one team called for it to end a week early, citing a “clearly compromised” coronavirus bubble.

EF Pro Cycling said on Sunday they wanted the race to end to avoid “a chaotic withdrawal on a team-by-team basis”.

The UCI refused their demand, saying race organisers have “committed to implementing the measures to secure the race bubble”.

Giro organisers had breathed a sign of relief last week after the whole peloton and staff retested negative days after three riders and two teams left the race after contracting Covid-19.

While a further two positive tests might not seem too alarming, this is Gavaria’s second positive after he was one of the first riders to get coronavirus back in February – prompting a season shut-down until August.

The Colombian’s form has been poor at a race where he won four stages in 2017. During stage 11, in which Frenchman Araud Demare emulated that feat himself, Gavaria got into position to race and almost immediately sat up on his bike and let his rivals tear away in front of him, displaying an at-the-time perplexing level of lethargy.

The 26-year-old’s UAE-Team Emirates squad – who won the Tour de France in September – must now decide if it’s worth risking staying at the race at all after seeing one of their best athletes test positive for a second time.

After all, they, and all the other World Tour teams, have another Grand Tour to worry about, as the Vuelta a Espana gets under way on Tuesday – so far, say their organisers, under a clean bill of health.