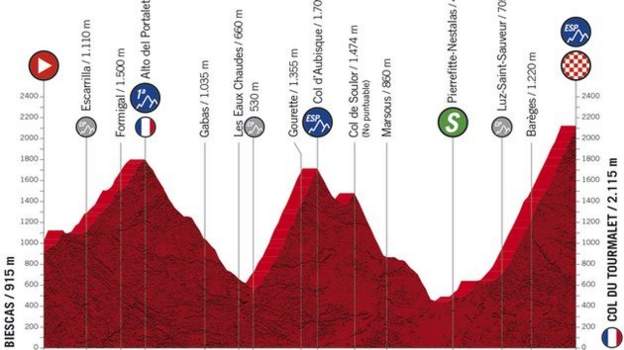 The Vuelta a Espana starts in the Basque region on Tuesday, covering 2,897km (1,800 miles) in 18 stages before it finishes in Madrid on Sunday 8 November.

The race was due to begin on 14 August in the Netherlands, while a trip to Portugal was also been removed because of the coronavirus pandemic.

However, the revamped and rearranged Grand Tour – the last of the season – still boasts a high-quality field on its 75th anniversary.

BBC Sport looks at the riders who could be involved in the battle for the leader’s red jersey and picks out the key stages.

A climbing-heavy Vuelta begins with the summit finish at Arrate, which was the scene of a thrilling battle between Chris Froome, Alberto Contador, Joaquim Rodriguez and Alejandro Valverde on stage three in 2012.

The category one climb to finish kicks up to a 10% gradient in parts and follows three other categorised climbs. While there will be no roadside fans to roar on the favourites near the end, the stage may start to shape the general classification standings.

This punishing mountain stage takes the race above an altitude of 2,000m to one of the most iconic finishes in cycling, atop the Col du Tourmalet in the French Pyrenees.

The day begins with a climb up the category one Col du Portalet before the slopes of two hors categorie climbs – the Col de l’Aubisque and the 19km slog up the Tourmalet – come into view. The weather may also be a factor here, with the Tourmalet – not usually used for racing this late in the year – having being covered in snow in September.

The second weekend of the race begins with another summit finish, this time at La Farrapona. Contador famously accelerated away from Froome here in 2014, on his way to a third Vuelta title.

Arriving after four other categorised climbs, it could provide another defining moment six years on.

Another potentially pivotal day in the general classification, with five categorised climbs on the agenda.

First included in 1999, and now a regular at the Vuelta, the stage concludes on the Alto de l’Angliru.

The 12.4km rise to the summit averages out at a gradient of about 10% before rearing up close to 24% on the Cuena les Cabres (goat path) 3km from the line.

The only individual time trial in this year’s race should favour Jumbo-Visma’s Tom Dumoulin and Primoz Roglic as they seek to take time out of their rivals.

Expect to see riders hop off their time-trial bikes and on to road bikes to combat the short but steep Mirador de Ezaro in the final 2km.

Like the final stage of the Tour de France, the last day at the Vuelta is also a largely processional affair before the final sprint in Madrid.

That means the overall race may be decided on a relentless day featuring five categorised climbs before the hors categorie ascent to the ski station at La Covatilla.

The riders to watch

Chris Froome: As a seven-time Grand Tour-winner, Froome, 35, guarantees attention wherever he races.

However, there are some who believe it is miracle he is even racing, let alone that he has any chance of winning a third Vuelta.

The catalogue of injuries Froome was left with after crashing at the Criterium du Dauphine in 2019 means he has not participated in a Grand Tour since 2018.

Having been omitted from the Ineos Grenadiers team for September’s Tour de France, he comes into the Vuelta searching for fitness and form after failing to finish Liege-Bastogne-Liege and placing 91st overall in Tirreno-Adriatico.

With his departure from Ineos looming, Froome will want to go out with a flourish but is more likely to find himself in the role of back up to team-mate Richard Carapaz.

Primoz Roglic: Former ski jumper Roglic goes into the Vuelta as the defending champion. If his fitness holds, it is difficult to look past the Slovenian retaining his crown.

The 30-year-old is also likely to still be smarting from the extraordinary conclusion to the Tour de France, when he lost the yellow jersey on the penultimate stage.

His recent win at Liege-Bastogne-Liege suggests he is ready for another Grand Tour tilt and he will be buoyed by the climbing power of his Jumbo-Visma team, with Sepp Kuss, Robert Gesink and George Bennett in support.

Tom Dumoulin: Having won the Giro d’Italia in 2017, it is difficult to discount Dutchman Dumoulin, who is a proven Grand Tour winner.

Having been a key domestique for Roglic at the Tour 30-year-old Dumoulin appears to have the capacity to be a major contender, although to do that he will have to show he is stronger than the Slovenian.

The Ecuadorian seemed out of sorts in the early stages of the Tour but rode himself into form in the second half of the race to finish 13th in the general classification and second in the king of the mountains competition.

Carapaz has not finished higher than 18th at the Vuelta but the route and timing of this year’s race could work in his favour.

Enric Mas: In theory, Movistar will have a three-pronged attack at the Vuelta with Alejandro Valverde and Marc Soler also riding.

However, Mas, 25, comes into the race in arguably better form, having finished fifth at the Tour. Tipped to shine by seven-time Grand Tour winner Contador, Spaniard Mas will be looking to build on his second place in 2018.

Thibaut Pinot: After his Tour ambitions fell away following a crash on stage one, France’s Pinot, 30, will hope to be back to his best form and fitness.

Should his ambitions turn away from the general classification towards prestigious stage wins, he will be able to draw confidence from his victory on the Tourmalet in the 2019 Tour.