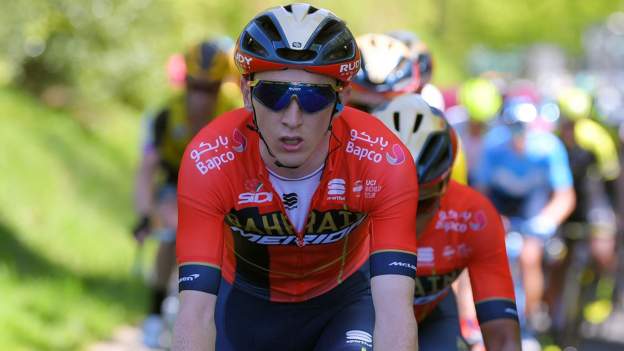 Briton Stephen Williams is “extremely proud” to be set for his first Grand Tour after battling back from injury.

The Welshman, 24, rides in the Vuelta a Espana, starting on Tuesday, after recovering from a knee problem that kept him out for 18 months.

Williams had no return date in mind after having surgery to remove the small fabella bone from his left knee in November 2019.

“It’s been a bit of a tough task to get back to racing,” said Williams.

“So I’m over the moon to be back and at this Grand Tour.”

The Bahrain-McLaren rider was not back on his bike until February 2020, but has recovered well, impressing enough since to earn his chance alongside fellow Welshman Scott Davies in one of cycling’s biggest stage races.

“It’s been a bit of a bumpy road but luckily there was light at the end of the tunnel and I’m grateful to be able to sit here talking to you now,” Williams told BBC Sport Wales.

Before the injury, Williams was a sought-after talent, having produced a number of impressive performances for SEG Racing Academy, including a fifth-place finish at the under-23 version of the Giro d’Italia in 2018.

But the Aberystwyth-born cyclist started to suffer with knee trouble in the winter of that year, shortly after signing for Bahrain McLaren as a new professional.

He struggled with knee pain – competing in just two races in 2019 – and endured months of visits to doctors and physiotherapists in an effort to get a correct diagnosis of the problem.

“I’m really grateful for the patience and support the team has put in me and to be here now is really special,” said Williams.

“When you start any sport as a young person, your dream is to compete at the top and do the biggest events in the world, so it’s an extremely proud moment for me and my family.

“I’m excited to be here at one of the three Grand Tours and it makes it even more special with how the last year has gone.

“It’s a little bit of an unknown for me because it’s the longest race I will have done, but fingers crossed it all goes smoothly and I’m just looking forward to it now.”

He will ride in support of Wout Poels and will have a very familiar face in Davies in his team.

“It’s really special to have Scott here as he’s been a good friend of mine for a while now,” added Williams.

“With the both of us being Welsh, getting the chance to put Wales on the map is extra special.”

It will be Davies’ second Grand Tour after competing in the 2019 Giro d’Italia for Dimension Data.

Davies, 25 signed with Rod Ellingworth’s squad last autumn, and having learned his trade at World Tour level, is hoping to make a mark at the top end of the sport after his own injury problems.

“For both Stevie and myself, it’s not been the easiest of years having both had our own issues,” Davies said.

“But we’re both here now and looking forward to it. It’s going to be a learning curve for us both, but we’ll try to enjoy it as much as we can.”

The 75th edition of the race has been reduced from 21 to 18 stages because of the impact of Covid-19. It starts in Irun on Tuesday and finishes in Madrid on 8 November.