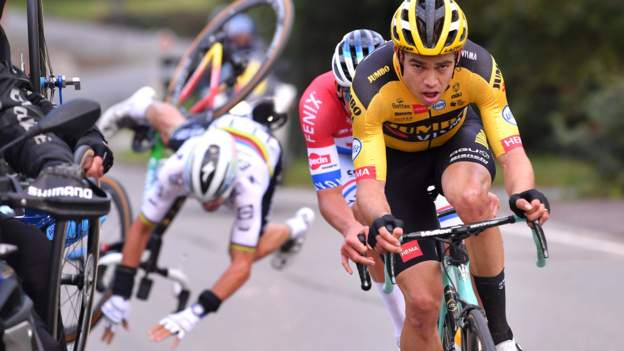 World champion Julian Alaphilippe crashed out after hitting a motorbike as Dutch rider Mathieu van der Poel won at the Tour of Flanders.

Alaphilippe, 28, was part of what would become the winning breakaway, when he hit a race motorbike 35km from the finish of the 243km one-day epic.

That left Van der Poel, 25, and Belgium’s Wout van Aert, 26, to battle it out at the finish in Oudenaarde.

And Van der Poel edged it on the line, with Alexander Kristoff coming third.

The pair started their sprint at the same time and Alpecin-Fenix rider Van der Poel just managed to hold off his Jumbo Visma rival Van Aert.

It is his first win in one of cycling’s Monuments – the five most prestigious one-day races – and comes 34 years after his father Adri won the race.

It also ended Van Aert’s hopes of becoming the first rider to win the Tour of Flanders and Milan-San Remo in the same year since Eddy Merckx in 1975.

However, it was a sad conclusion to the season for world champion Alaphilippe, who also held the yellow jersey for 14 stages at the 2019 Tour de France.

The French rider, who had illuminated the race with several attacks, split the peloton on the punchy Koppenberg climb but flew over his handlebars after his right elbow clipped the back of a race motorbike.

Van der Poel, who was just in front of the Deceuninck-Quick-Step rider, narrowly avoided the bike on the right-hand side of the road.

Alaphilippe was in considerable pain as he lay on the road before eventually sitting up to be treated by race paramedics.

Deceuninck-Quick-Step later confirmed Alaphilippe had broken two bones in his right hand and will have an operation on Monday.

In the women’s race, former world champion Chantal van den Broek-Blaak broke clear inside the final 20km of the race to solo to victory.

The 30-year-old Dutch rider timed her effort to perfection to ride away from a high-quality group at the front of the race, containing the likes of Annemiek van Vleuten, Anna van der Breggen and Elisa Longo Borghini.

Britain’s Lizzie Deignan dropped out of contention before the the penultimate climb of the day up the Oude Kwaremont and did not finish the 136km course.