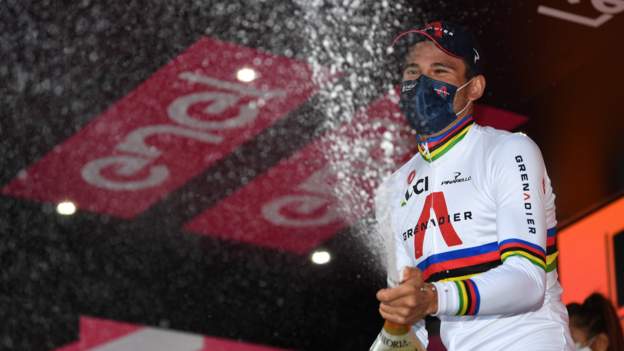 McNulty’s effort on the 34.1km time trial from Conegliano to Valdobbiadene saw him climb to fourth overall.

But it was also a good day for Almeida, who now leads by 56 seconds from Wilco Kelderman.

The 22-year-old, who started the day 40 seconds ahead of the Dutch rider, gained ground on all of his general classification rivals bar McNulty.

Spain’s Pello Bilbao and two-time Giro winner Vincenzo Nibali are now both over two minutes adrift of the maglia rosa as the race heads towards a demanding final week in the mountains.

“It was a good day,” said Almeida. “I did a good time trial and now I have a few seconds more on Wilco Kelderman. I hope to continue like this, I feel good.”

While Ineos Grenadiers were dealt a blow by Geraint Thomas’ injury and subsequent withdrawal after stage three, they have now won four stages so far.

And with Ganna in such dominant form against the clock they will be favourites to add at least one more in the concluding time trial in Milan.

“This is my third victory in the Giro, I am very proud of it,” Ganna said.

“This year I have improved a lot thanks to the help of my team. Every little improvement is important and contributes to performances such as this one.”

Earlier on Saturday, cycling’s governing body, the UCI, confirmed that there had been no new reported cases of Covid-19 at the race after 512 tests were conducted on Thursday and Friday.

The tests, which went beyond the original protocols for the race, were conducted after EF Pro Cycling – winners of two of the 14 stages so far – wrote to race organisers asking for the race to end this Sunday.

On Tuesday, Mitchelton-Scott and Jumbo-Visma both withdrew from the tour following positive tests in their camps. Another round of testing is due to take place on Monday’s second rest day.