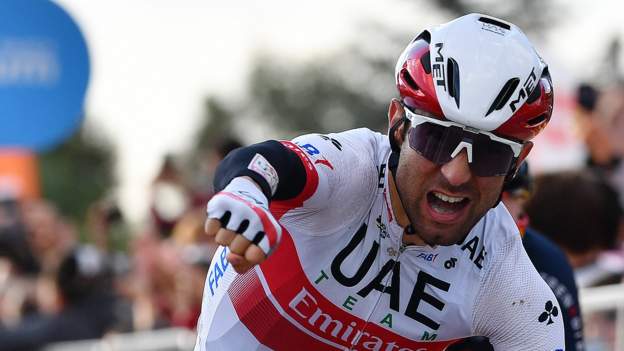 Italy’s Diego Ulissi claimed his second victory at the 2020 Giro d’Italia in a sprint finish on stage 13.

Ulissi, 31, edged out Portugal’s Joao Almeida, who extended his overall race lead after collecting six bonus seconds on the line.

Austria’s Patrick Konrad was third, with Britain’s Tao Geoghegan Hart finishing fourth on the 192km route from Cervia to Monselice.

Saturday’s 14th stage is a 34.1km time trial from Conegliano to Valdobbiadene.

Almeida, 22, who is racing in his first Grand Tour, now leads the race by 40 seconds from Sunweb’s Dutch rider Wilco Kelderman, with Spain’s Pello Bilbao a further nine seconds adrift.

“I am a bit disappointed with my second place, I wanted a stage win. I was really close but not close enough,” Almeida said.

“The goal was the stage win, the seconds is just a bonus. After the descent, the group was quite small. I saw three guys [team-mates] with me and I know I can be fast in small groups, so we tried. The team really deserve to have won but Ulissi was fastest.”

A largely sedate day of racing sparked into life in the final 40km, as a seven-man breakaway was reeled in and two categorised climbs in quick succession splintered the peloton.

Arnaud Demare, who has won four stages in this year’s race, was initially dropped on the Roccolo climb and although he fought his way back, was decisively dropped on the final climb, the Calaone.

Triple world champion Peter Sagan missed an opportunity to leapfrog the Frenchman in the points classification after falling back on the Calaone.

And with Deceuninck-Quick-Step’s James Knox and Fausto Masnada helping to maintain a high speed towards the line, Almeida finished half a wheel behind Ulissi in the sprint finish.