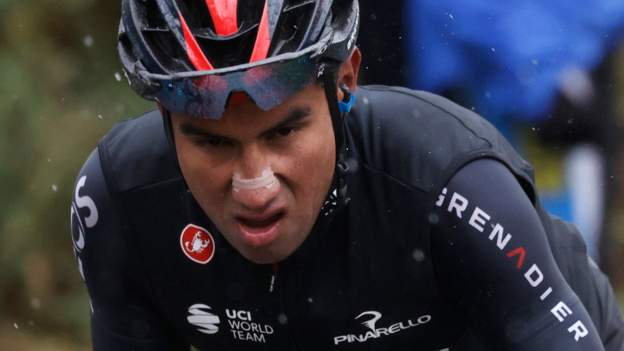 The Ecuadorian, 23, was the best of a breakaway group ahead of the peloton, in which Joao Almeida retained the leader’s pink jersey.

Rain fell across most of the 170km stage, which started and finished in Cesenatico, causing several punctures.

Mark Padun chased Narvaez until about 22km to go when the Ukraine needed to change his bike.

Friday’s 192km stage is a sprinter’s run from Cervia to Monselice.

Narvaez’s was a sweet victory for British team Ineos, who have lost their lead riders in both Grand Tours this season, Egan Bernal midway through the Tour de France and Geraint Thomas early in the Giro with a fractured pelvis.

The team have focused on stage wins since, taking two through powerhouse time-trial specialist Filippo Ganna and now Narvaez.

The whole field was split into several groups as the stage dragged on through several long category three and four climbs around the hills of Emilia Romagna – where famous Italian Tour de France and Giro champion Marco Pantani grew up.

But most of the main contenders who remain in this race of attrition did not lose significant time, including Sunweb’s Wilco Kelderman, only 34 seconds down, and Trek-Segafredo’s Vincenzo Nibali at one minute one second.

Pre-race favourites Thomas, Simon Yates of Michelton-Scott and Steven Kruijswijk of Jumbo-Visma have all abandoned.

Yates and Kruijswijk quit after contracting the coronavirus, prompting their teams to withdraw from the race, leading to questions over whether the Giro should continue to its conclusion in Milan on 25 October.