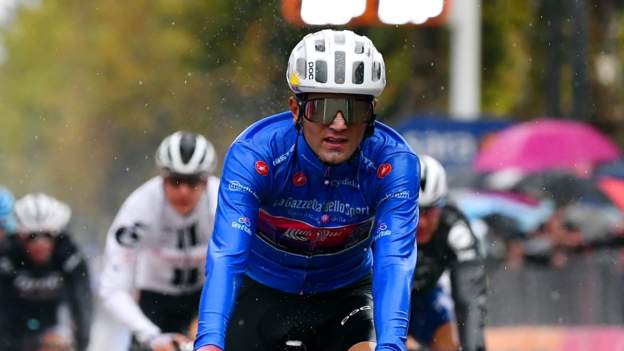 EF Pro Cycling – winners of two of the 12 stages so far – wrote to race organisers asking for the race to end this Sunday.

However, cycling’s governing body, the UCI rejected, the request.

On Tuesday, the Mitchelton-Scott and Jumbo-Visma teams withdrew from the tour following positive tests in their camps.

“With a clearly compromised bubble,” EF’s letter said, “and an expected lag between exposure and symptoms/positives, it must be expected that further illness will result.”

Mitchelton-Scott had already lost their team leader Simon Yates on Saturday after he tested positive for the virus.

EF said it wanted to avoid “a chaotic withdrawal on a team-by-team basis”, instead ending the race in a “systematic, holistic way”.

The UCI refused their demand, saying race organisers have “committed to implementing the measures to secure the race bubble”.

The race is due to finish in Milan on 25 October but Belgian rider Thomas De Gendt told broadcaster Sporza before stage 12 on Thursday that he did not “feel like riding” because of coronavirus fears.

The Lotto-Soudal rider said. “The situation is headed in the wrong direction and it seems that the organisers are hiding things. The riders are discussing whether we should start the stage.”

His comments came after reports that 17 police officers on the race had tested positive, though a police statement distributed by organisers said the individuals concerned had been working on the Giro-E, a support race.

Stage 12 went ahead as planned and was won by Ineos Grenadiers’ Jhonatan Narvaez.