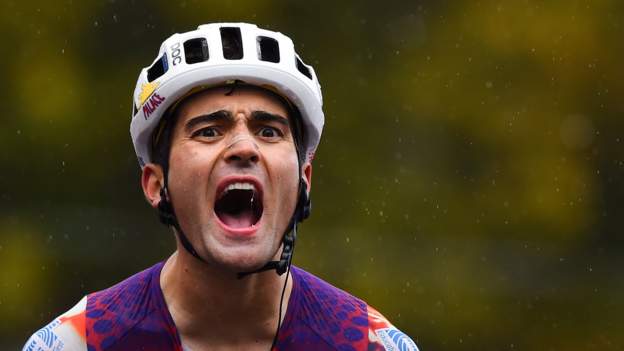 At first glance it would be easy to think cycling is in something of a health crisis at the moment.

If riders aren’t having to abandon the Giro d’Italia because of errant drinks bottles rolling under the wheels of the likes of Ineos Grenadiers’ Geraint Thomas – leading to a broken pelvis – then they are catching the coronavirus, which put paid to the hopes of the other top British rider, Simon Yates of Mitchelton-Scott.

The departure of the two pre-race favourites has put a completely different complexion on a race, which, if it survives the Covid-19 test for all staff and riders on Monday’s first rest day, is shaping up to be a thrilling event.

In fact, if it’s unpredictability in sport that turns you on, cycling’s where it’s at.

As a precursor to what unfolded at the first week of the Giro, the Tour de France produced its most dramatic finish since the early nineties, the power and energy of the hot favourite, Jumbo-Visma’s Primoz Roglic, drained away in front of our eyes on the decisive stage – just as it had done to the other hot favourite, Egan Bernal of Ineos, a week prior.

Now, it’s the tour of Italy’s turn to surprise – even before the race reaches its likely snow and ice-covered final sortie through the Italian Alps.

Across the weekend, two real underdog victories reflected what appears to be a new trend in cycling.

First, on Sunday, as Deceuninck-Quick Step protected their surprise pink jersey-wearing leader Joao Almeida in the peloton, another unfancied Portuguese Ruben Guerreiro was left to fight out the victory on the climb up to a rain-soaked Roccaraso against the might of Jonathan Castroviejo of top-budget team Ineos Grenadiers.

It had been a valiant effort across 207km, which everyone expected to end with Castroviejo powering past the 26-year-old. But instead he pulled away to win for his EF Pro Cycling team.

Guerreiro’s impassioned call as he crossed the line illustrated how much it mattered. And it was a second stage win for a team of which little was expected at this race – other than perhaps some attention for the outrageous, specially designed jerseys the team brought to this Giro.

“Caicedo was on the radar of many teams – he’s a guy we picked up and developed after he had been overlooked and underestimated. He’s not a superstar, but when a guy like that wins you get a double pleasure because it’s an underdog victory.”

The American team, founded on the idea of “the upset victory and doing it in a fun, honourable and honest way that’s not win-at-all-costs” might win more friends than stages. But they do it on a budget that is in the “bottom third” of what the World Tour Teams spend each year.

“Hopefully we’re moving into an era where cycling is less predictable,” adds Vaughters, 47. “We’ve gone through 20 years of one team winning and hopefully we’re going to be part of the next decade of unpredictability.”

Proof, if it was needed, that the sport requires a lot of money just for a team to get involved comes in the form of the other ‘underdogs’, who won on Saturday.

“History was made today,” said billionaire team-owner Sylvan Adams. “This demonstrates that our project has significance beyond sport, showing the true heart of Israel. I could not be more proud.”

Adams set up the team to promote Israel, to help those who, as he puts it, “might have a slightly negative thing to say about the country”. But it’s more than a vehicle for business and diplomacy – it’s a passion for a veteran of a couple of hundred races himself.

“During the Tour de France, every single day for two and half weeks, we drove to a certain point on the stages ahead of the peloton – about half way – and finished the stage. There were people sitting out there who have nothing to do all day other than drink beer – so they cheered for us,” he said.

Adams, 61, described the team’s inability to win a stage at the team’s very first Tour de France as “sub-optimal”. But this is a team who will have four-time Tour winner Chris Froome on its books next season. The ambition – and the money – is there.

But for a healthy sport Vaughters insists: “There has to be some legislation in the rule book. Some sort of financial fairness or budgetary cap. You can’t have one team running on £40m and another on £10m and expect results to be equitable.

“That issue will have to be talked about if you want the racing to continue to be as exciting as it has been this year.”