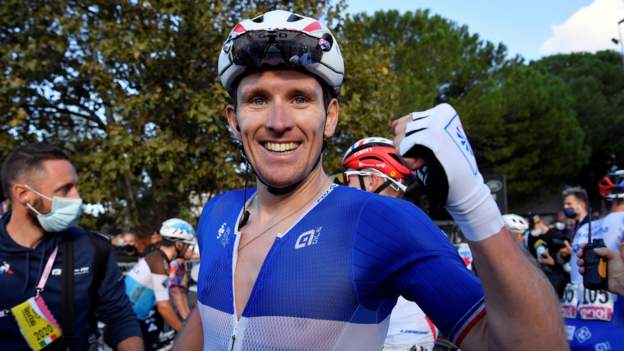 Arnaud Demare won stage six of the Giro d’Italia in a sprint finish for his second victory of the 2020 race.

French Groupama-FDJ rider Demare powered away from Team Sunweb’s Michael Matthews and Astana’s Fabio Felline to win in Matera at the end of the 188km ride from Castrovillari.

But the Mitchelton-Scott rider, who lost time on stage three, could narrow that gap, with plenty of climbing in the Italian Alps to come.

Demare, who also won stage four, was one of a reduced bunch after a short but steep climb near the finish.

Peter Sagan found himself boxed in and when Demare kicked, the 29-year-old rapidly gapped Matthews and Felline to win comfortably on the uphill finish.

“This is absolutely amazing,” he said. “It was a really strong climb, really steep, I lost a few positions but I didn’t go too crazy.

“I managed to get back up, I was in the wheel of the Astana guy, and I just kept following.

“I can’t believe I got there at the finish – that was really hard. This morning, I didn’t know if there was going to be even a chance for a sprint. It’s amazing.”

Maglia rosa holder Almeida, who remains 43 seconds ahead of Bahrain-McLaren’s Pello Bilbao in the overall standings, was forced to temporarily stop with 37km to after issues with his radio.

While standing at the side of the road he was then hit by another rider and was knocked to the ground, but was able to remount and appeared to finish the stage without difficulty.

Four riders had earlier formed a breakaway, opening up a 10-minute gap on the peloton, before being caught with about 14km remaining.

Friday’s seventh stage is a 143km route from Matera to Brindisi.