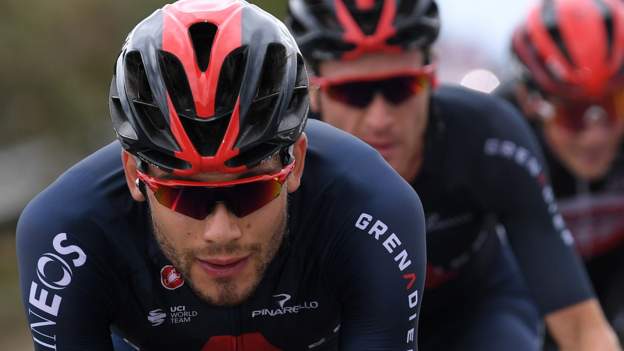 World road time trial champion Ganna spent the whole 225km stage in the breakaway, going clear up the category one climb of the ‘dark mountain’.

Yates, a favourite for the overall win, remains in touch despite a poor stage three costing him time.

Thursday’s sixth stage is a 188-km route from Castrovillari to Matera in the Basilicata region.

A surprise win for a popular figure

Ganna, 24, also won the time trial on the Giro opening stage into Palermo and only lost the pink jersey after trying to nurse the injured Geraint Thomas up Mount Etna on stage three.

The Italian surprised the peloton by staying out at the front of the race across the huge 225km stage from Mileto to Camigliatello Silano – the first on mainland Italy after the race began on Sicily.

Valico di Montescuro – known as the ‘dark mountain’ – is a 19km climb shrouded in pine trees and on Wednesday greeted the riders with thick fog.

As others in the break faded the peloton increased the pace up the mountain, in particular the Trek-Segafredo team of two-time winner Vincenzo Nibali, who aggressively tried to hunt down Ganna while putting pressure on the pink jersey and other general classification contenders.

One Trek-Segafredo rider who had to abandon the race was Dutchman Pieter Weening with suspected concussion.

He struck a discarded drinks bottle on Tuesday’s stage four – just as Thomas had on Monday leading to his abandonment – and, as he tried to save the bike, hit his head on the road.

After being assessed, Weening was allowed to continue but decided to abandon a day later.

The incident fuels questions about how the sport deals with head injuries and potential concussions, following Romain Bardet being allowed to finish stage 13 of the Tour de France despite suffering a bleed on the brain after a crash.

Are the Brits still in with a chance?

Yates, is now three minutes 56 seconds down in the general classification after losing most of his time on Monday’s stage to Mount Etna.

Given there are more than two weeks remaining of an already unpredictable race, it is possible Yates, 28, can get time back on his main rivals – most of whom are around two and a half minutes ahead – with superior climbing skills in the Italian Alps.

Steven Kruijswijk of Jumbo-Visma, Astana’s Jakob Fuglsang, and Bora-Hansgrohe’s Rafal Majka join Nibali as the frontrunners expected to take over at the front as the race progresses.

Other British riders in contention are Ineos’ Tao Geoghegan Hart and James Knox of Deceuninck-Quick Step, but the young pair are likely to have less protection from their teams than Yates as they seek single stage wins.