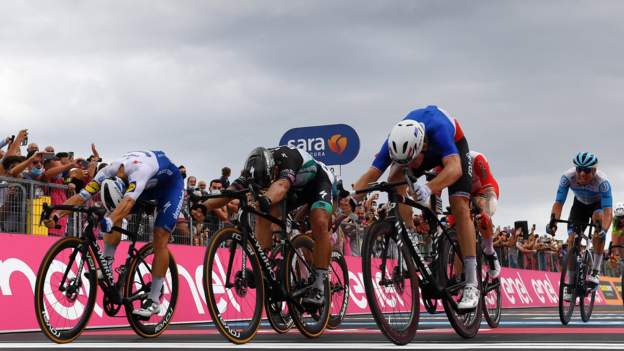 Organisers have cast doubt over the cause of Tuesday’s Giro d’Italia crash in which Luca Wackermann was injured.

The Italian’s team, Vini Zabu-KTM, posted a picture of the rider in hospital, where he was kept overnight after suffering multiple injuries.

Team boss Andrea Citracca claimed a helicopter “flying too low” caused the roadside barriers riders crashed into near the end of stage four to move.

But a source told BBC Sport an “external factor” may have moved them.

Wackermann will have further scans on a suspected fracture of the back.

He and team-mate Etienne van Empel both fell in the incident – in which both riders collided with the roadside barriers as the race travelled from Catania to Villafranca Tirrena – though the Dutchman was able to get back up.

Vini Zabu-KTM later confirmed Wackermann had abandoned the race with a broken nose and has a suspected broken back, along with multiple cuts and bruises.

“The helicopter was flying too low, the movement of the air blew up the barriers. It is not clear if he has broken his pelvis. The barriers were not tied properly,” Citracca told Italian TV station RAI2 on Tuesday.

However, a source told BBC Sport on Wednesday: “The barriers were well tied together and in that moment the TV helicopter was flying over the finish.”

The source said there was little or no wind at the moment that could have caused the barriers to move and that “an external factor could have moved” them.

Having spoken to Wackermann, the Professional Cyclists’ Association (CPA) have said it will request an investigation into what happened with world cycling’s governing body the UCI.