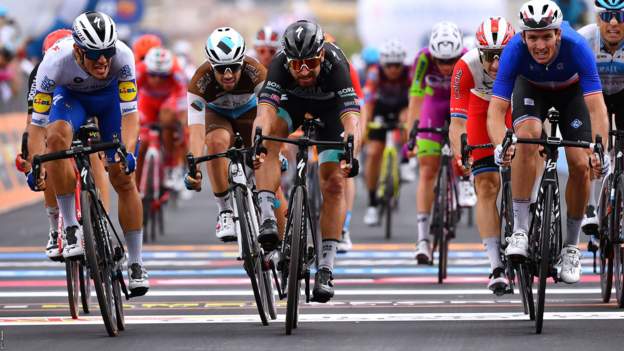 Italy’s Luca Wackermann was taken to hospital after a helicopter “flying too low” caused a crash near the end of stage four of the Giro d’Italia.

Vini Zabu-KTM’s Wackermann and Etienne van Empel both fell in the incident.

Dutch rider Van Empel was able to get back up but his team-mate was less fortunate.

“The helicopter was flying too low, the movement of the air blew up the barriers. It is not clear if he has broken his pelvis. The barriers were not tied properly.”

Vini Zabu-KTM later confirmed that Wackermann had abandoned the race with a broken nose and has a suspected broken back, along with multiple cuts and bruises.

The crash saw both riders collide with the roadside barriers and took place in the final 800m of the stage as the race travelled from Catania to Villafranca Tirrena.

France’s Arnaud Demare of Groupama-FDJ claimed victory in the bunch sprint on the race’s final day on the island of Sicily.

He beat Bora-Hangrohe’s Peter Sagan and Davide Ballerini of Deceuninck-Quick Step by millimetres on the line after organisers poured over a photo finish.

One of the surprise omissions from the bunch sprint was Fernando Gaviria of UAE-Team Emirates, who lost touch with the peloton as teams picked up the pace at the front.

One of the main contenders – Vincenzo Nibali – saw a member of his Trek-Segafredo team suffer a worrying fall with 86km to go.

Dutchman Pieter Weening struck a discarded drinks bottle – just as Great Britain’s Geraint Thomas had on Monday leading to his abandonment – and, as he tried to save the bike, struck his head on the tarmac.

After being assessed he was allowed to mount his bike and continue despite looking confused and trying to put his foot on his pedal, which was nowhere near him.

The incident fuels questions about how the sport deals with head injuries and potential concussions, following Romain Bardet being allowed to finish stage 13 of the Tour de France despite suffering a bleed on the brain after a crash.

What now for Yates?

Following Thomas’ abandonment, Britain’s other big favourite for the Giro, Simon Yates, is now three minutes 48 seconds down in the general classification after also losing time on rivals on Monday’s stage to Mount Etna.

Given there are more than two weeks remaining of an already unpredictable race, it is possible Yates, 28, can get time back on his main rivals – most of whom are around two and a half minutes ahead – with superior climbing skills in the high mountains.

Steven Kruijswijk of Jumbo-Visma, Astana’s Jakob Fuglsang, and Bora-Hansgrohe’s Rafal Majka join Nibali as frontrunners, but it is Joao Almeida of Deceuninck-Quick Step who retains the pink jersey for Wednesday’s huge 225km stage five from Mileto to Camigliatello Silano.