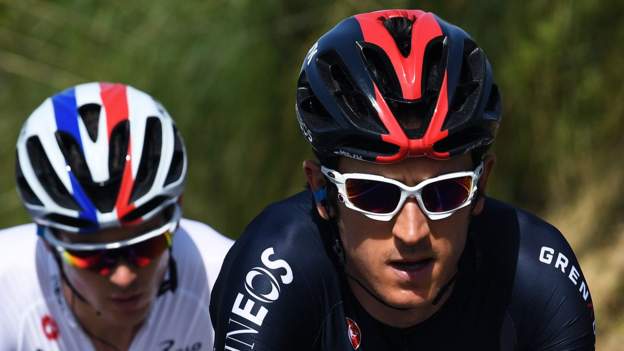 Britain’s Geraint Thomas is out of contention for the Giro d’Italia after losing more than 12 minutes on stage three to Mount Etna.

The Ineos Grenadiers rider, 34, crashed just before the start and began to lose contact with the peloton about 25km from the end of the stage.

The stage was won by EF Pro Cycling’s Jonathan Caicedo.

What happened to Thomas and Yates?

Thomas and Yates were the two strongest contenders to win this year’s Giro, which promised to be a battle of two riders coming into form.

Instead, it was a miserable day for both as the rain fell in the dramatic surrounds of Etna’s dried black lava flows.

Thomas fell during the neutralised zone before the start of the mountainous stage up to Sicily’s volcano.

He appeared to be riding comfortably despite badly torn kit and reports of landing on his hip.

But as the stage wore on Thomas slipped back from the peloton as rival teams picked up the pace.

Ineos even sacrificed the leader’s pink jersey, taking race leader Filippo Ganna back to try to to help Thomas recover.

Thomas was third in the general classification before the stage, 26 seconds ahead of Yates in eighth.

Soon after Thomas’ demise Yates began to fade in a similar way, slipping back from a rapid peloton.

With 18 days of racing remaining, Thomas is now 11 minutes and 17 seconds down in the general classification, while Yates has a deficit of 3mins 46secs.