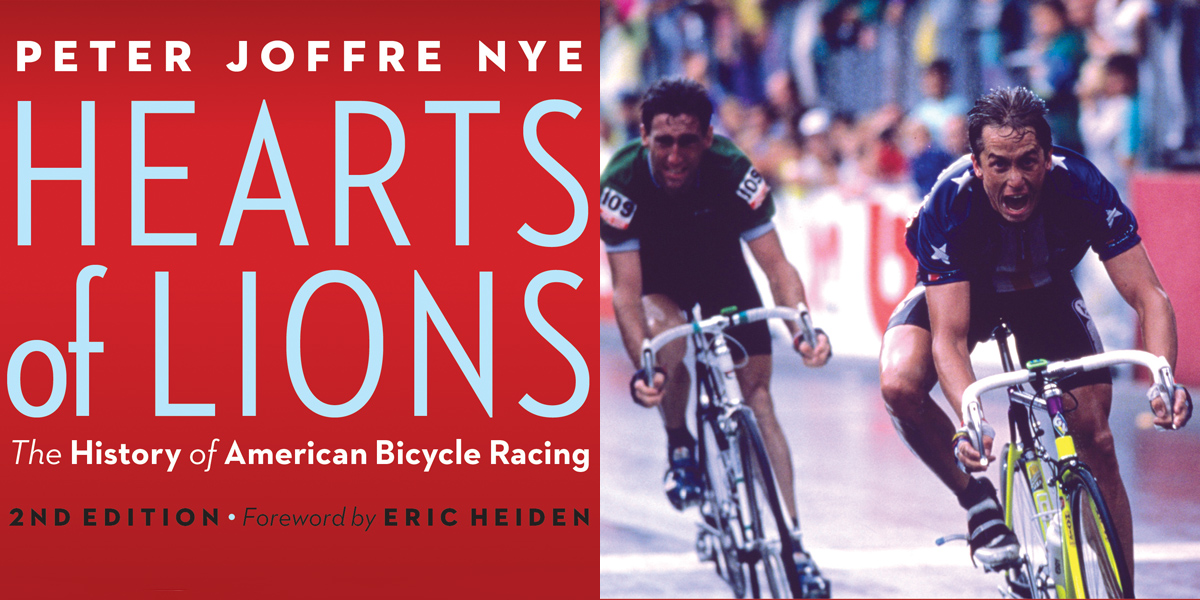 “Hearts of Lions,” a history of American bicycle racing, was originally released in 1989 and told the story of the ups and downs of the sport until the triumphant moment when Greg LeMond won the Tour de France for the first time in 1986. Now an expanded edition has been released that catches up with the three decades since, taking us up to the 2016 Olympic Games in Rio de Janeiro, and remains the most comprehensive account of the American bike racing experience in print. 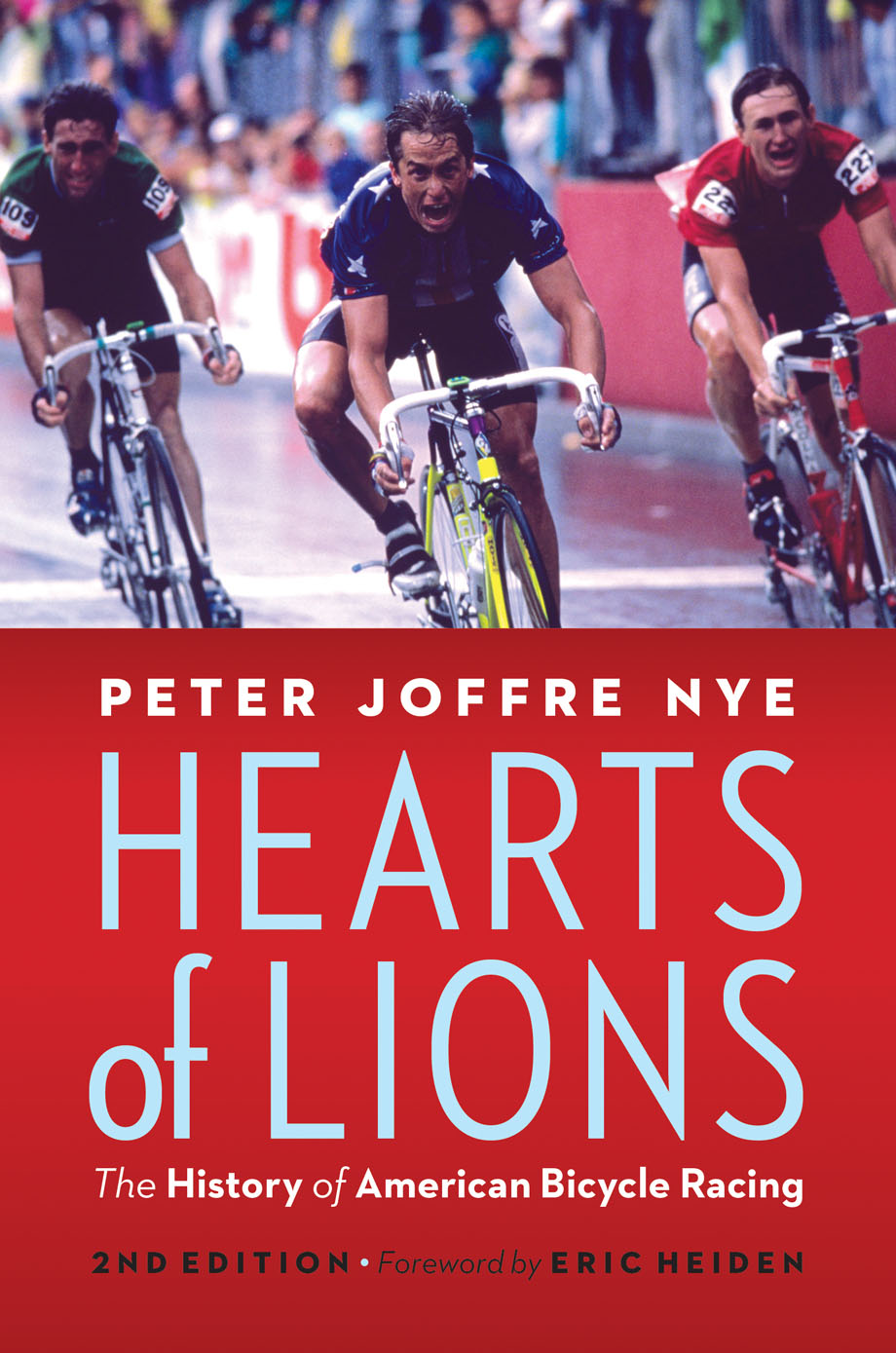 Author Peter Joffre Nye is an accomplished teller of tales and his excellent biography of Albert Champion, Paris-Roubaix winner and spark plug magnate, has been reviewed here. He has also contributed to the wonderful 2007 DVD and book about the Six Day Races, and, ahem, wrote “The Lance Armstrong Performance Program”, published the year before and now pretty much ignored. 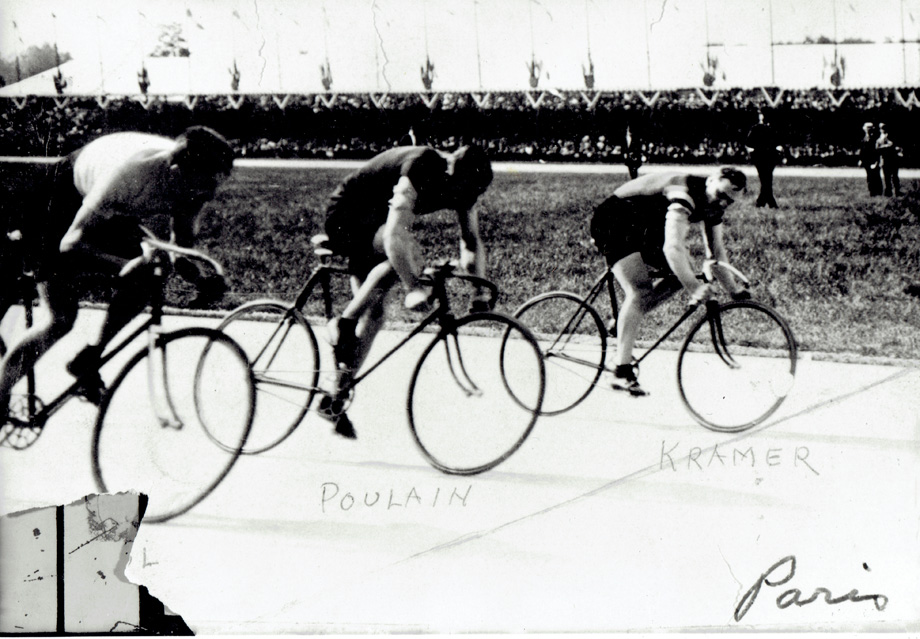 The early days of racing in America remain the strength of the new edition and Peter Nye tells a rollicking tale of impressive athletic accomplishment, larger-than-life promoters and popular entertainment so novel it is hard to imagine its impact today. Racing cyclists drew huge crowds to wooden tracks throughout the country and earned more than in any other sport. Baseball and boxing were the only real competition. Football was a college pastime and in 1920 you could buy a franchise in what was to become the National Football League for $100—or the entire league for $1,100, something a good pro bike racer could easily earn in a week. When Alf Goullet, a pro racer about to retire was considering buying the New York Giants, Six Day Race promoter John Chapman told him that football was for college boys and high school kids and nobody would ever pay to watch professional football. 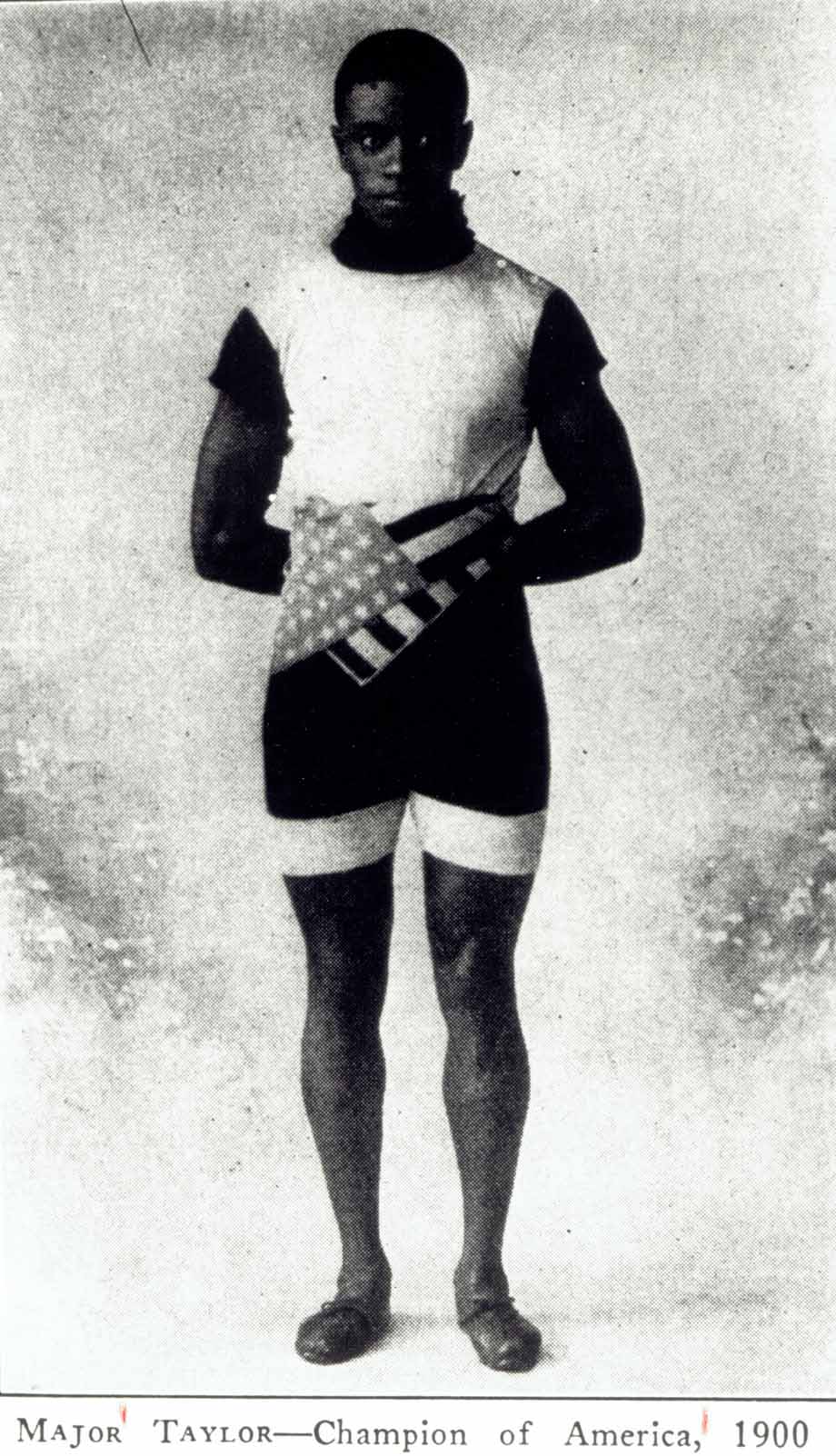 “Hearts of Lions” is a valuable historical document as Peter Nye was able to interview a number of those who had participated in the Jazz Age racing era, when top riders came from around the world to race in the USA for serious money. There are highly entertaining stories here about people like Major Taylor, Frank Kramer, Arthur Zimmerman, Floyd MacFarland, the three generations of racing Walthours, and Tex Rickard, the promoter of all promoters. Many of the riders would go to Europe to challenge the best there with great success as well. But professional track racing as wildly popular entertainment faded away as the Great Depression bit and radio was available to provide cost-free diversion. The tracks were torn down and the riders went from being household names to pretty much entirely forgotten. The Six Day Races, an American invention in the two-man team format, continued to live on in Europe but are much reduced in number and importance today. Most Americans equated the bicycle with children’s toys, a tarring it has yet to fully escape. 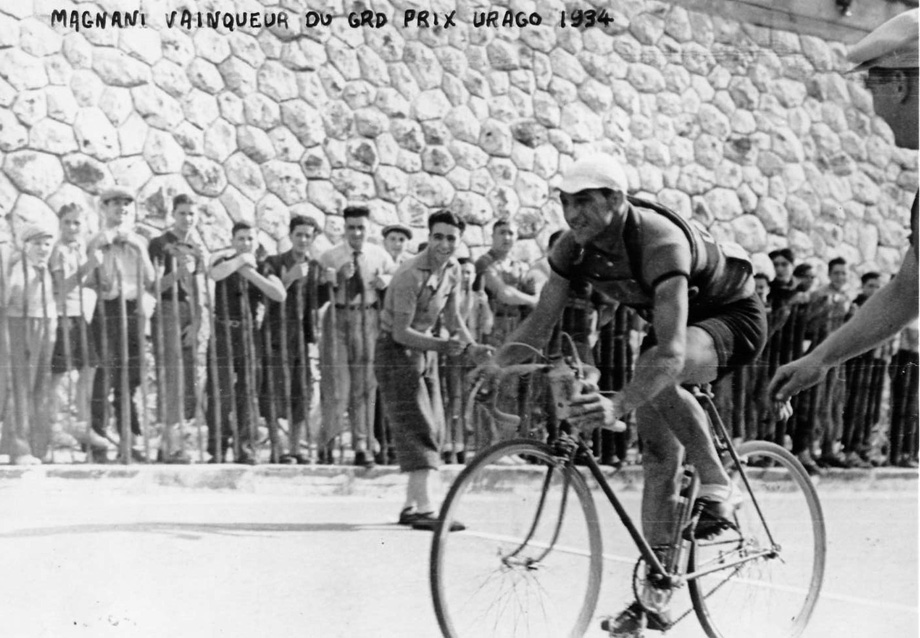 The author also was able to dig out the story of the hitherto-unknown first American pro to ride in European road races. Joseph Magnani, born in Illinois, rode with French and Italian teams from 1935 until 1948, competing in major races including the Giro, Milan-San Remo, the Tour of Switzerland and the 1948 World Championships in Reims, where he came last (but seventh!). His victory in the 1935 Marseille-Nice race was the first by an American professional in a road race in Europe. Magnani returned to the United States and eventually came to build pro-level quality frames for Schwinn, the fabled Paramounts. 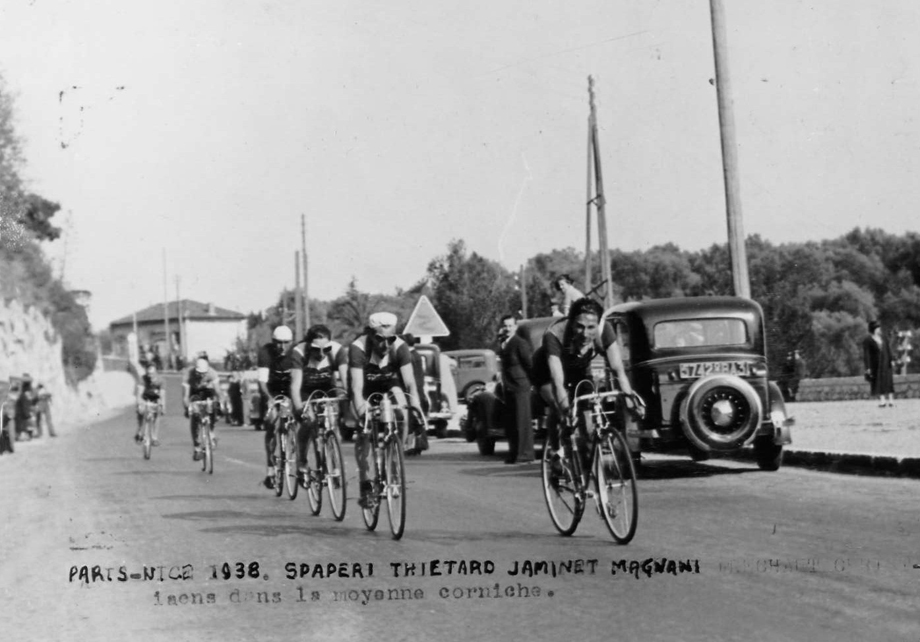 Joseph Magnani, on the right, during the 1938 Paris-Nice race – Photo courtesy of US Bicycling Hall of Fame, Jean Veneziano Collection

The author valiantly wades through the lukewarm cycling world that came in the period after World War II when American racing was pretty much at the club level in major cities, often animated by European immigrants, but Americans were present in small numbers in Europe, eking out a hardscrabble living as pros, or at the Olympics, where their presence was modest and success even more so. The most interesting story in this period is that of Art Longsjo, a speed skater who was an impressive cyclist and was the first American to participate in the Olympics in two different sports. A passionate amateur, his palmarès are impressive given the limited stage he had for his talents, talents never fully realized as his life ended early and tragically. A race, the Longsjo Classic, was established to honour his memory in 1960 and ran in various formats until 2020. The second-oldest road race in the United States after the Tour of Somerville in New Jersey, it was won by riders who went on to notable careers, including Connie Carpenter, Sue Novara, Rebecca Twigg, Jocelyn Lovell, Wayne Stetina, Louis Garneau, Davis Phinney, Lance Armstrong, and Chris Horner. 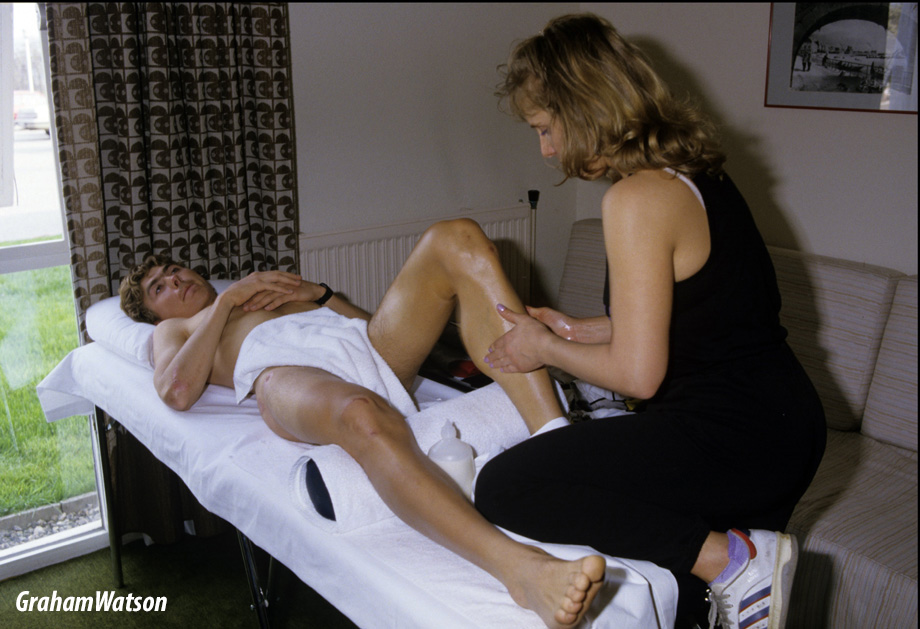 The difficulty with “Hearts of Lions” in its first incarnation was that bicycle racing, at least on the track, was so enormous in the first three decades of the 20th Century in America that it would take at least something like an American winning the Tour de France to offer comparable interest. In the new edition, not only is the 1989 Tour—in the opinion of many one of the most titanic battles on two wheels ever—nicely covered but so is the insane race up the Gavia at the 1988 Giro that lead to Andy Hampsten’s being the first (and only) American to win that Grand Tour. 7-Eleven was a breakthrough team for American cyclists in Europe and paved the way for other US-based riders. However, there is no account of Chris Horner’s 2013 Vuelta win or even a reference in the index to him or his American-ish team, Radio Shack-Leopard. The Elephant in the Room is, of course, the story of Lance Armstrong and the chapter “Liars Club” covers it swiftly and rather calmly, given the rage it inspires on both sides even eight years after release of the USADA’s “Reasoned Decision”. 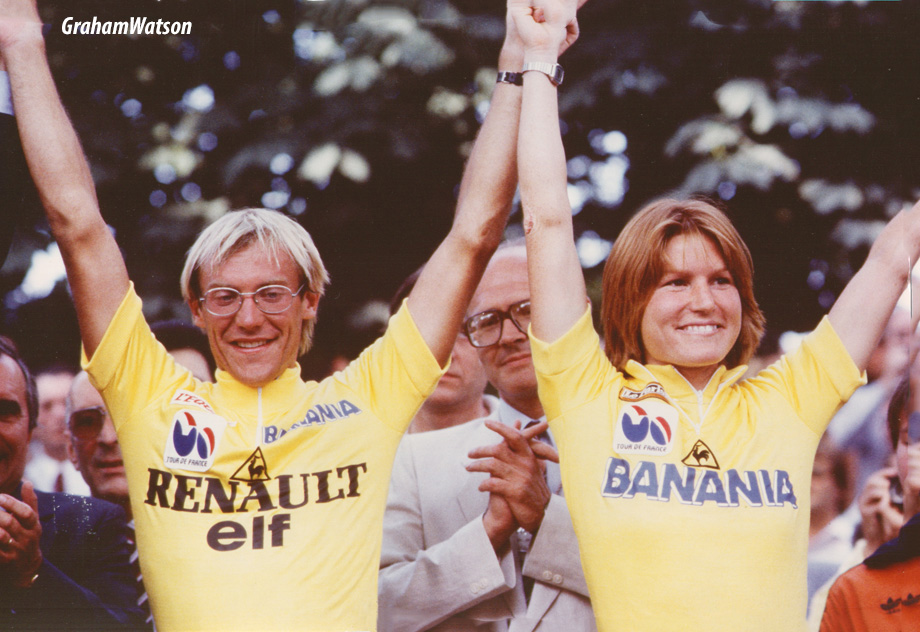 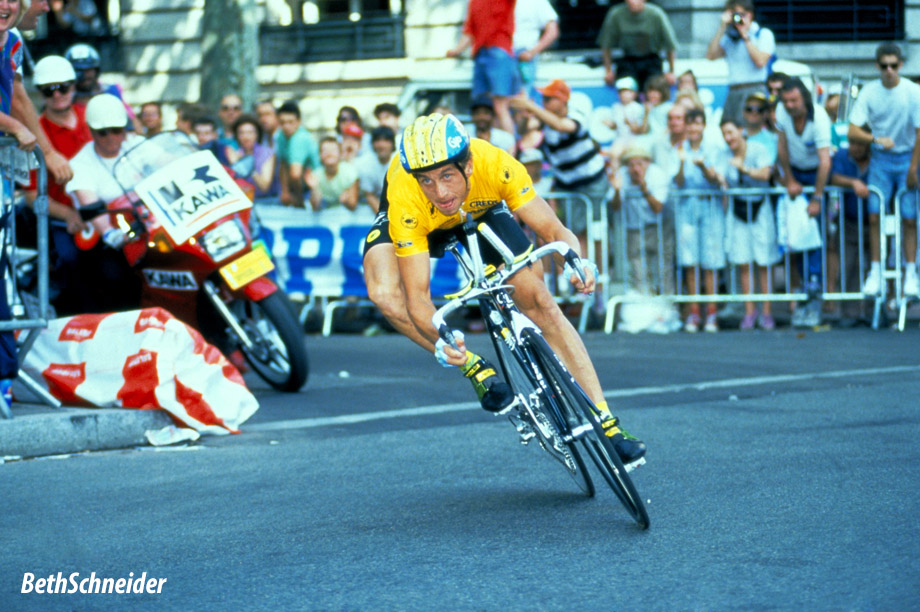 Peter Nye’s disappointment in Armstrong is palpable and we are taken back to the days when it looked as if the story of the endurance athlete who came back from cancer to dominate the Tour de France like no other had before was like a fairy tale. The big paydays, the private jets, the rock star lifestyle, the cancer groupies—nothing like it had been seen before. It was not just a big payday for Armstrong as cycling in the United States received huge coverage and his sponsors profited mightily, along with the entire cycling industry. But he just wouldn’t stay retired and his comeback was a flop and then Floyd Landis set in motion the smashing of the heroic monument. The author does not state the obvious: pro cycling was set back enormously in the United States as big races (CoreStates? The Tour of Georgia?) disappeared as sponsors fled. The Longsjo Classic ended due to the decline in entries over the last 5-10 years. There are some 17 races in the USA Cycling Pro Road Tour calendar but only a handful of those are stage races. There are no UCI World Tour events in the country although the Amgen Tour of California is expected to return in 2021. However, it might be that so many of those who were inspired by Armstrong in the late 1990s are the Middle-Aged Men in Lycra (and women) who today fill up the ranks of the growing number of Gran Fondo and other amateur events. 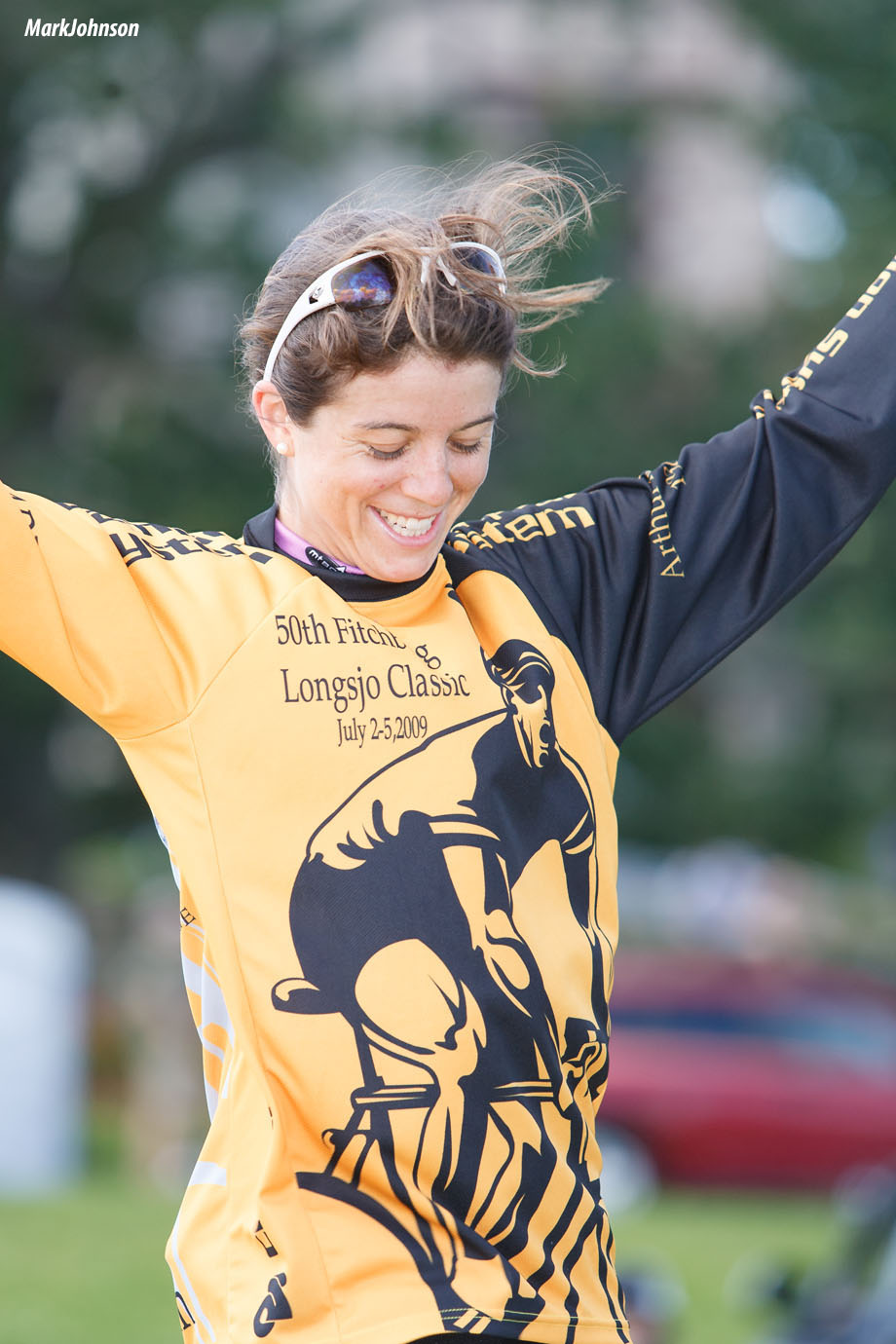 While the performance of American men might have not reached the heights they did in the past, “Hearts of Lions” nicely recounts the impressive success of American women on the track and on the road. In 1984 Connie Carpenter impressively sprinted to win the first every Women’s Road Race at the Olympics, with Rebecca Twigg taking the silver. There have been numerous victories for the women and some unlikely stories—Evie Stephens leaving a Wall Street job to race, taking wins at tough Classics races in Europe, and breaking the One Hour Record in Colorado. And anyone watching Kristin Armstrong’s three UCI World Championship time trial wins or 22 year old Chloé Dygart’s amazing 2019 gold medal ride in Yorkshire will have no doubt about the determination of those American women to succeed at world-class level. 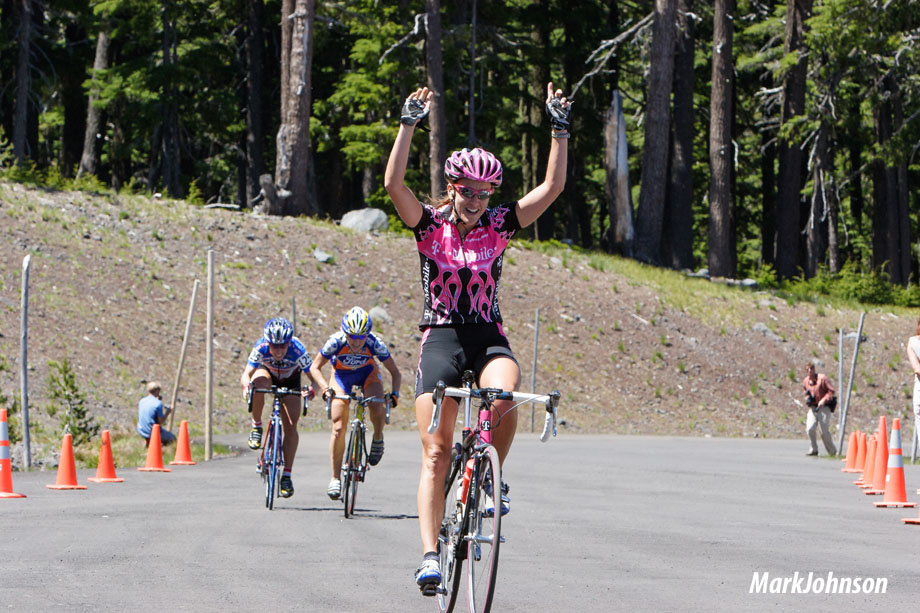 “Hearts of Lions”, despite its 500 page heft and impressive detail, is not an encyclopedia of American bike racing. The lack of big domestic road races alluded to above perhaps works against the growth of the sport but the book does not cover the ones that did take place in the modern era. The Tour de Trump of 1989-1990 was renamed the Tour DuPont and ran until 1996 in the Eastern United States and winners included Greg LeMond and, twice, Lance Armstrong. The author tells of his brief (very brief) meeting with The Donald but nothing much about the race or its continuation. The Tour of California has run for 14 editions and the Tour of Utah 15. In spite of his fine writing about women’s racing, he does not mention the Ore-Ida/Women’s Challenge race in Idaho which ran for 19 years and was considered the top event for women in North America. There have been American-based teams at the World Tour level—USPS, RadioShack, Garmin—and US sponsorship from companies including bike-makers Trek and Cannondale but also firms not in the cycling industry such as Computer Sciences Corporation and outdoor clothing firm Columbia. But let’s forget about Rock Racing, please! 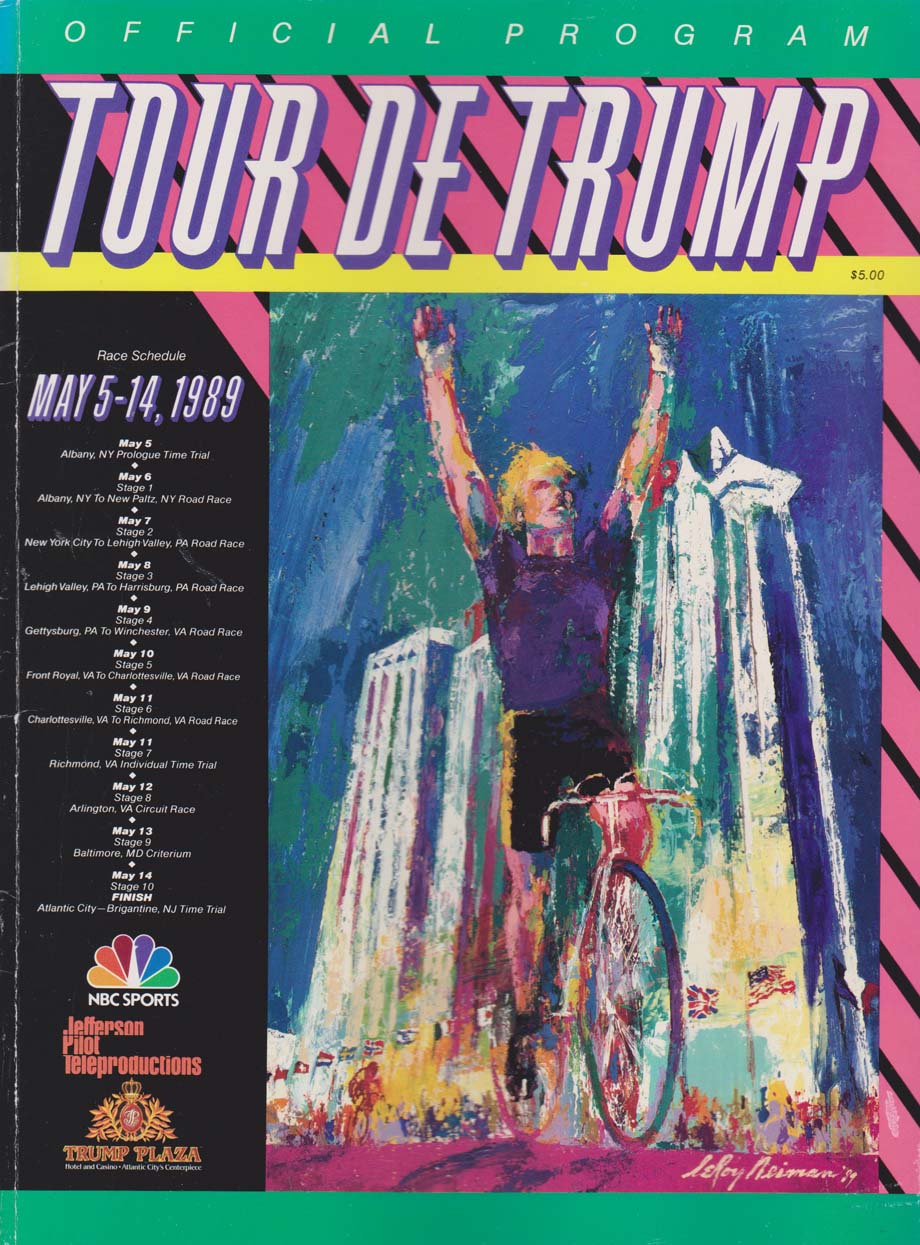 For all the excitement generated by those Tour de France wins, men’s professional bike racing remains a niche sport in America, with women’s events and track racing even more niches within that niche. There are books by American pros about the Poverty Row lifestyle you can expect at even the top level in the USA but no matter the era or the level, “Hearts of Lions” is appropriately titled. Full of great details—the character of Dave Stoller in “Breaking Away” was based on a real person!–and unforgettable athletes and promoters, along with the author’s own entertaining reminiscences, it remains the indispensable book on American bicycle racing history. 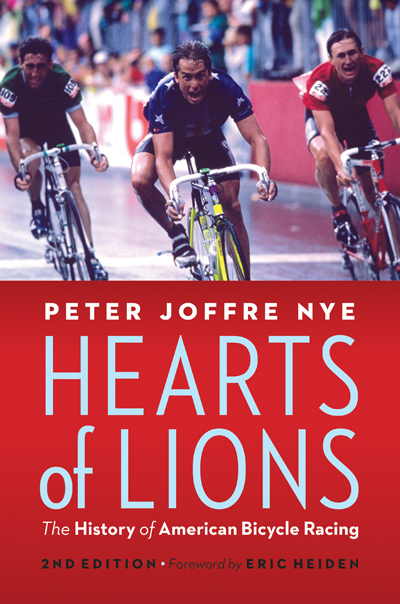 “Hearts of Lions – The History of American Bicycle Racing” by Peter Joffre Nye is available from AMAZON.COM.