Worlds Race Report: The new World cycling champion is Mads Pedersen of Denmark. The young Dane out-sprinted Matteo Trentin (Italy) and Stefan Küng (Switzerland). Top favourite Mathieu van der Poel (Netherlands) was part of the decisive leading group, but cracked on the run in, as did Trentin’s countryman, Gianni Moscon. Peter Sagan (Slovakia) jumped away from the peloton for 5th. 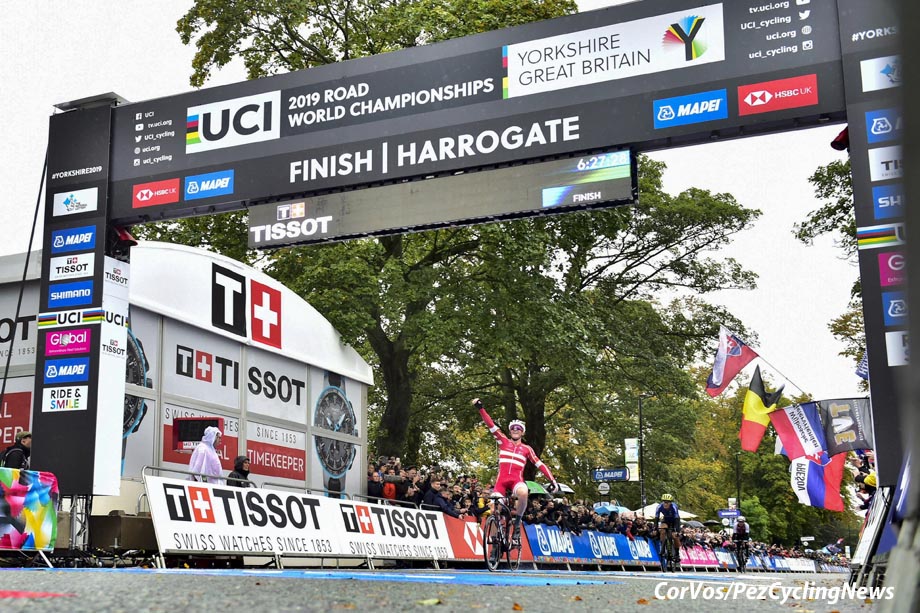 The start of the race was postponed by half an hour, because the organisation had to make a course change due to the heavy rainfall. The UCI announced in the morning that the climbs of Buttertubs and Grinton Moor had been withdrawn from the course. After about 80 kilometres, a detour took the A684 towards the town of Leyburn, where the original route was resumed. The riders now had to complete nine (instead of seven) local circuits in and around Harrogate. 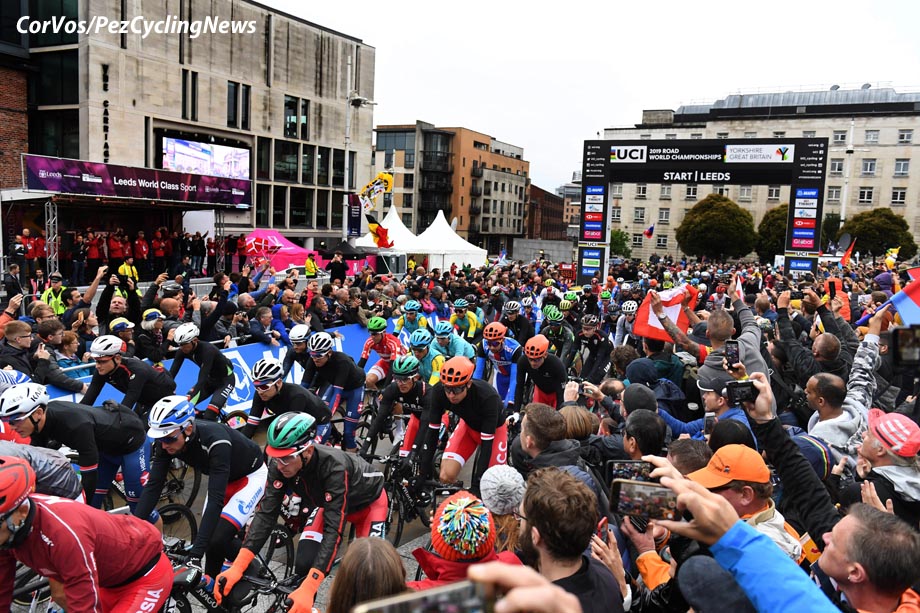 Men Elite Road Race – Leeds to Harrogate – 261km
Riders will wind their way into the Yorkshire Dales before a trio of significant climbs come one after another. Splits could well emerge if the pace is pushed at the head of the peloton. A battle to regain contact should then develop on the fast approach to Harrogate. Seven laps of the tough and technical Harrogate circuit will ensure only the strongest survive for a chance to claim the iconic rainbow jersey. There was a last minute course change due to the weather conditions and standing water on the road at the top of the course. There will be 9 laps of the finishing circuit in Harrogate. The race distance is shorter by 19 kilometres. 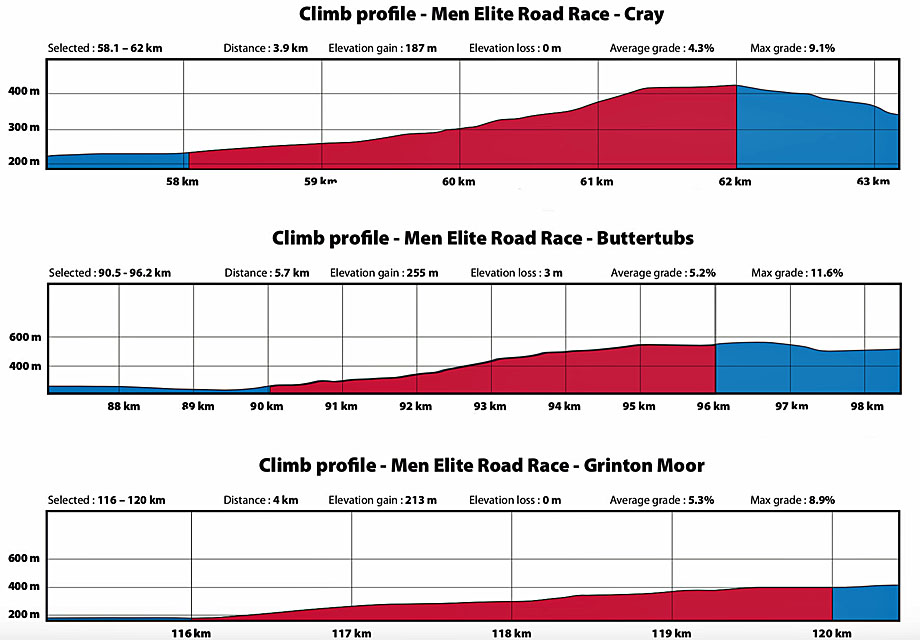 The weather gods were not favourable to the riders, but the race continued. The first real attack came from Liège-Bastogne-Liège and the Tour of Lombardy winner, but Daniel Martin was not allowed much of a gap by the peloton. Martin’s attack inspired some other big names, as Vuelta winner Primož Roglič, Nairo Quintana and Jan Polanc also tried. The peloton did not let anyone go, so after 20 kilometres it was all together. After a while Polanc jumped away again. The Slovenian from soon had the company of the German Jonas Koch and Giro winner Richard Carapaz. 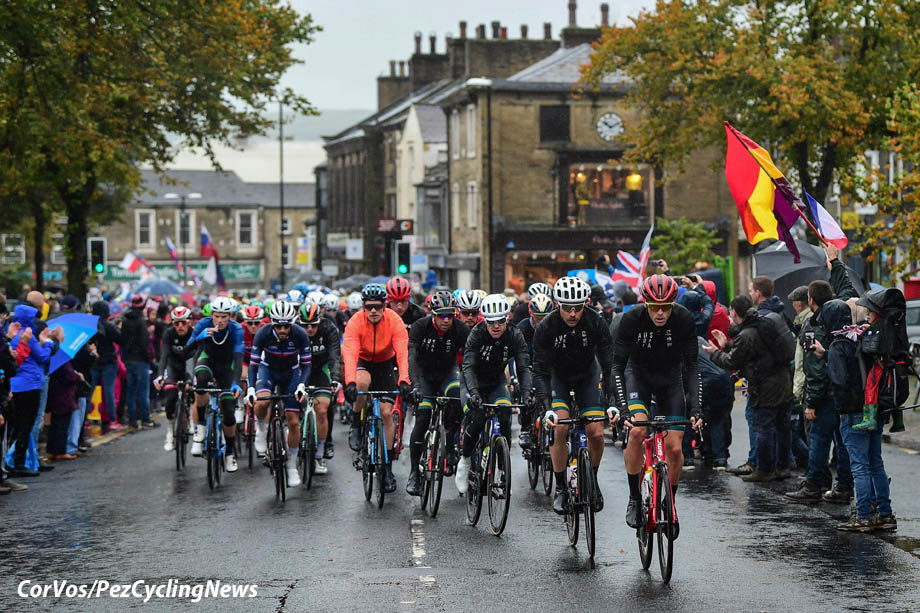 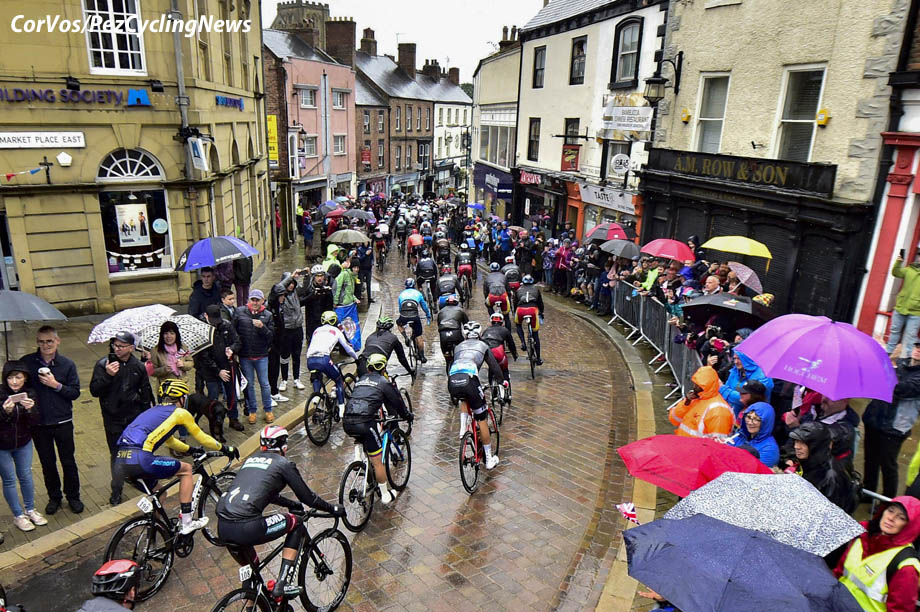 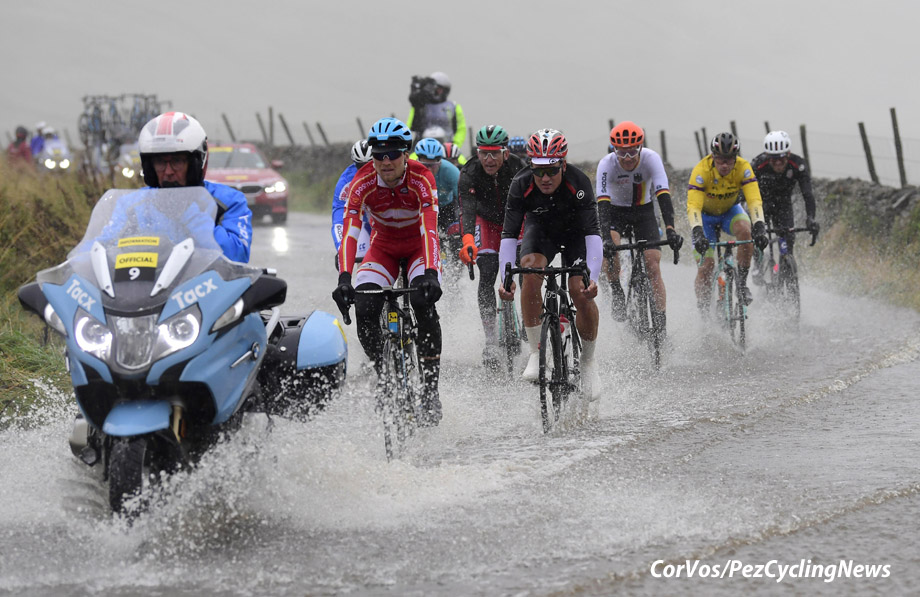 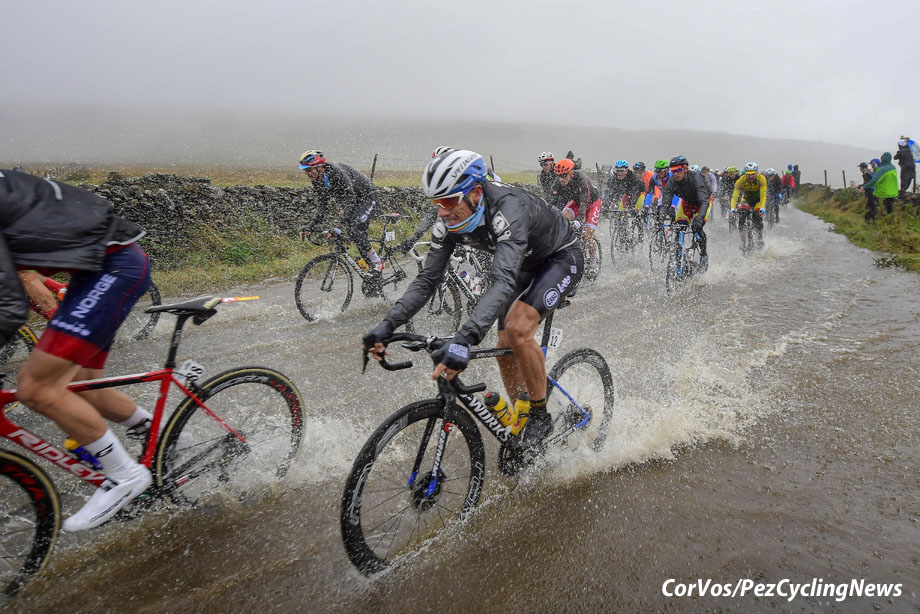 The leading group soon had a 3 minute lead, back in the peloton the chase was led by the Netherlands (for Van der Poel), Australia (Michael Matthews) and France (Julian Alaphilippe). The lead of the front riders steadily increased to more than 4 minutes, but Jos van Emden and Rohan Dennis – on a BMC bike – kept the leaders close. Favourites: Ivan García, Patrick Bevin, Vasil Kiryienka and Natnael Berhane were amongst the abandonments. The lead continued to fluctuate around 4 minutes. Due to the bad weather there was no TV! 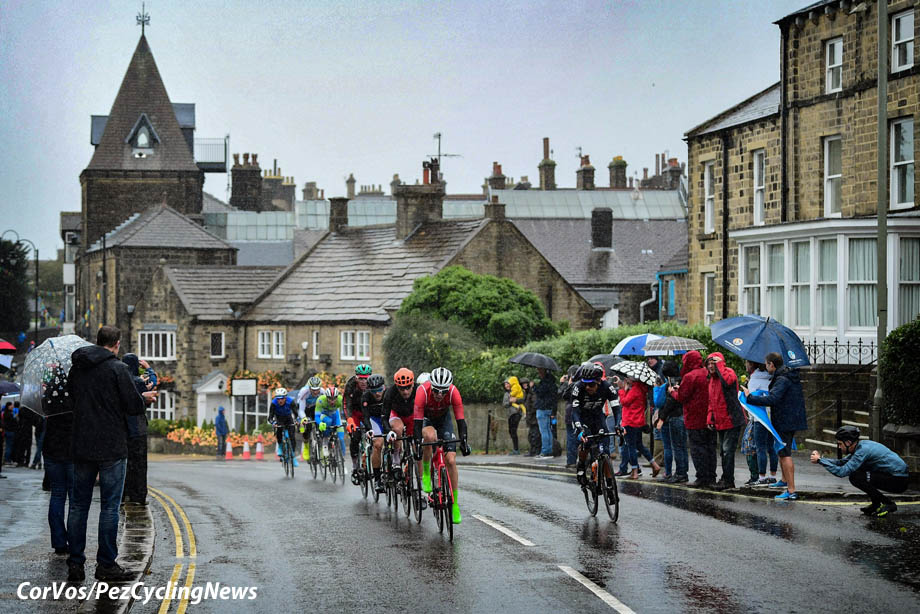 After more than three hours of racing, the eleven man group turned onto Parliament Street for the first time, the race could really get going. The peloton didn’t take long, but even before the finish line was crossed on the first lap there was a crash, with Philippe Gilbert as the biggest victim. Gilbert was suffering from his crash, he was helped by Remco Evenepoel, who sacrificed himself for the multi-champion. Sebastian Langeveld was also involved in the crash, but the Dutchman could also continue. Gilbert and Evenepoel had to chase hard to catch the peloton, which was thinning fast. It was the Frenchman, Rémi Cavagna who was causing the damage. 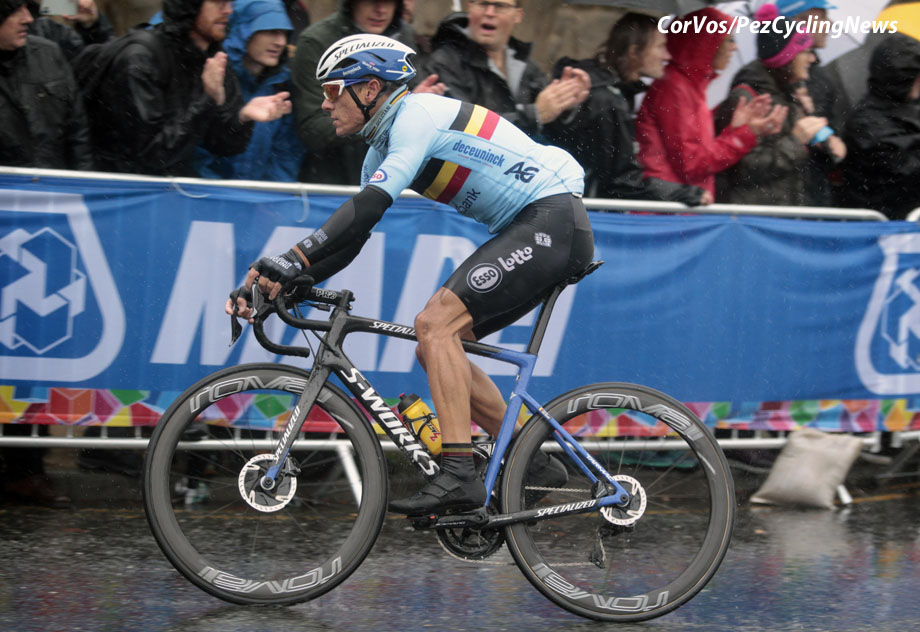 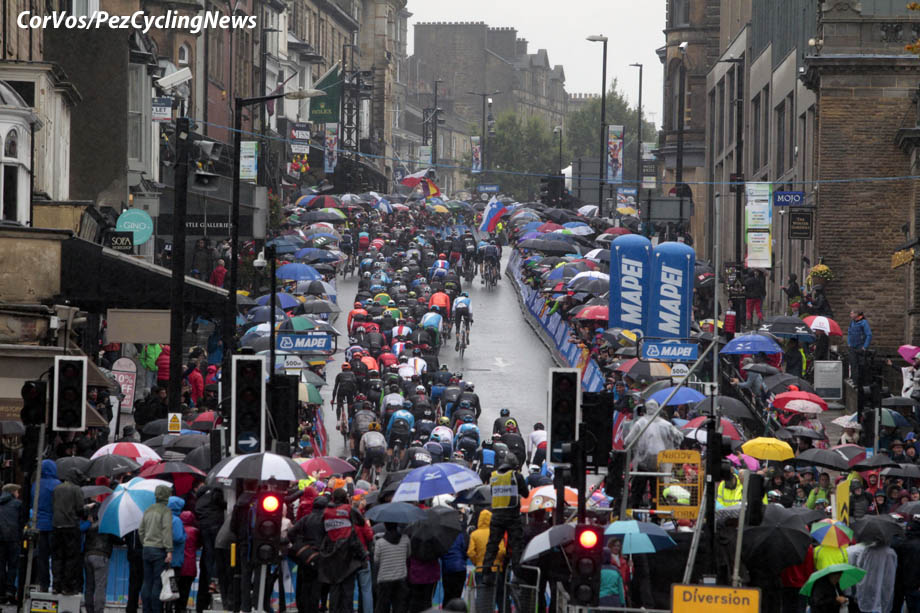 Gilbert had to call it a day, as did Alejandro Valverde along with Sam Bennett who was dropped by the bunch which was down to only seventy riders with 70 kilometres still to go. France and the Netherlands were still leading the way for Alaphilippe and Van der Poel, but also Peter Sagan, Matteo Trentin, Matthews and Greg Van Avermaet were among them. The break had been long caught, so it was only a matter of time before a new attack came. It was Lawson Craddock who made the move and was joined by Stefan Küng. At 46 kilometres from the finish they were joined by Mads Pedersen. 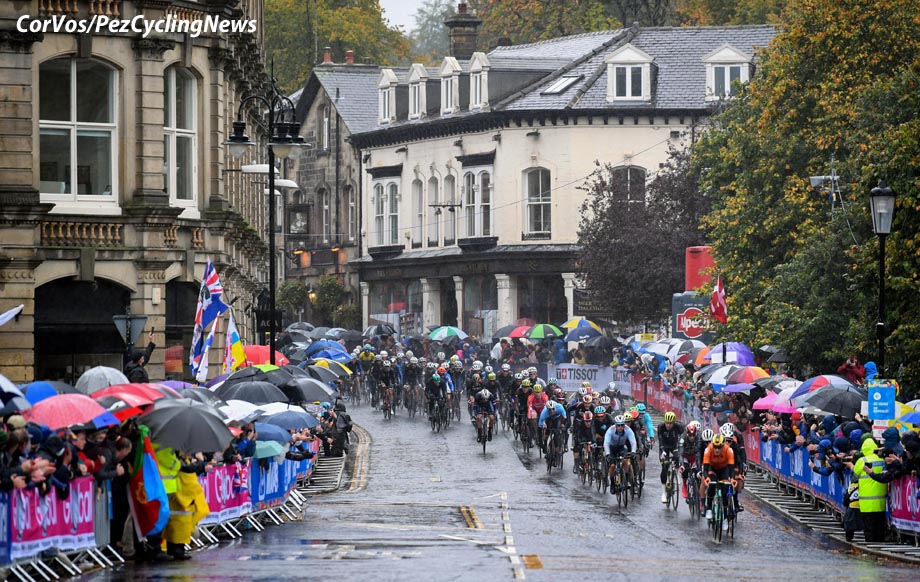 The young Dane – second in the Tour of Flanders last year – went past Craddock and Küng, but the Swiss rider was able to hang on. The dropped Craddock was passed by Mike Teunissen and the Italian Gianni Moscon, so with 40 kilometres to go, there were four leaders. Teunissen, Moscon, Pedersen and Küng. 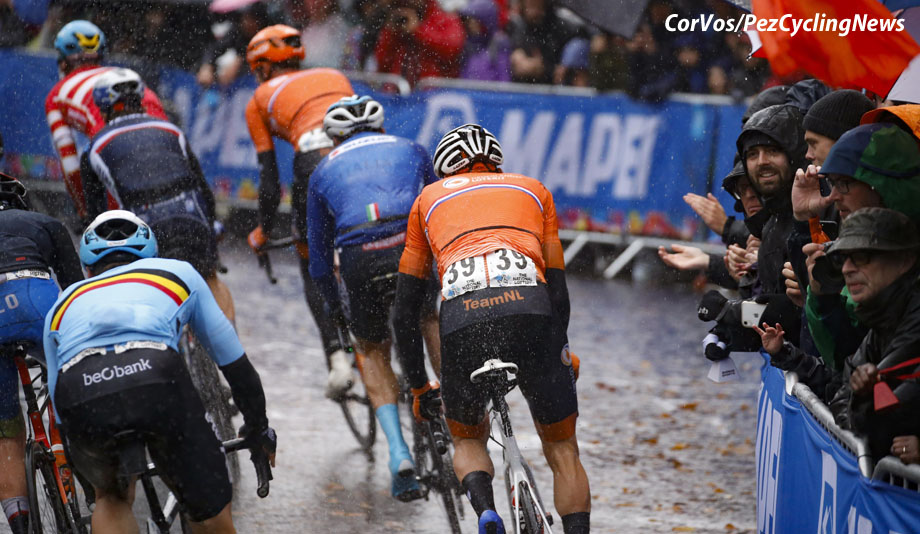 These four attackers took half a minute from the chasing group, and it was up to the French team to chase again. Trentin and Van der Poel crossed to the front group, who had lost Teunissen. 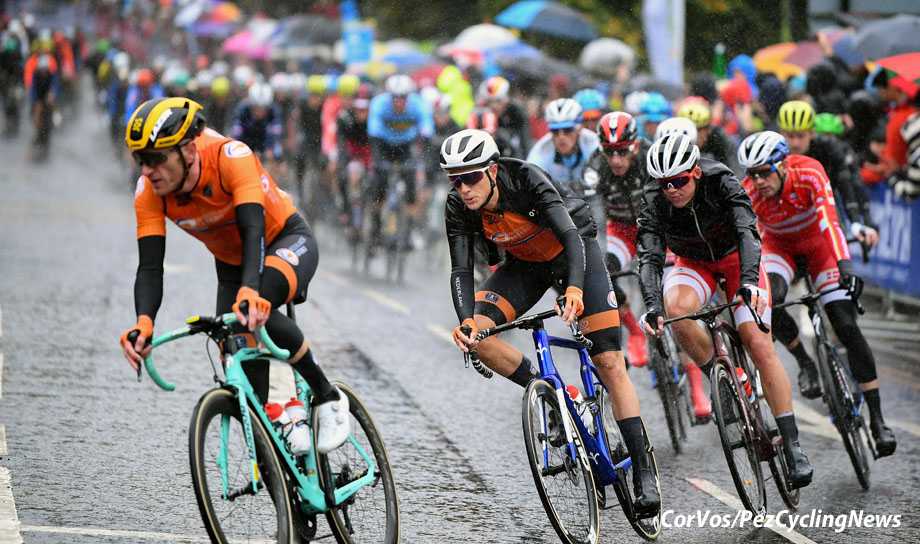 The other favourites: Sagan, Van Avermaet and Kristoff didn’t follow and the Belgians had missed the battle and had to go full steam ahead, but Wellens and Dylan Teuns did not come close. The difference between the Van der Poel group and the peloton led by Belgium increased to 45 seconds with 25 kilometres to race. 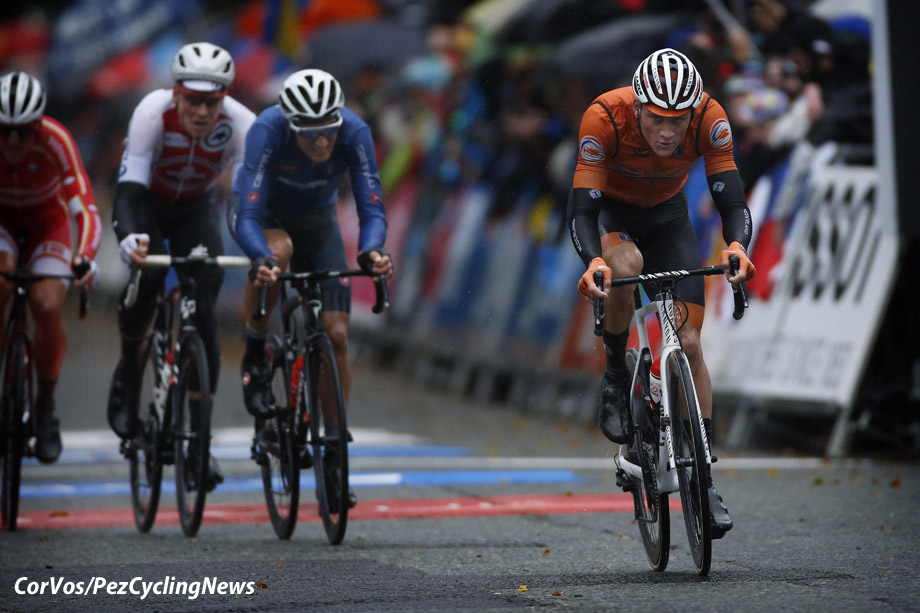 On the penultimate passage of the Harlow Moore Road (1.1 km at 5.6%) the lead was still 45 seconds and it was the same at the finish line. Van der Poel, Trentin, Pedersen, Küng or Moscon would be the new World champion. 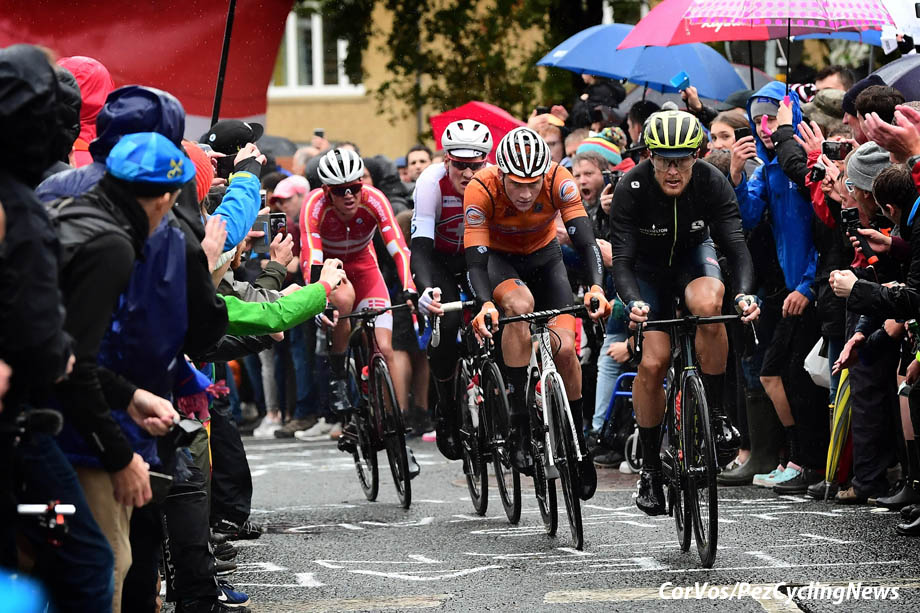 Trentin had his countryman, Moscon, to do the lead work, which proved to be the death blow for Van der Poel. The favourite suddenly lost all his strength, perhaps due to hunger or the cold. Trentin was now the favourite, and on paper, the fastest finisher in the leading group. 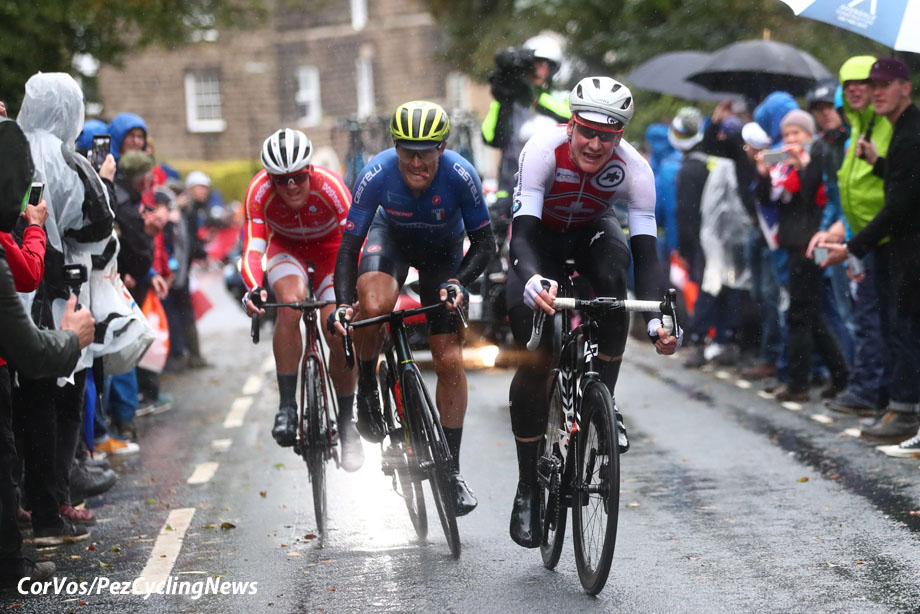 Küng accelerated at five kilometres from the finish, managing to hurt his companions, but Trentin and Pedersen stuck to his wheel, while Moscon lost contact. The race would be between just three men: Pedersen, Trentin and Küng on Parliament Street. The Italian seemed unable to lose and started the rush for the line, but Pedersen was surprisingly the fastest at the end of a very wet day in Yorkshire. 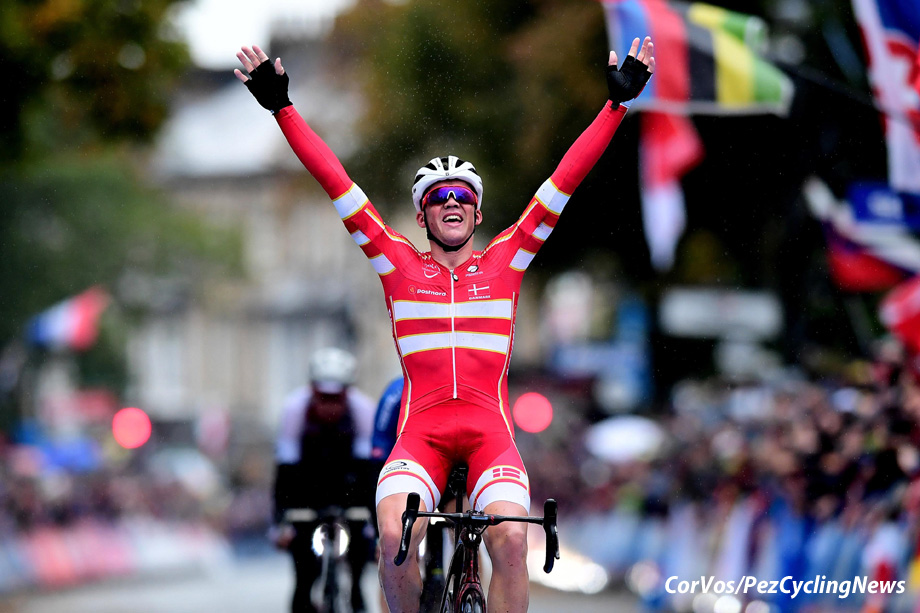 World champion, Mads Pedersen (Denmark): “I was very sure of my sprint. My job was to jump away in the pre-final. I had to act as a springboard for Jakob Fuglsang and Valgren Andersen. But they did not come with Mathieu van der Poel and Matteo Trentin. Then I started playing in the leading group. After 6.5 hours on the bike everyone is on the limit. Mathieu and Matteo too. You have to be focused all day long and hope you don’t have bad luck. Sprinting after 6.5 hours is also different. I was very sure of my sprint. That I win here is incredible. The rainbow jersey is a dream for everyone to wear. It is also an incredible feeling for me.” 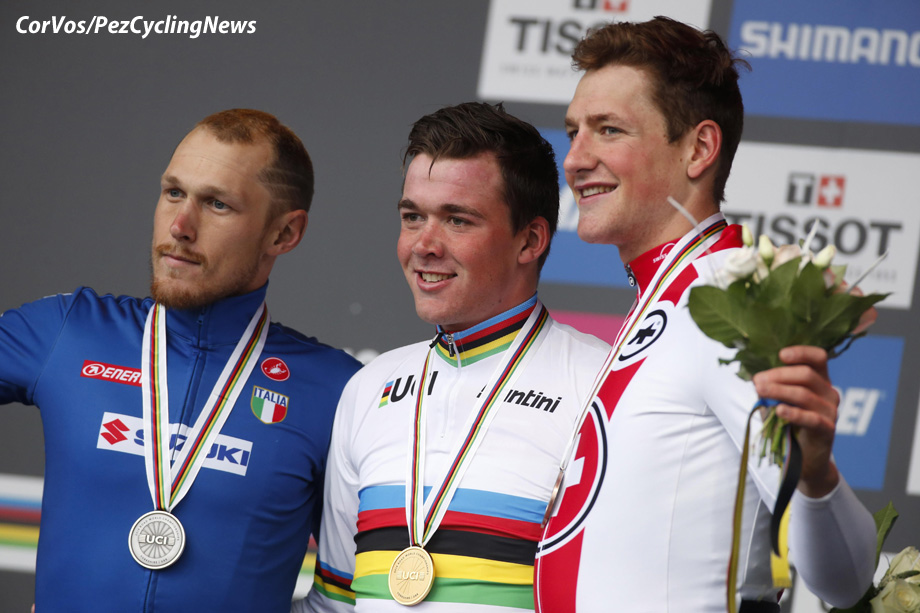