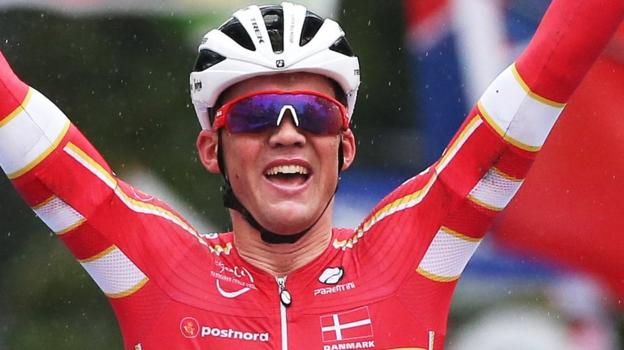 Pedersen, 23, clawed his way back into the leading trio after initially being dropped on the final lap in Harrogate.

Even then Italy’s Matteo Trentin was the favourite in the sprint finish but Pedersen surged past to beat him into second, with Switzerland’s Stefan Kung taking bronze.

“This is unbelievable,” said Pedersen.

“I didn’t expect this and it wasn’t the plan.”

Pedersen is only the second Dane to win a world road race title after Amalie Dideriksen won the women’s event in 2016.

After attacking to join Kung out front with 45km to go, Pedersen said he expected team-mates Michael Valgren and Jakob Fuglsang to bridge across but when they failed to do so, he just tried to “survive and hope for the best” after nearly six and a half hours of racing.

“I hoped that when I saw the finish line all the pain would be gone and I could do a good sprint,” he said.

“It’s every rider’s dream to wear the rainbow jersey – for me to do it now is unbelievable.”

Heavy rain overnight forced organisers to shorten the course by 23.5km and re-route the race, removing the two biggest climbs of Buttertubs and Grinton Moor because of flooding and adding two more laps of the finishing circuit of Harrogate.

Even with those changes it was a gruelling day for the riders in almost constant rain and cold temperatures on an undulating course that still had patches of standing water – only 46 of the 197 starters finished.

The conditions caused an interruption to the TV coverage as, with the helicopters grounded, the sole plane being used to relay pictures from the motorbikes had to land and refuel just as the race reached the finishing circuit, shortly before the early breakaway of 11 riders were caught.

Over half the field had already abandoned when Kung and American Lawson Craddock attacked with 65km to go, stringing out the peloton behind.

They stayed clear for 20km before Craddock dropped back and quit the race, while Pedersen, the Netherlands’ Mike Teunissen and Italy’s Gianni Moscon joined Kung.

A group of contenders, including three-time world champion Peter Sagan and Olympic champion Greg van Avermaet, were caught out at 35km to go when Trentin and Tour of Britain winner Mathieu van der Poel attacked to join the front group.

Teunissen dropped back but compatriot Van der Poel looked to be on course to fulfil his billing as one of the pre-race favourites, only to suddenly crack at 12km to go.

With the chasing group failing to get organised, Trentin and Kung drove on, distancing Moscon and putting Pedersen briefly in trouble.

Pedersen dug in to get back on with 5km to go and stayed calm when Trentin, who has eight Grand Tour stage wins including several sprint victories, launched 200m from the line.

Easing up to the Italian’s wheel, Pedersen swept round him and had time to raise his hands as he crossed the line, becoming the youngest world champion since Spain’s Oscar Freire in 1999.

Moscon held on for fourth behind, while Sagan attacked late on to take fifth.

Tao Geoghegan Hart was the top British finisher in 26th after leader Ben Swift dropped out of the chasing bunch on the final lap.