Ed Roadside: The Men’s Under 23 Road Race had it all! Hard conditions, tough racing and… Controversy. Not the best end to the day as ‘winner’ Nils Eekhoff was disqualified for spending a little too much time behind his team car after a crash. Ed Hood was there to see the full story unfold. 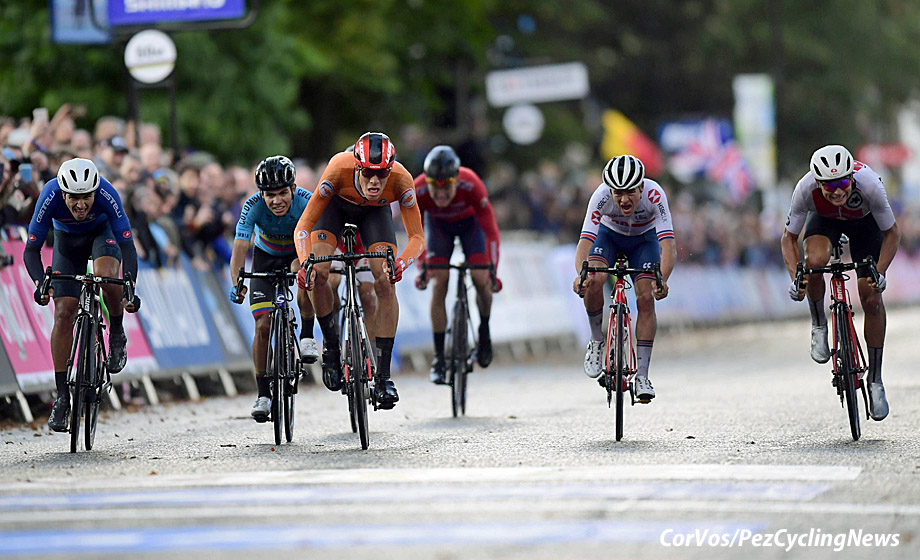 Home favourite Pidcock’s head drops as he realises he doesn’t have ‘medal legs’; fourth place is of no use to a young man who’s already been champion of the world on three occasions.
He wheels to a halt, there are commiserations from team mates before he starts the forlorn pedal back to the bus. 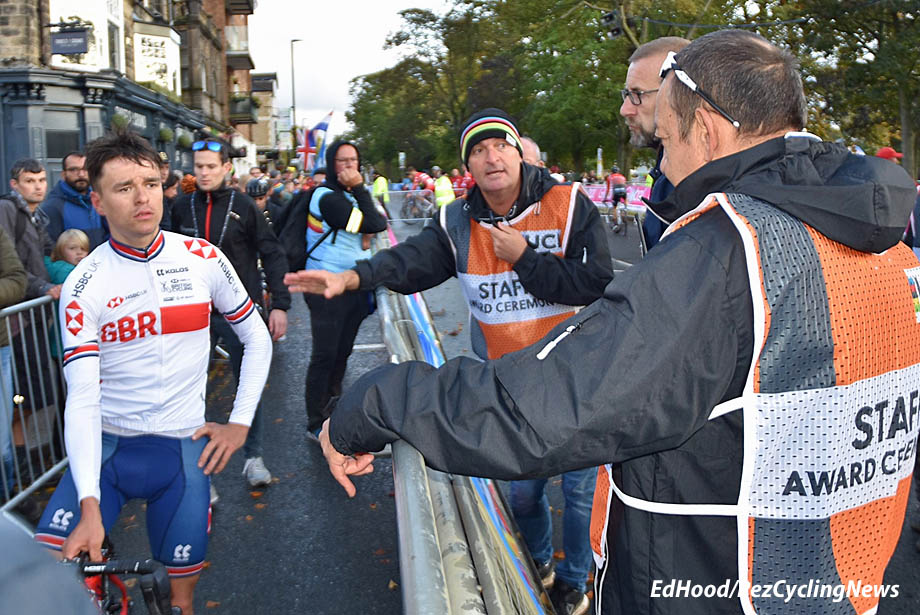 But then the UCi podium guys appear and direct him out of the ‘warm down’ zone and over towards the podium; with all those hard kilometres in his legs and the disappointment of ‘blowing’ the only chance he’ll ever have to win a road world title on his home patch he remonstrates somewhat aggressively with the officials – he knows he only finished in fourth place and just wants to get back to the bus. What none of us – including Pidcock – knew was that the ‘jury was out’ on big Dutchman, Nils Eekhoff’s ‘victory’.Battistella 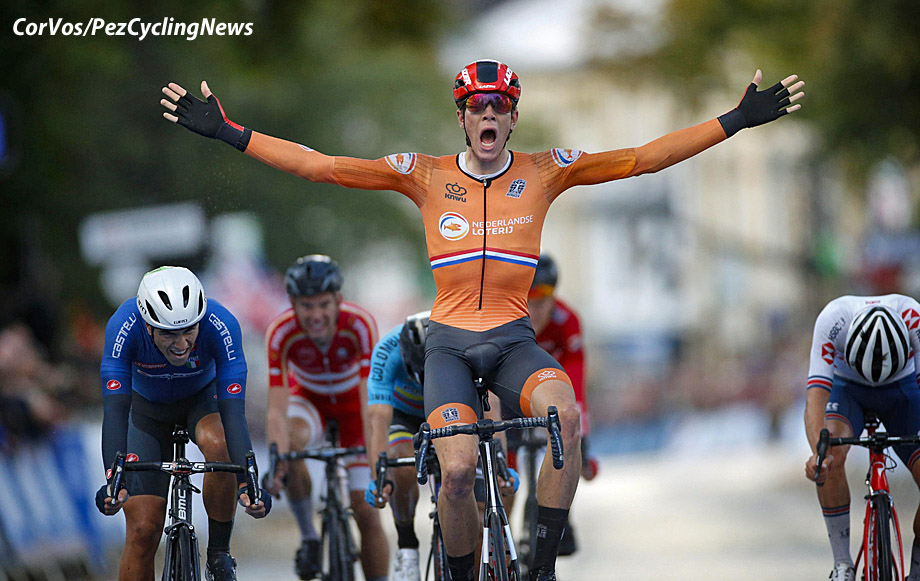 The 21 years-old Sunweb rider with, like Pidcock, a Junior Paris-Roubaix to his name, had been on the deck mid-race and had ‘drafted’ the Netherlands team car back to the shelter of the peloton. Generally, if a rider has crashed and gets, ‘a bit of help’ to get back then the commissars turn a blind eye. And surely it would have been better to put the man out of his misery rather than believe he was World Champion then have it snatched away? 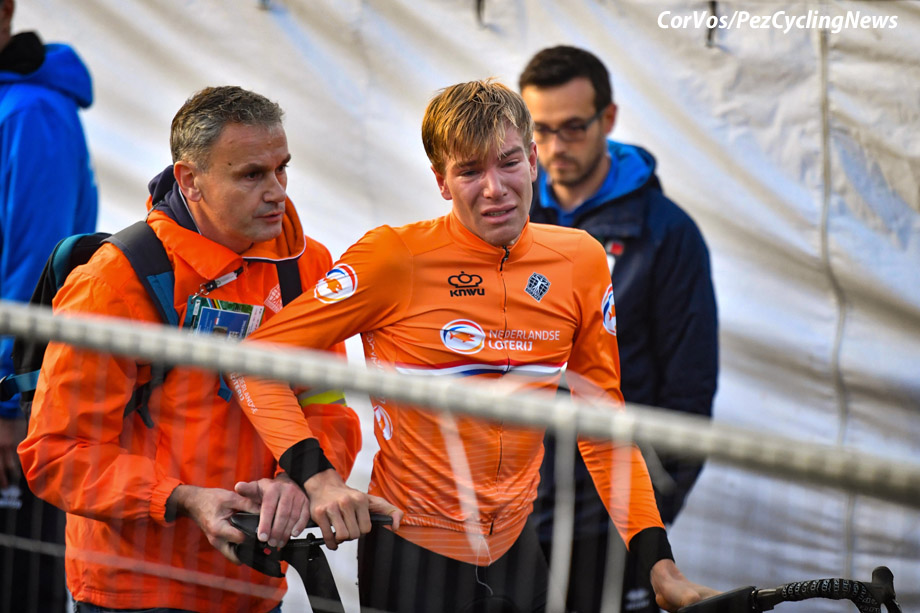 But as ace photog John Pierce pointed out to me:
“The Worlds is the only event the UCI actually own; and it’s a one day race, not a stage race. In a stage race the ‘blind eye’ rule applies. There were other riders who were left behind, and stayed behind because they were not paced back. Also how can you have a world champion who has been paced for some of the race? As for the DQ coming after the event, a DQ during a race is not possible.”

The first two are fair points Mr. Pierce but you’re wrong on a DQ during the race, one gentleman we spoke to, who knows about these things, said that the commissars had the power to DQ the rider and pull the team car out of the race right there and then. 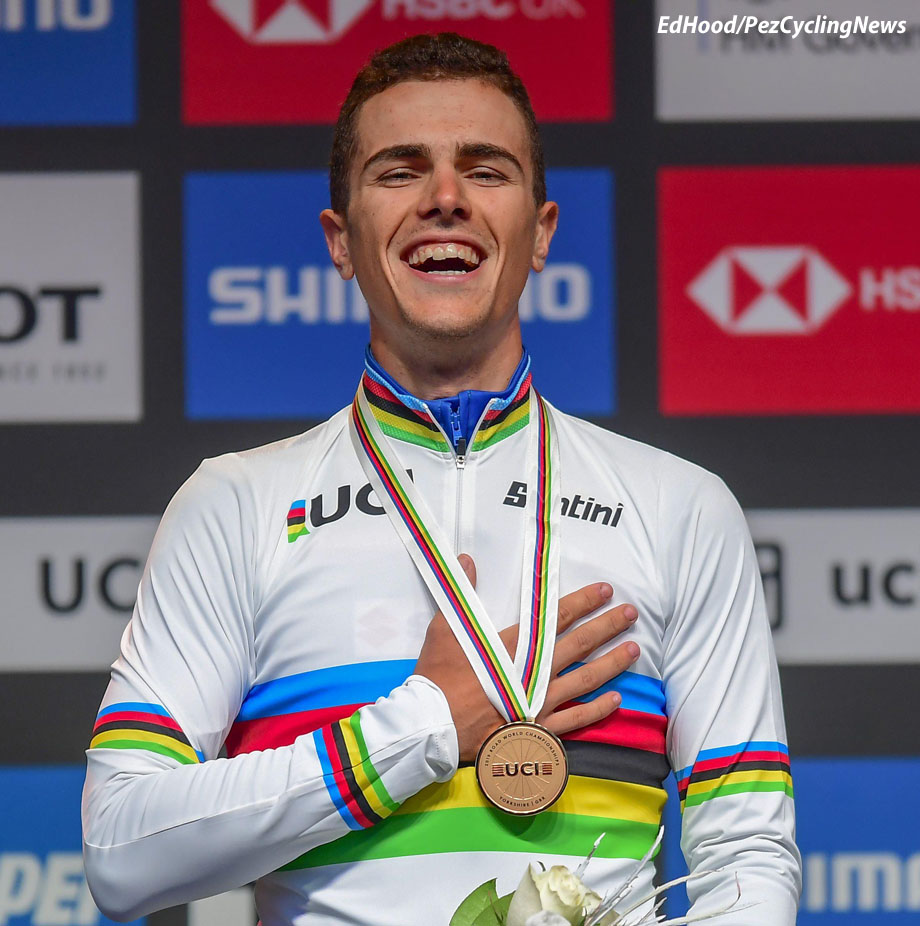 The Italians certainly didn’t share the ‘harsh’ view, with their man, Samuele Battistella, who was second in the sprint, taking the rainbow jersey from Stefan Bissegger of Switzerland and aforementioned local boy Pidcock. The Italian rides with Dimension Data’s continental team – bringing some much needed joy to the DD name – and is a product of the mighty Zalf u23 squadra in Italy. This year he won the much sought after Giro delle Belvedere in Treviso along with a raft of other top placings in Italy. 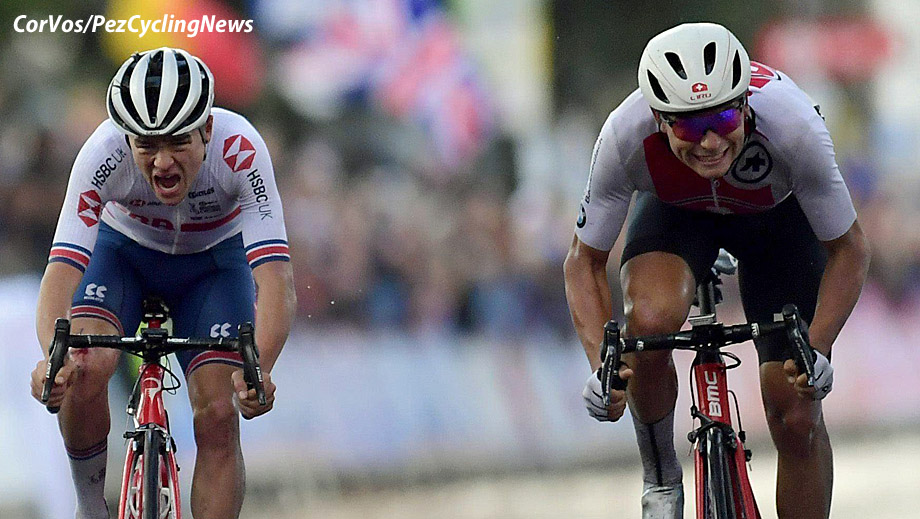 Bissegger’s background is on the track, he’s a former Junior World Pursuit Champion; Swiss National Time Trial Champion and has had wins this year in races as diverse as the Tour of Wellington in New Zealand and Tour de l’Avenir. Both riders of the highest stature, then.

The race started in Doncaster on a blowy morning in what we thought were conditions of the utmost secrecy, such was our difficulty in finding the start. The field was assembling as we finally arrived and we sought out who we thought would be the favourites. 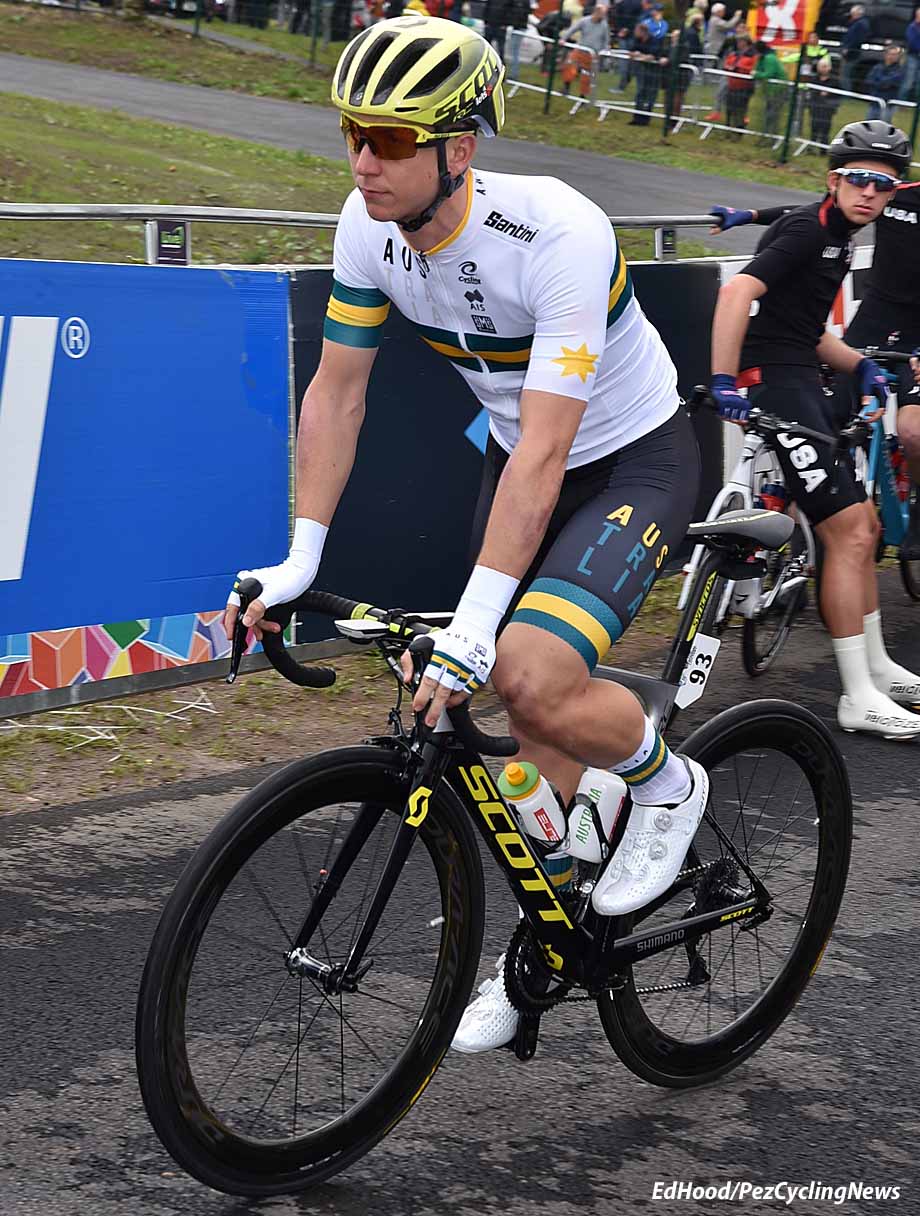 Aussie and SEG Racing Academy graduate, Kaden Groves who’s now a Mitchelton-Scott man won two stages in the prestigious Monts et Chateaux in Belgium as well as stages in the Circuit des Ardennes and Ronde de l’Isard – he would finish 14th on the day. 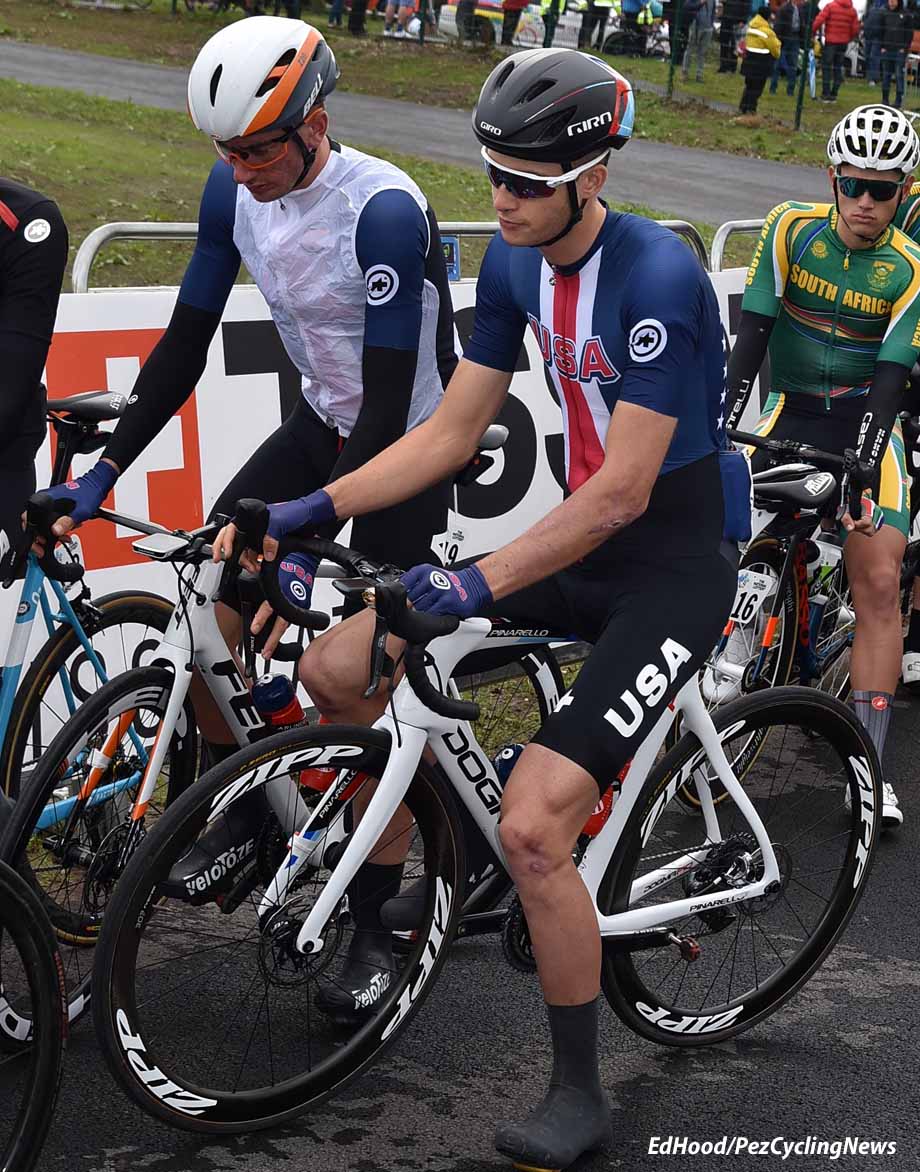 Whilst the USA’s Ian Garrison, who’s with Axel Merckx’s Hagens Berman Axeon squad was second in the u23 TT Worlds the other day and is obviously a man on form – 90th on the day must have been disappointing for the man. 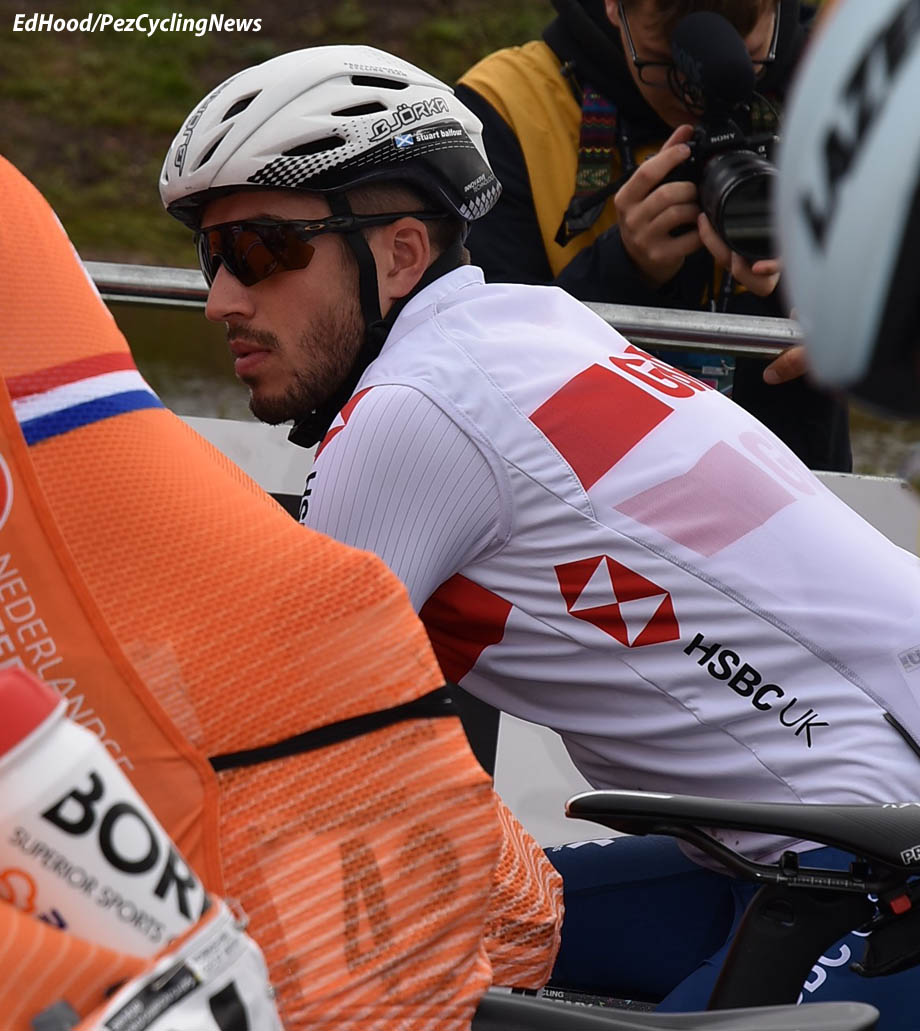 Scotsman Stuart Balfour was looking cool, calm and collected before the start and would produce one of the rides of the day in support of Pidcock, ‘up the road’ for most of the day. 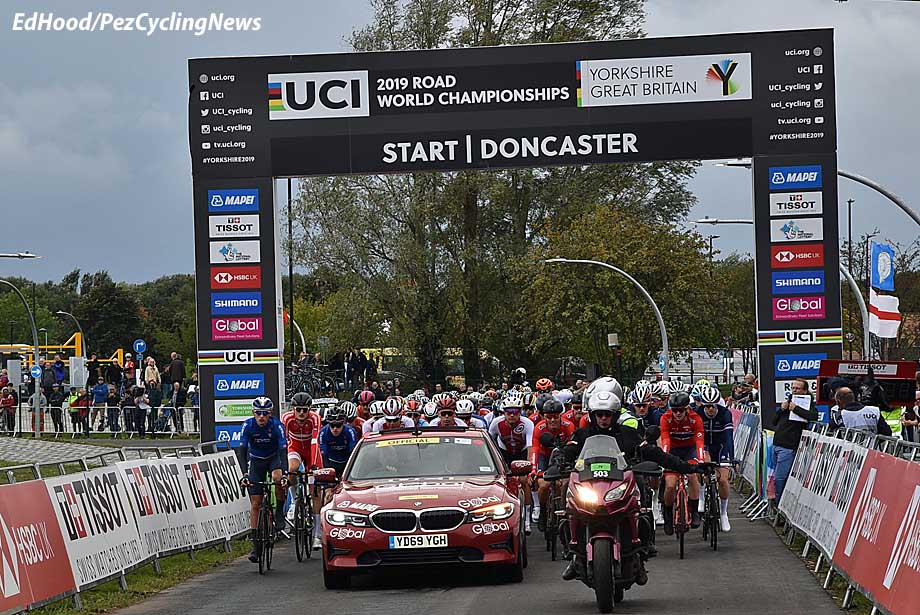 The big field rolled out bang on time at 14:00; brought forward 10 minutes – and with one lap of the Harrogate circuit shaved to avoid finishing in the dark. 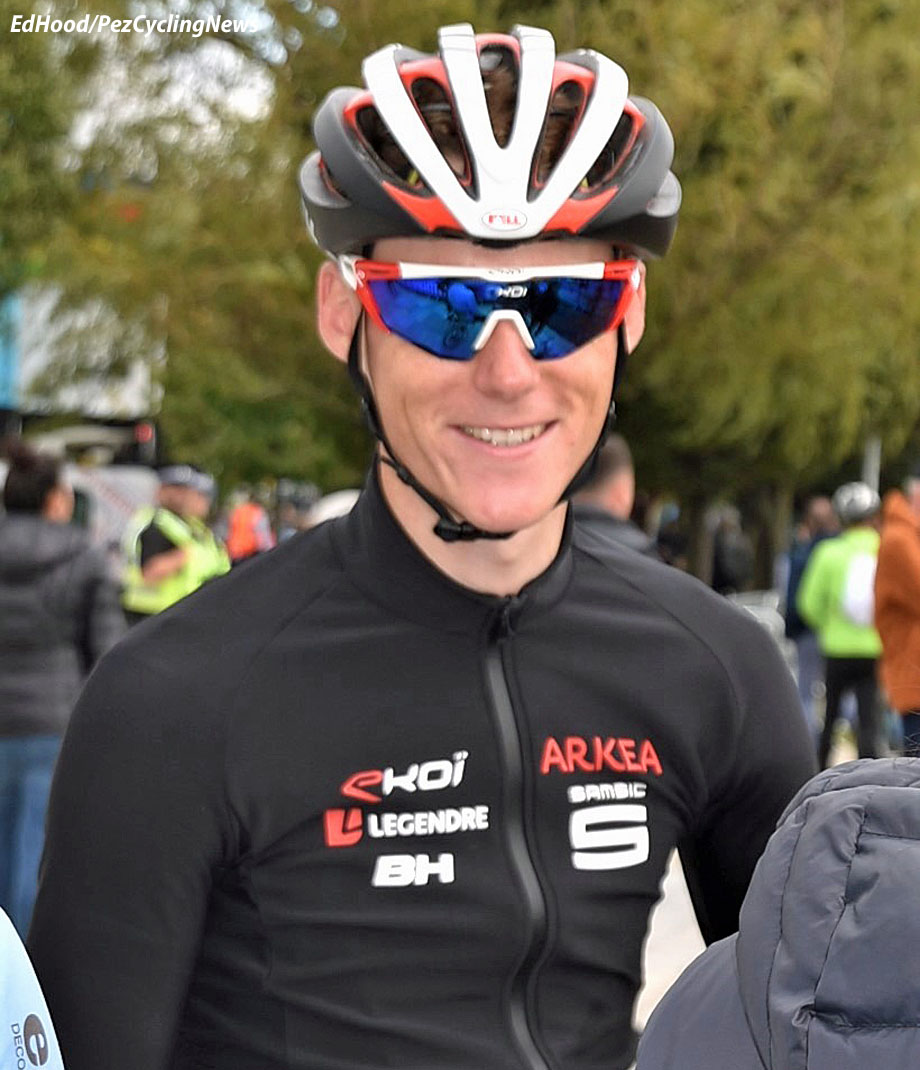 Former British Elite Champion, Connor Swift (Arkea-Samsic) was on hand to watch the start and was happy to chat; he’s happy with the French team and is looking forward to ‘new look’ Arkea-Samsic with Quintana on board in 2020. 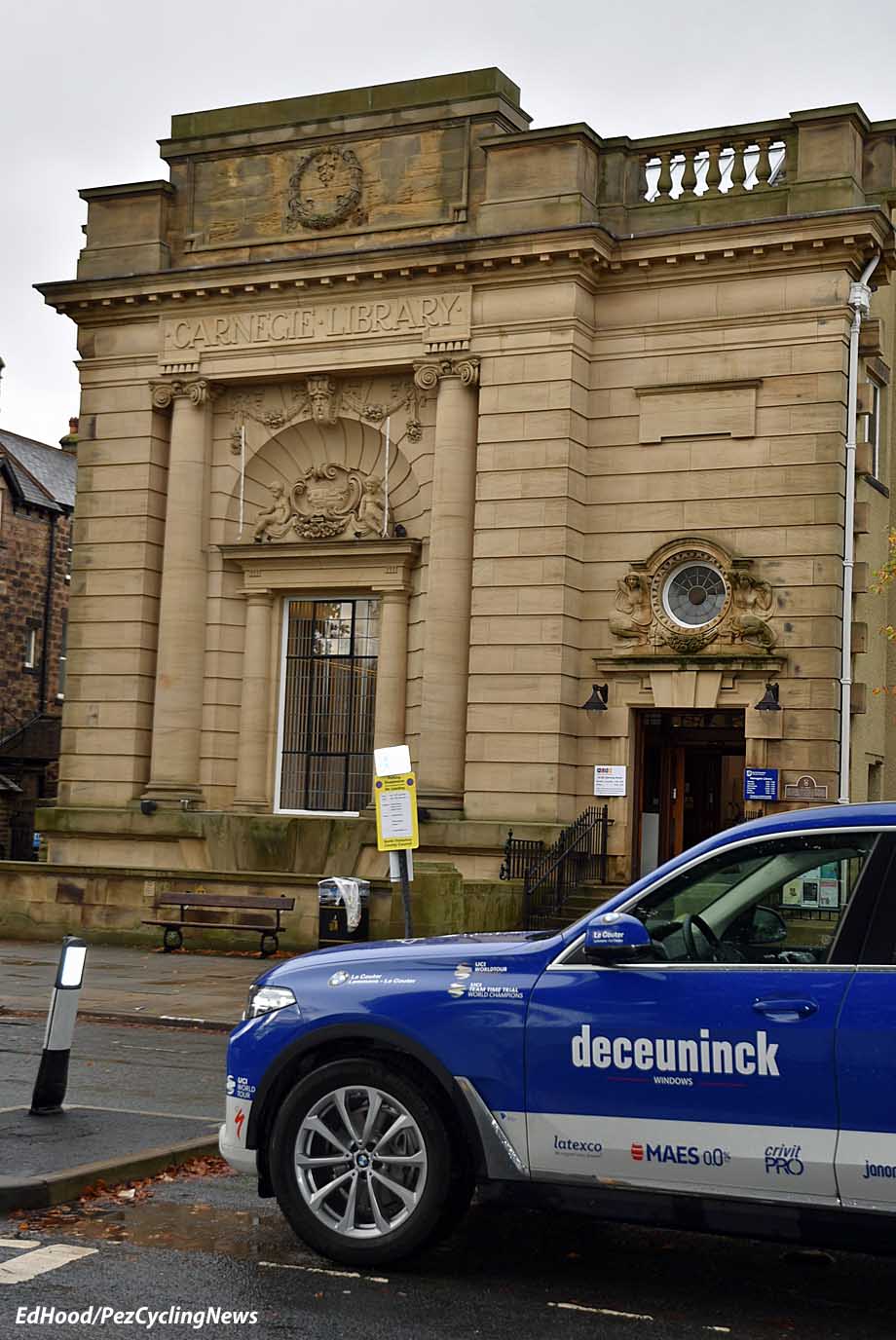 Harrogate and two laps of the urban circuit where the team cars sit cheek by jowl with beautiful old buildings. 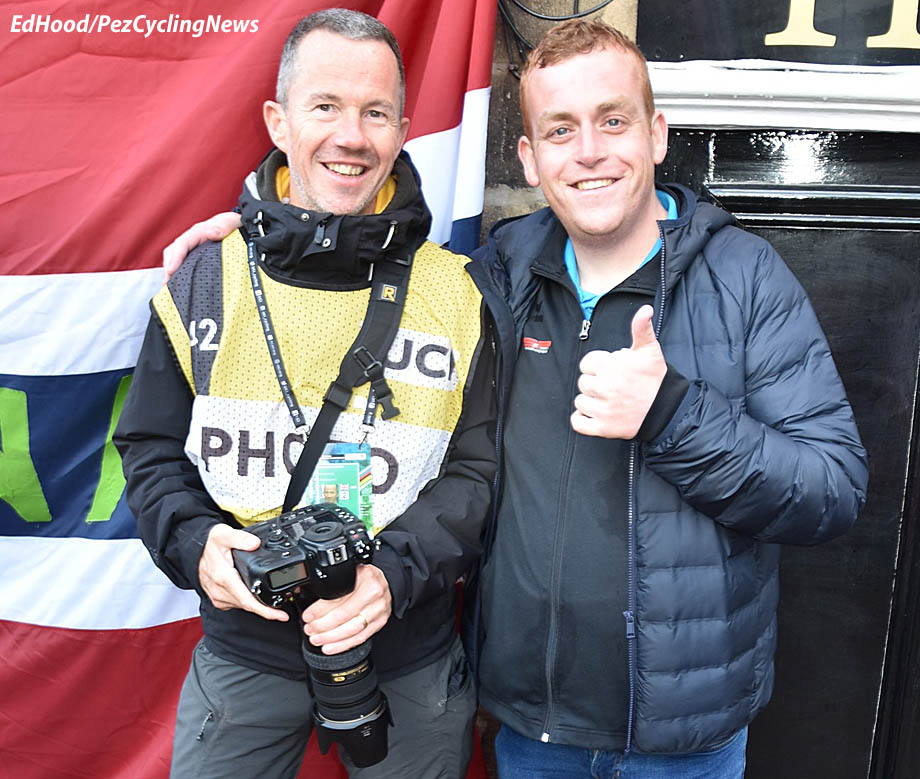 One of the first men we met on the circuit was our old chum, Belgian six day mechanic Brent Van Ballenbergh; “I am drunk, guys – one of our Belgian girls, Julie De Wilde was second this morning, so I had to celebrate!” Brent reckons that Remco is the ‘Joker’ on Sunday for the Elite race, he’ll go up the road with 100 kilometres to go to draw the other teams out on behalf of Messrs. Phil Gil and GVA. We shall see. 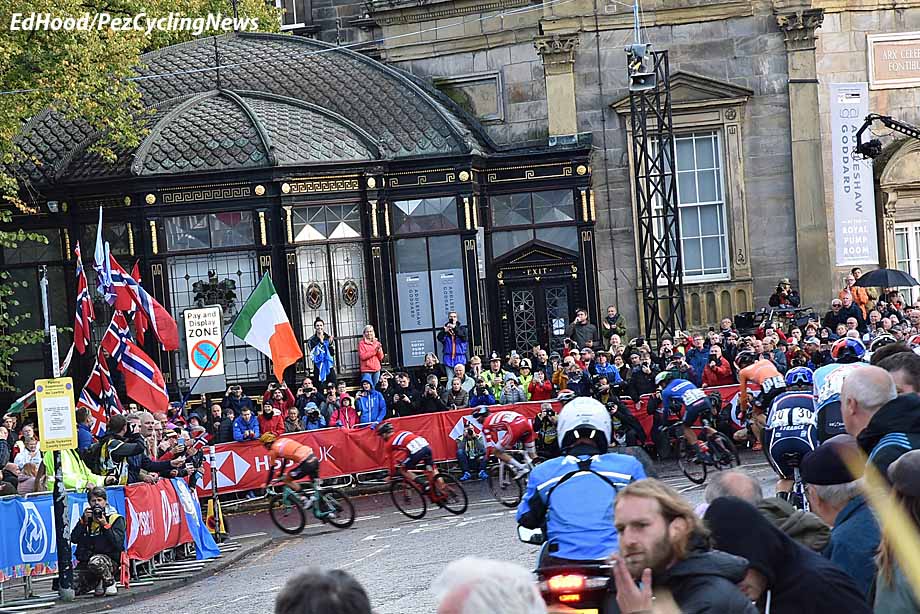 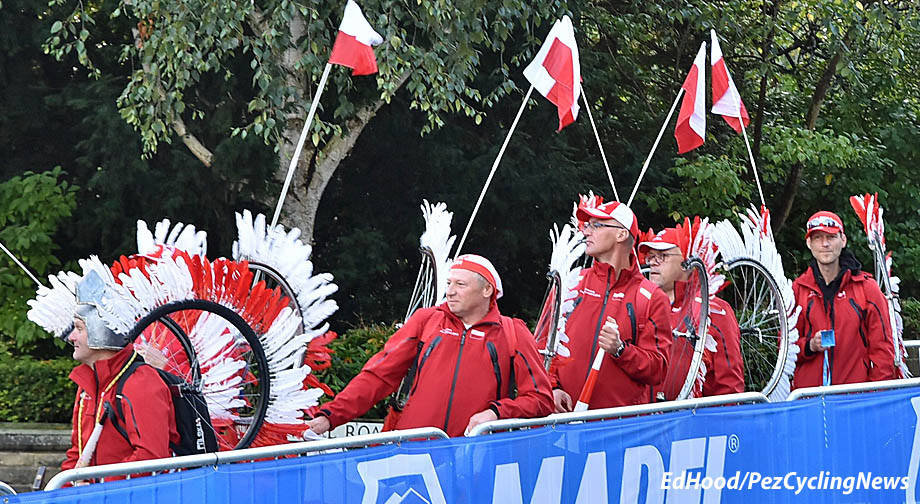 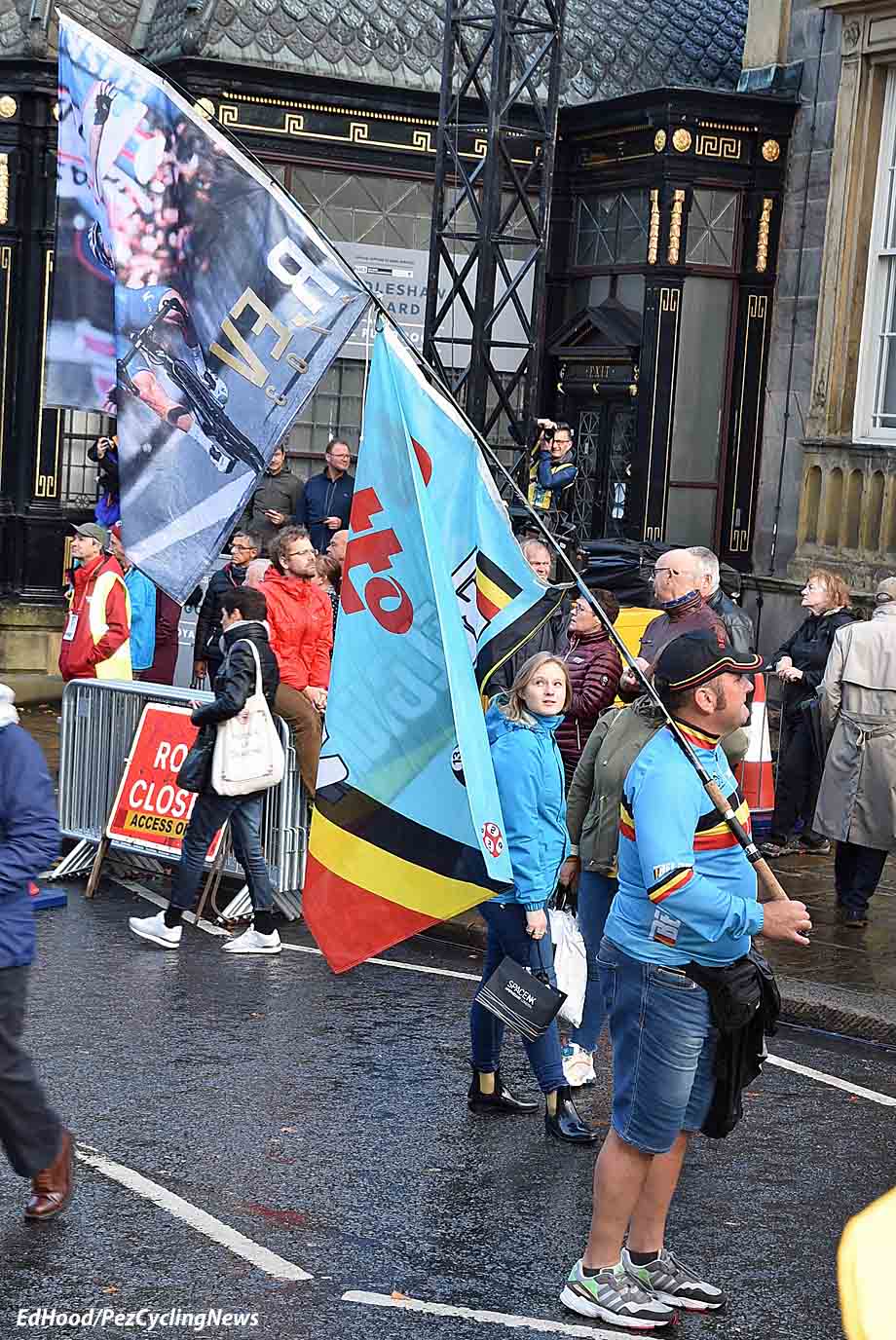 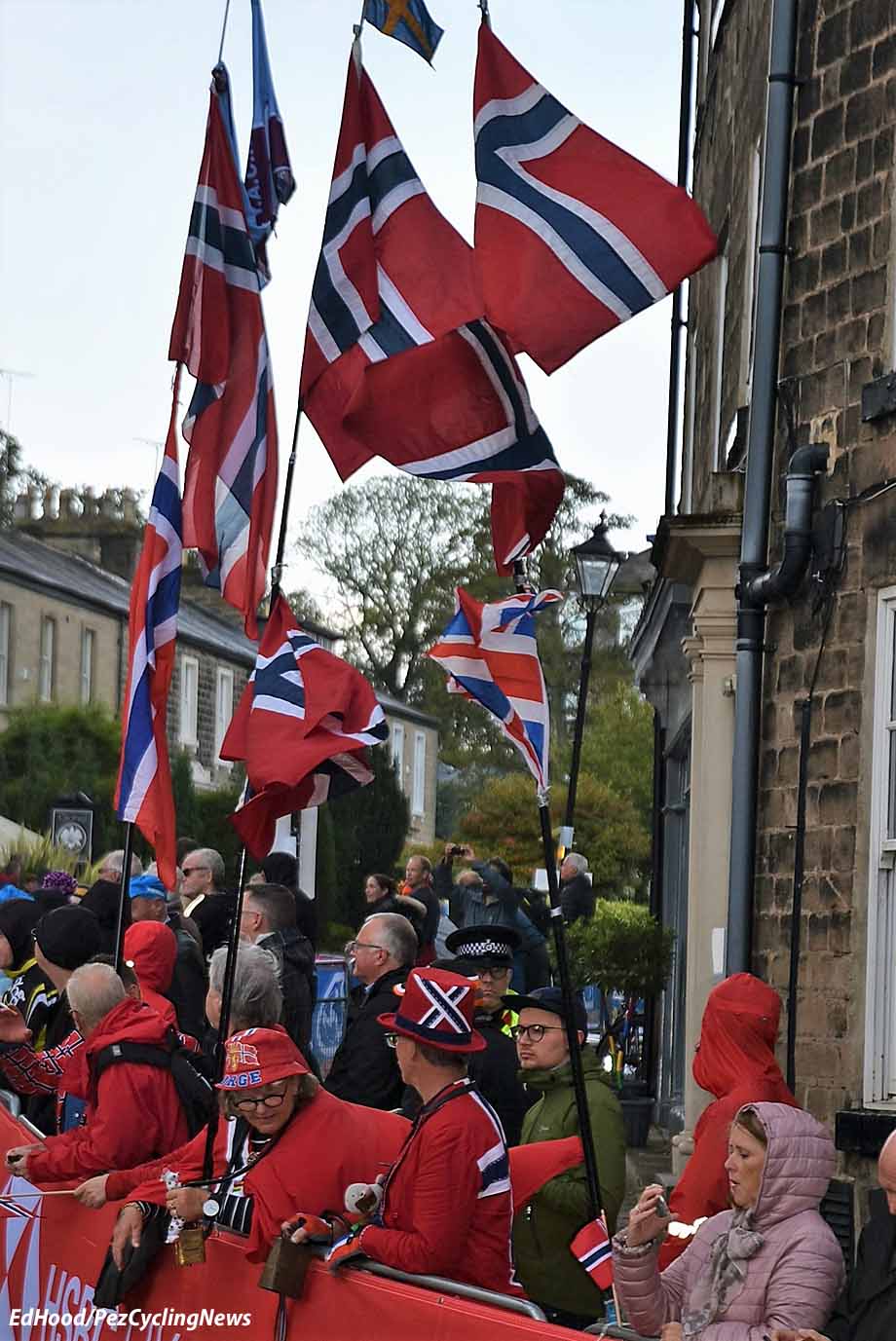 The fans were out in force at the ‘bottle neck’ where the course ‘kissed’ itself – pics of fans weren’t too difficult to shoot but race pics were hard to shoot unless you could get above the melee. The race did two laps of the finishing circuit and the pace was frantic as groups went, came back, merged and split again. The final coming together only happening inside the last kilometre. 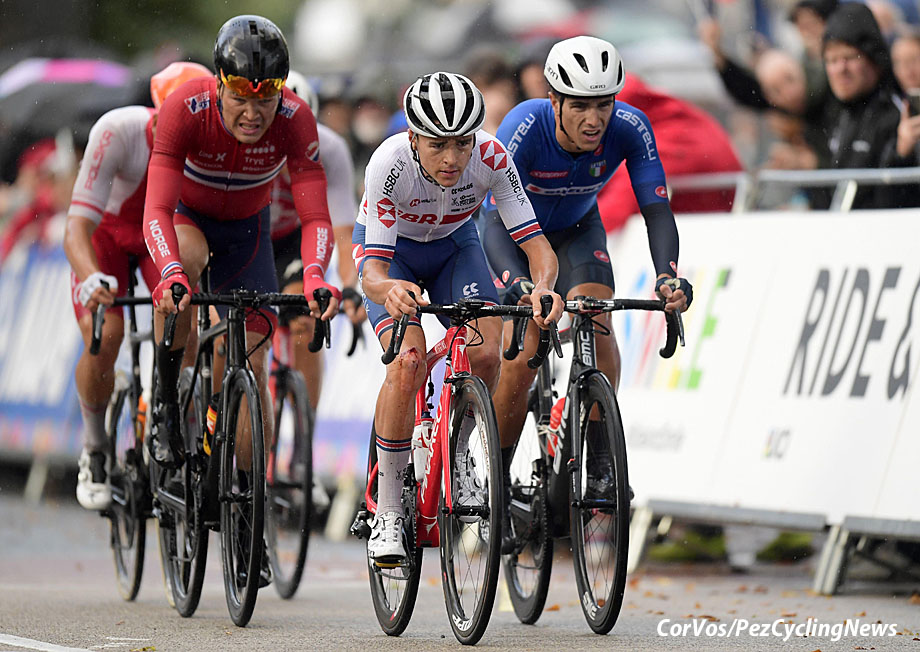 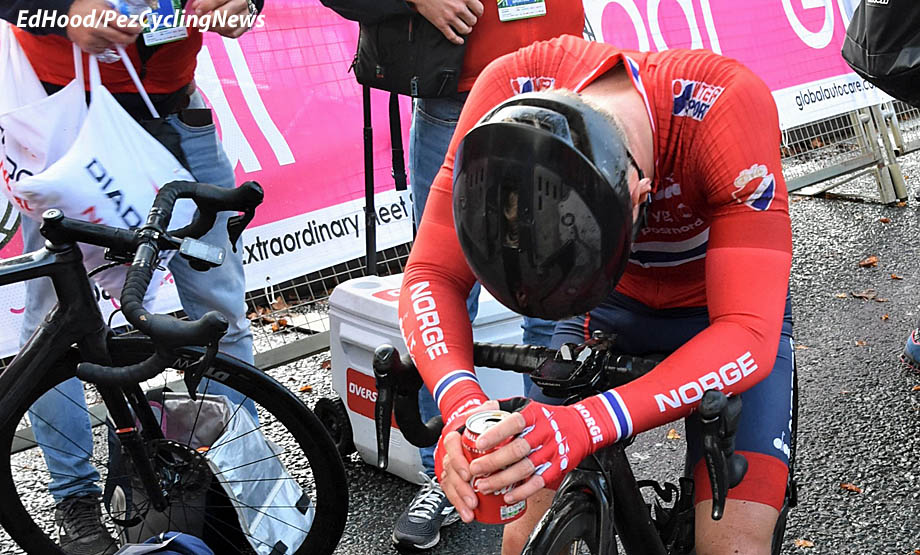 At finish the fact that it had been a tough race was apparent given the state of the finishers, there were a lot of tired lads in the enclosure. 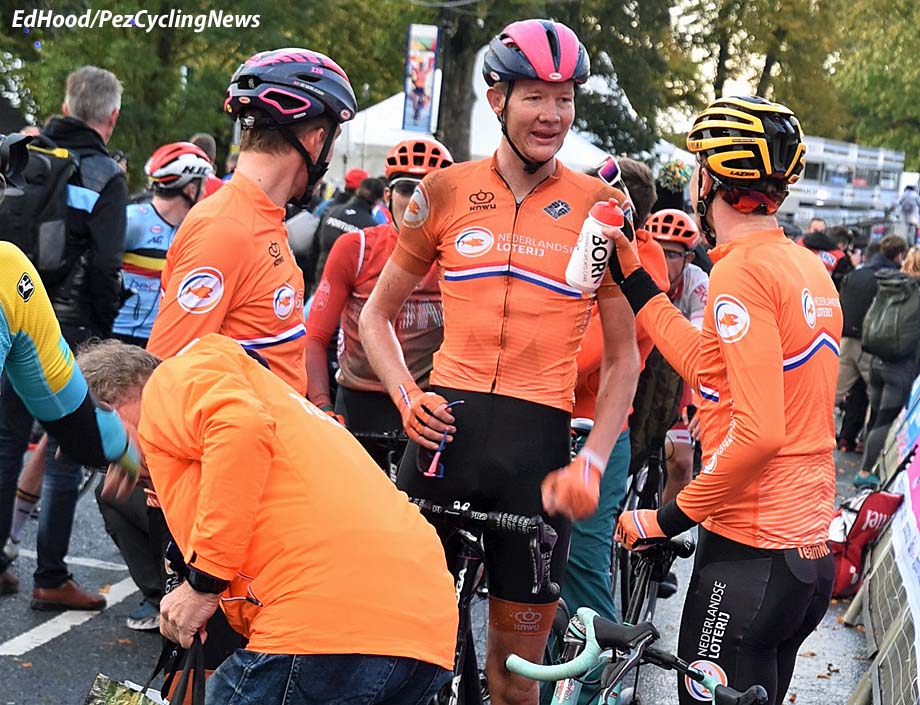 Not the Dutch guys though – they were ‘high’ but would come back down to hit the cobbles with a ‘bump’ very shortly. 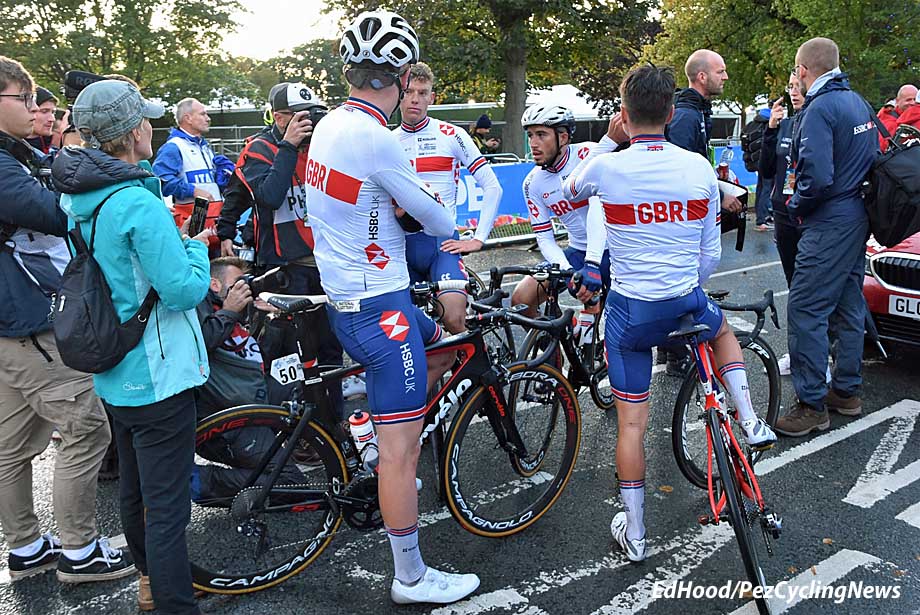 Whereas the GB team were a tad ‘down’ with missing the podium but would cheer up, later. 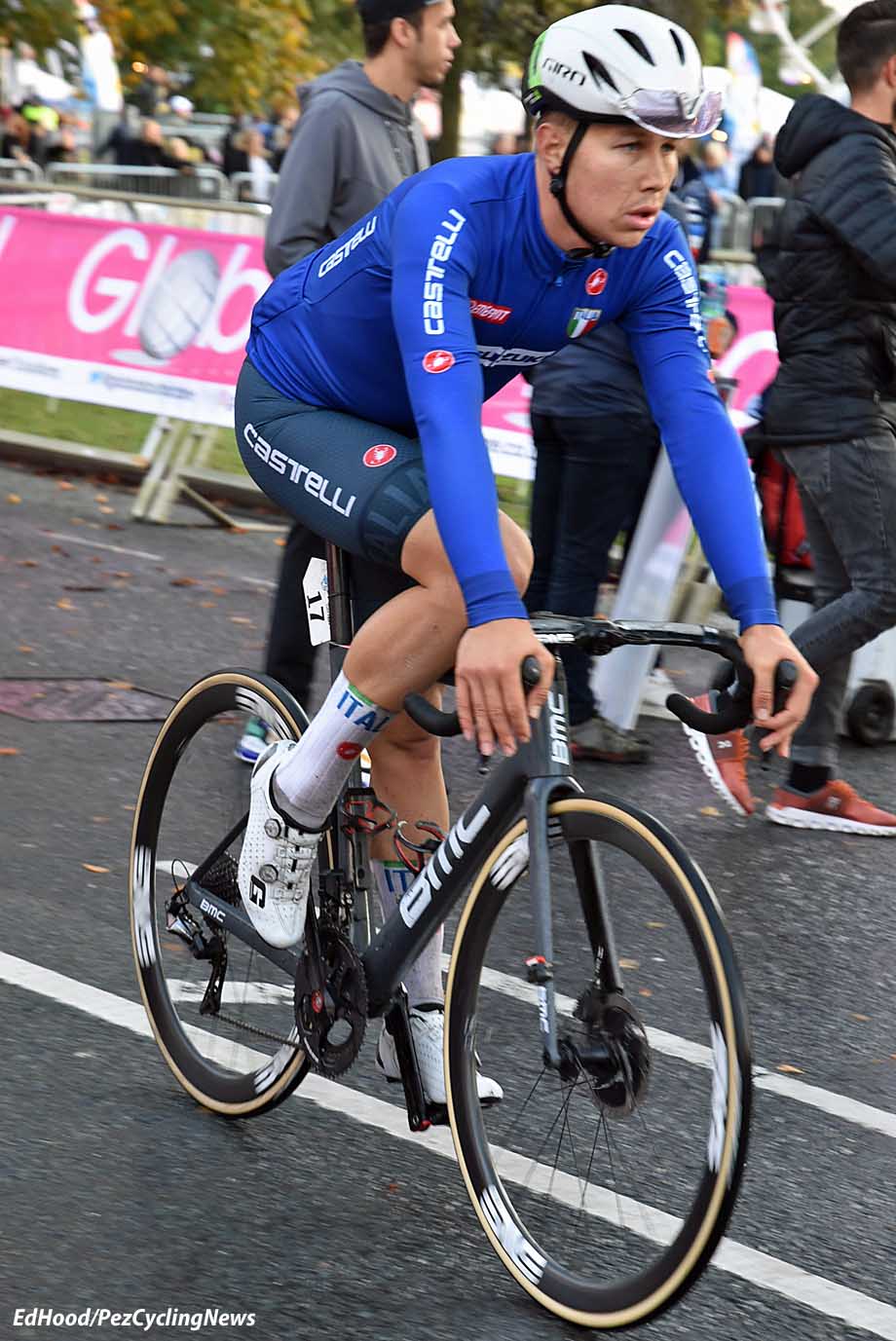 Another man to sample the wrath of the UCI was Alexander Konychev, son of former top Russian professional, Dimitri Konychev, who was also DQ-ed for taking pace. 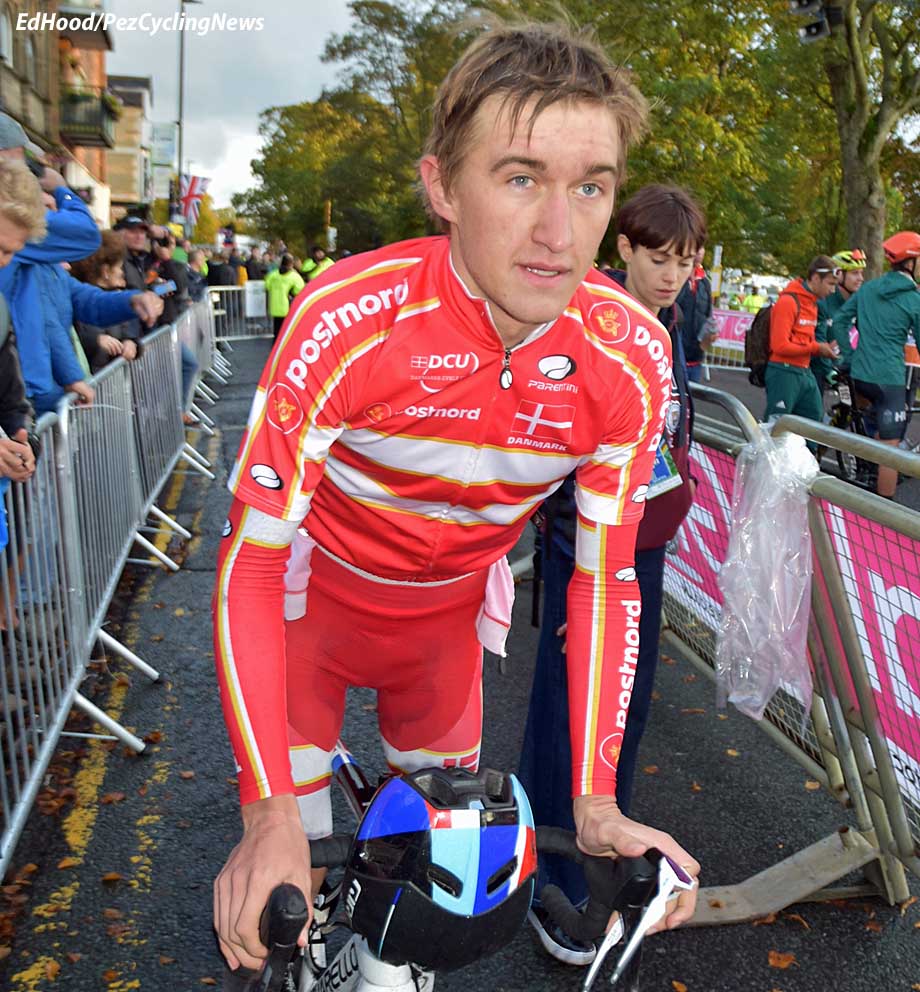 Triple World u23 TT Champion, Mikkel Bjerg didn’t seem too disappointed with eighth place on the day – after all he has a nice three year contract with UAE Team Emirates in a safe place back at home. 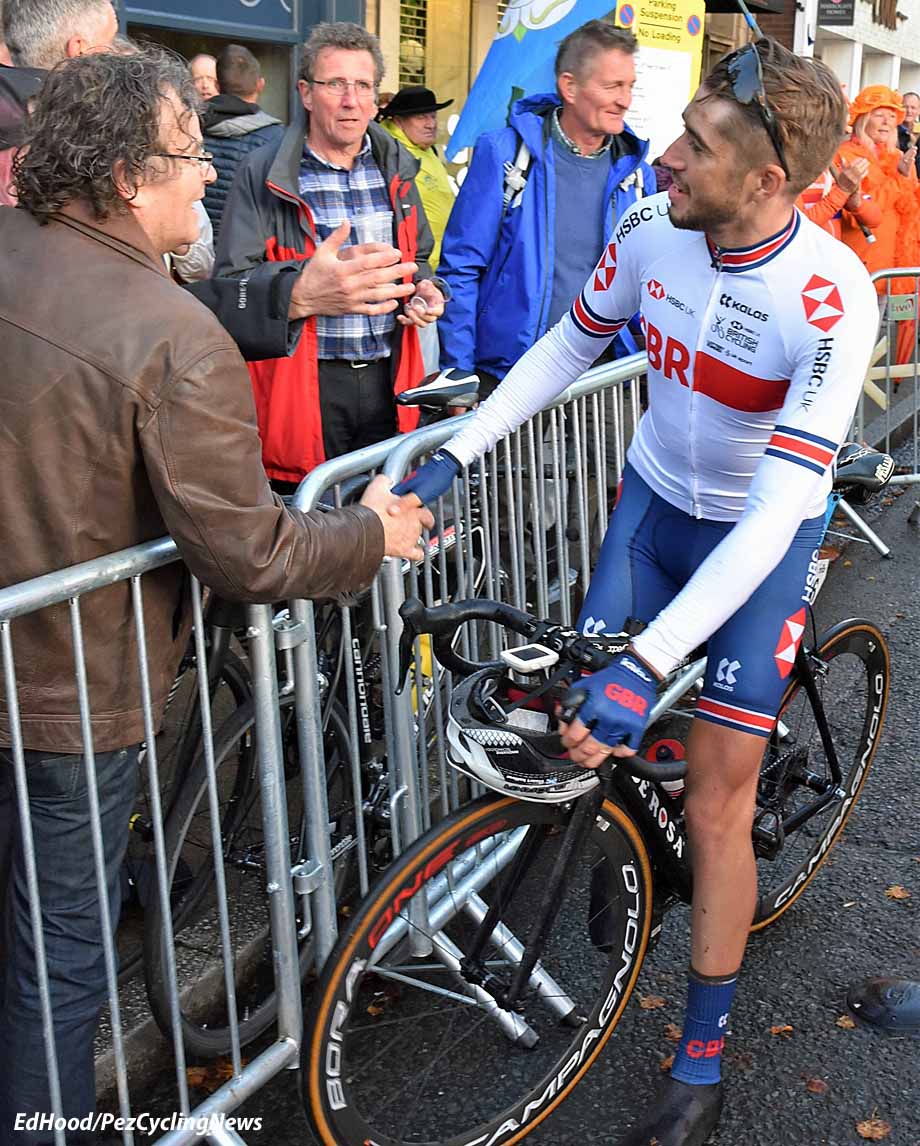 Stuart Balfour still had time for old friends after a hard working day spent mostly, ‘up the road.’ 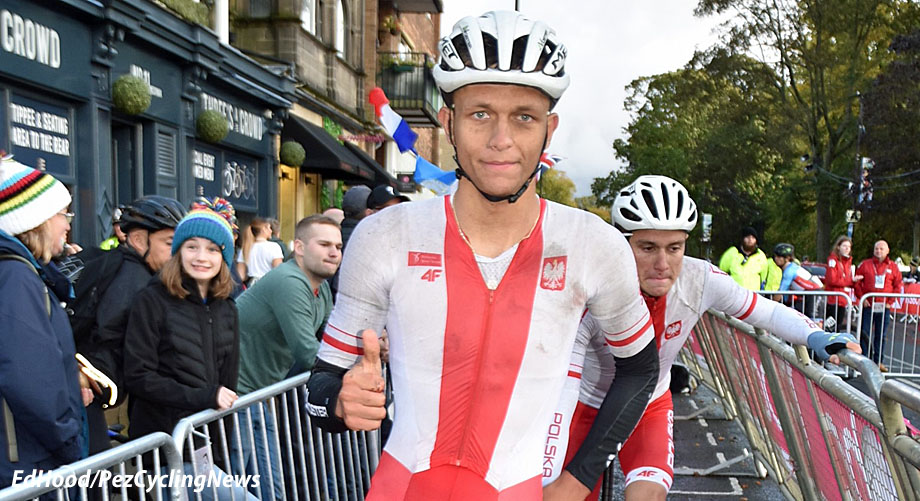 And it’s funny who you bump into – my rider from the six days, Szymon Krawczyk still had time to say, ‘hello’ after a hard day at the office and 72nd place. 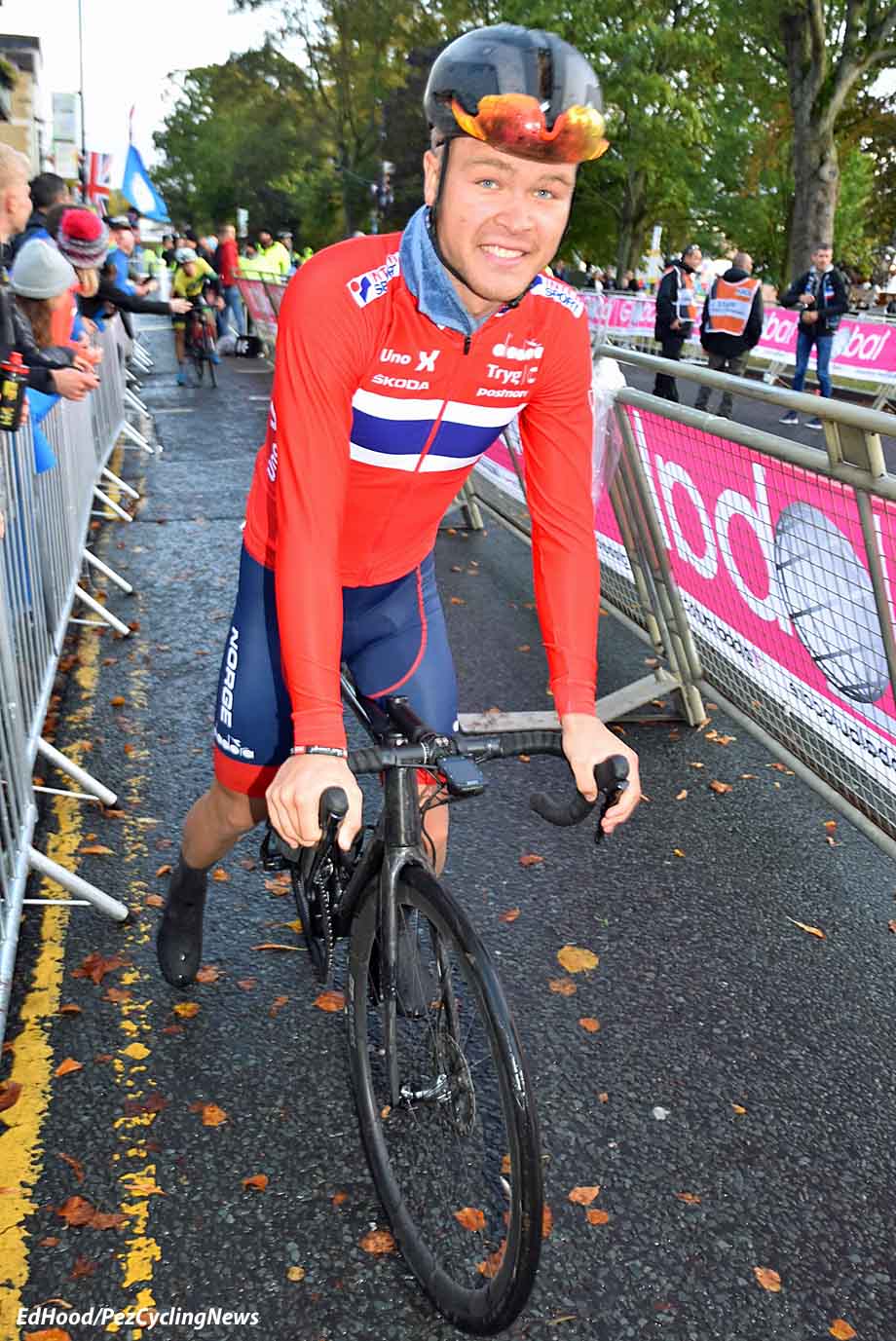 As the sun began to wane, the last riders headed for their showers and the crowds slipped away we reflected that it hadn’t been a bad old day – a Brit on the podium, a Scot well in line for ‘man of the match,’ and not too much rain – not a bad day… unless you were Dutch, that is. 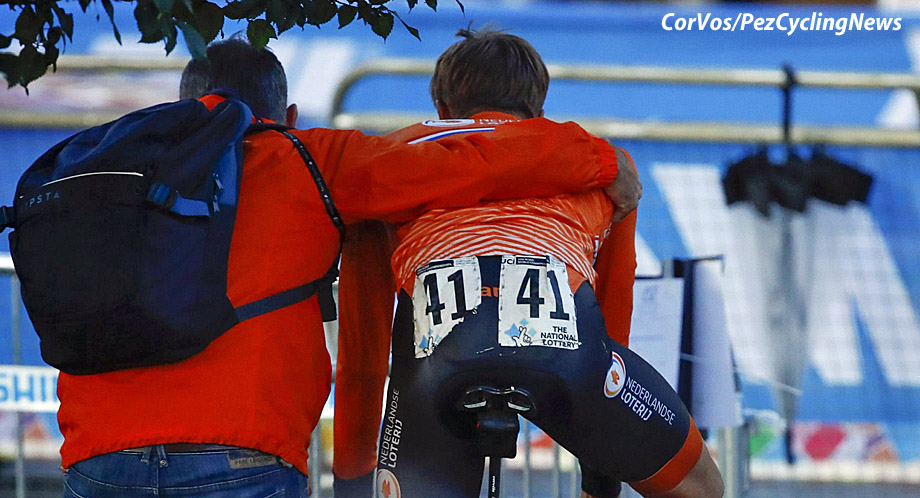 It was November 2005 when Ed Hood first penned a piece for PEZ, on US legend Mike Neel. Since then he’s covered all of the Grand Tours and Monuments for PEZ and has an article count in excess of 1,700 in the archive. He was a Scottish champion cyclist himself – many years and kilograms ago – and still owns a Klein Attitude, Dura Ace carbon Giant and a Fixie. He and fellow Scot and PEZ contributor Martin Williamson run the Scottish site www.veloveritas.co.uk where more of his musings on our sport can be found.