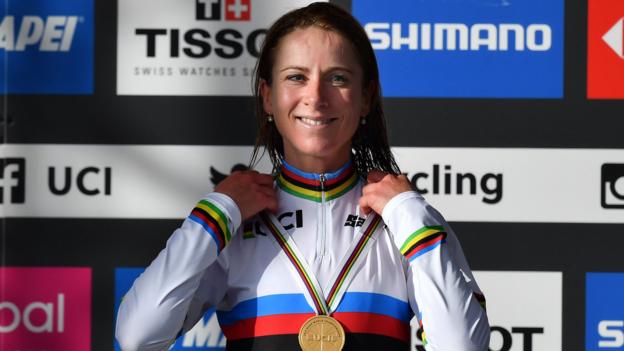 The Dutch rider, 36, attacked on the biggest climb of the day to Lofthouse and quickly built up a decisive lead.

An elite group of chasers, including Britain’s Lizzie Deignan, could not reel her in and Van Vleuten cruised to a spectacular victory in Harrogate.

Deignan was dropped after repeated efforts to animate the chase and finished 31st back in the pack.

It is a third straight women’s world road title for the Netherlands, following Van der Breggen last year and Chantal Blaak in 2017.

“It was not planned. I wanted to go hard on the climb as it was good for our team but I had a gap and my coach just said to continue,” said Van Vleuten.

“This was really crazy – I’m a bit crazy, I train a lot and that helped me to be ready for such a big effort.

“I felt so many emotions on the line – it’s such a big win for me. I’ve been world time trial champion but road champion you get to wear the jersey so much more.”

Van Vleuten has been in dominant form since recovering from a horrific crash while leading the Rio 2016 road race, winning two world time trial titles, the last two editions of the Giro Rosa and the Liege-Bastogne-Liege classic this year.

Yet even by her standards, this was a staggering feat – holding off many of the best riders in the world for the majority of an undulating 150km course from Bradford.

When Van Vleuten kicked clear on a steep section, Deignan and Italy’s Elisa Longo Borghini initially jumped on her wheel before dropping back – both unable to match her tempo but also looking to conserve energy, expecting to be able to chase her down with over 100km to go.

It was already too late.

Van Vleuten had a gap of a minute by the summit and her advantage never dipped below 45 seconds as she powered away over the rolling terrain, leading by 2:37 as she started the final three laps of the finishing circuit in Harrogate.

Deignan, frustrated by a lack of cohesion in the eight-rider chasing group, made several attacks to try to up the pace but was also then forced to respond when others attacked later on.

As a result, an exhausted Deignan, who earlier led the peloton through her home town of Otley, fell back when the USA’s Chloe Dygert-Owen made two canny attacks to go off alone in pursuit of Van Vleuten.

“I’m happy with my performance physically but tactically it was a masterclass in how to get it wrong – I didn’t pull the smartest moves,” Deignan told BBC Sport.

“I should’ve readjusted earlier – I was going for the rainbow jersey and the group I was in was racing for the silver medal, but Annemiek is in a class of her own and I couldn’t match her.

“It was phenomenal. I’m just grateful for the opportunity – what a privilege to race a home world champs and it’s a race I’ll never forget.”

Dygert-Owen, who won the world time trial title in dominant fashion on Tuesday, briefly cut into Van Vleuten’s lead but tired on the final lap and was passed by Van der Breggen and Spratt.

Van der Breggen dropped Spratt with 5km to go, while Dygert-Owen and Longo Borghini held on for fourth and fifth respectively, and pre-race favourite Marianne Vos won the sprint from the peloton to take sixth.