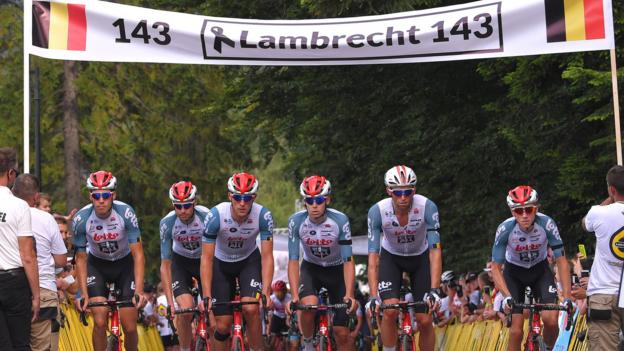 Stage four of the Tour de Pologne was neutralised and shortened following the death of 22-year-old Belgian cyclist Bjorg Lambrecht on Monday.

Lotto-Soudal rider Lambrecht died in hospital following a crash around 60 miles from the end of stage three.

Race organisers chose to reduce Tuesday’s 173km stage to 133.7 km in order to “pay our respects to Bjorg”.

A minute’s silence was held at the start in Jaworna and again at the distance the crash took place.

Wearing black armbands, the six riders of Lotto-Soudal crossed the finish in Kocierz beneath a black arch featuring Lambrecht’s name and race number, ahead of the peloton on a stage designated non-competitive.

“We are all incredibly shaken by this tragedy. Words fail to describe the emotions that we’re all feeling,” said race director Czeslaw Lang.

“I share the pain with Bjorg’s family, his team and all members of the cycling community. At the same time I reiterate our full support. Bjorg Lambrecht will forever remain in our memories as an exceptional cyclist and a great man.”

Lambrecht, regarded as one of Belgium’s most promising riders, was competing in his second season at professional cycling’s top level.

He won the under-23s equivalent of the Liege-Bastogne-Liege race in 2017 and finished second in the U23 World Championships last year.