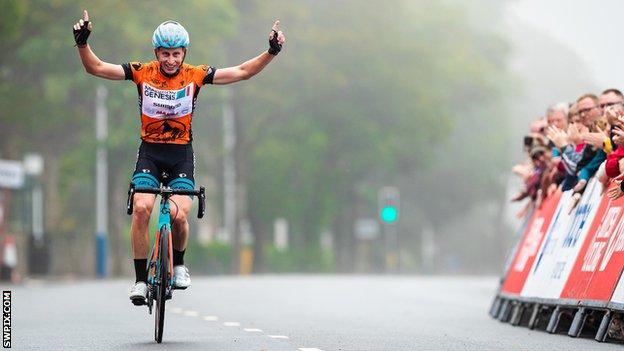 Matthew Holmes sealed an emphatic overall win at the Manx International with a solo victory on the final day.

Holmes attacked late in the torrid conditions on Sunday to beat chasers Edward Laverack and Paul Wright and took the title by 45 seconds.

The Madison Genesis rider, who also won the stage two hill climb, said dropping his rivals was a “great feeling”.

Featuring two circuit races, a hill climb and a showpiece race around the Isle of Man’s mountain course, the four-stage Manx International was the penultimate round of the National Road Series.

Three-time Olympic gold medallist on the track, Ed Clancy, notched up two stage victories as he dominated both circuit stages.

Christian pushed Holmes, from Wigan, hard in the hill climb on Saturday, finishing just a second behind the 25-year-old on the steep ascent of the Sloc.

However, the Manxman trailed in the foggy conditions on stage four as Holmes, Wright, Laverack and Daniel Pearson escaped up the road on the last of three laps of the mountain course.

Pearson was dropped and formed a large chasing group with Christian and five others but they could only mitigate the damage.

Holmes bided his time before attacking with 3km to go and cemented his position at the top of the standings.

With one event remaining, Holmes has moved into the lead of the National Road Series with a 20-point advantage over James Shaw, with 30 points available for victory.

The National Road Series will close at the Ryedale Grand Prix on 18 August.