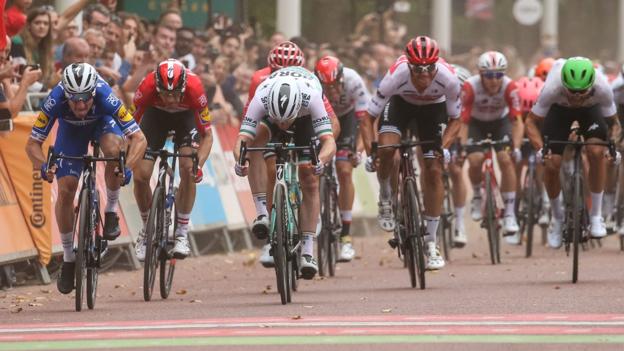 Italian Elia Viviani timed his sprint finish to perfection to capture the RideLondon-Surrey Classic at The Mall.

Britain’s Alex Dowsett claimed the King of the Mountains title.

Dowsett was part of a three-man breakaway at the head of the field for much of the race – which featured five climbs of Box Hill – before dropping out 50km from the finish, but won the King of the Mountains with 32 points, one ahead of Stan Dewulf.

Dutchman Pascal Eenkhoorn fell away with 25km left, leaving Dewulf of Belgium as the sole leader before the peloton finally overhauled him in Wimbledon village with 14km remaining.

The collision with two kilometres to go accounted for several riders in the chasing group – not as dramatic as Saturday’s Classique finale when winner Kirsten Wild was disqualified – but Viviani was not affected as he recorded his 75th road victory.

Australian Caleb Ewan, winner of three stages at the Tour de France, was not in contention and dropped out of the peloton with 75km left.

Viviani paid tribute to his team and said: “We knew it was a chaotic finish but we knew also we can move smart and use the legs. It was amazing teamwork because Michael was third so thanks to the team for sure.

“It is one of the five classics I have in my head to win in my career, now I just miss the two big ones, Milan-San Remo and Gent-Wevelgem so it is good to add another one,” Viviani told BBC Sport.