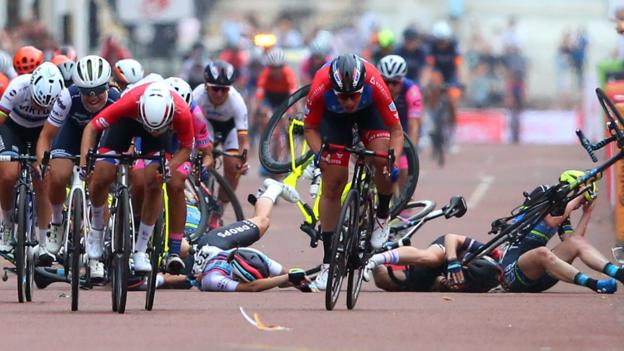 Defending champion Kirsten Wild was disqualified from the RideLondon Classique following a dramatic collision at The Mall.

On the finishing straight, Wild cut across and her back wheel was clipped by Chloe Hosking, resulting in a horrific crash involving many riders.

Wild came through on the inside to win but after a review she was penalised for her sudden change of direction.

Victory was awarded to her fellow Netherlands rider Lorena Wiebes.

Wild thought she had won the race – the richest one-day event on the women’s circuit with a prize of 100,00 euros (£91,500) – for the third time and, interviewed before her disqualification was announced, she told BBC Sport: “I didn’t see the crash, it was behind me, it was really hectic. I was only looking for the finish line.”

Susanne Andersen of Norway dominated the sprint event with three wins and a second to finish 10 points clear on 19.

There was disappointment for Alice Barnes, who finished as the highest-placed Briton last year in ninth.

Just before the start of the final lap, Sunweb’s Leah Kirchmann tumbled and her handlebars caught the back wheel of Barnes.