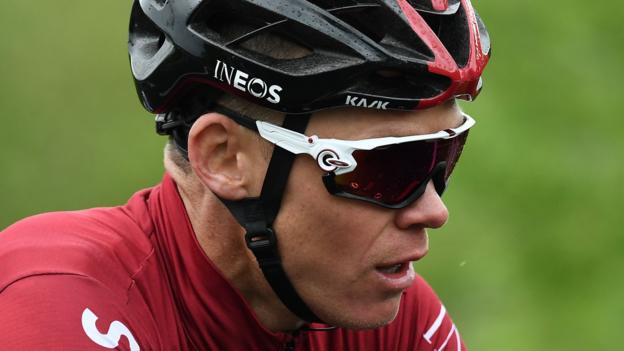 Britain’s four-time Tour de France champion Chris Froome says next year’s Tour is his “only goal” as he continues his recovery from a serious crash during the Criterium du Dauphine.

“It’s safe to say I’m ahead of all the predictions made initially of how long it would take,” Froome told Team Ineos.

Speaking in his first interview since the crash, the seven-time Grand Tour winner added: “The news from the surgeon when he said I could make a full recovery and there’s nothing stopping me – that’s all I wanted to hear at that point. From then, everything was so positive. I was incredibly lucky not to be more seriously injured.

“For me the underlying goal is to get to the start line in 2020 and be at a similar or better position than I was this year. That’s what is driving me at the moment.”

My first question was ‘am I going to be OK for the Tour?’

Froome, who would have been chasing a record-equalling fifth Tour de France title, said he could not recall the “freak accident” in which he removed a hand from his handlebars to blow his nose during a practice ride of stage four of the Dauphine.

But the rider’s instant reaction was to seek reassurance that he could get back on his bike.

“I can remember lying on the ground and the first responders coming over to me,” said Froome.

“My coach Tim Kerrison, Garry Blem, my mechanic, and Servais Knaven, my director, were all in the car behind me. I can remember speaking to them and my first question was ‘can I get back on my bike’ and ‘am I going to be alright for the Tour de France?’.

“They very quickly put that out of my mind. They made it very clear that I wasn’t moving anywhere and I should lie still and that I wouldn’t be carrying on the rest of the race.

“Those first moments were the ones that really hit home and I took it on board that I’m not going to be racing the Tour de France this summer. It almost felt like a scene from Grey’s Anatomy or something. It hit home that there was more going on.”

Airlifted to Saint-Etienne Hospital and facing “at least six months” away from cycling according to his surgeon, Froome – who said he could “barely even breathe after surgery” – admitted the extent and severity of his injuries did not truly sink in until fully explained to him in hospital.

Less than two months on, he has begun weight-bearing exercises as part of a rigorous recovery regime involving three to four hours of physiotherapy and up to two hours of exercises per day.

“It was scary when I came round the morning after the operation and felt how hopeless I was lying in that bed,” he said. “Just 24 hours previously I had hoped to win the Dauphine and it was polar opposites. It was quite hard coming to terms with that.

“It’s been incredible the number of messages I’ve received in hospital, at home and throughout the Tour de France. It’s been amazing and just really heartwarming and motivational for me to see how much I’ve been missed in the race this year.

“It’s motivation for me to want to get back there in the future.”