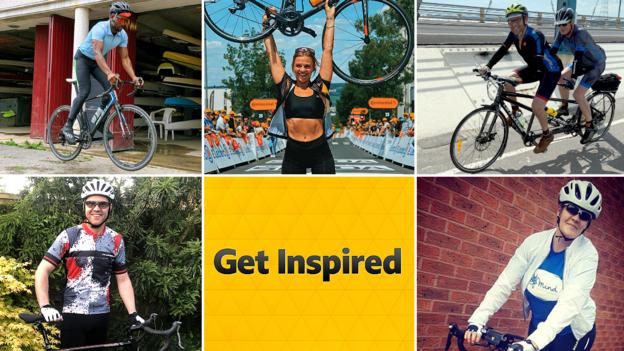 With two elite races, three distances for amateurs and cycle shows, RideLondon declares itself the “world’s greatest festival of cycling”.

Here, five riders taking part in the seventh edition of the RideLondon-Surrey 100 this weekend share their story…

Surfing to saddle – via Love Island

Just days after announcing she will be a surfing ambassador for Team GB during the Tokyo 2020 Olympics, the former Love Island star is preparing to take on the RideLondon-Surrey 100.

“I have another huge cycling challenge coming up in September, so this will be great training for that,” says the 24-year-old.

“Having lived abroad for most of my life, cycling in the UK has given me a chance to explore the countryside.

Laura will be raising money for the homelessness charity Shelter, whose work she describes as “incredibly inspirational”.

“Rowing gives them an opportunity to challenge themselves in a new way and they really love that,” says the 26-year-old.

“They become active, improving their physical, social and mental wellbeing along with developing crucial life skills.”

Though he is a regular cyclist, Tinashe will take on the “hefty cycle” knowing “what a difference the money I raise will make to the young people we work with”.

Double the effort, double the joy

When Jonathan Evans decided he wanted to ride with a visually impaired cyclist and raise funds for the Royal National Institute of Blind People (RNIB), a local Bristol bike charity put him in touch with Tony Whitelaw.

“Communication is important in tandem riding, as is getting used to each other’s cycling style,” says Jonathan. “You go fast on the flat or downhill but going uphill is harder.”

Tony, whose vision is affected by a genetic condition called choroideremia, adds: “I always cycled from being a child but stopped as my sight deteriorated. It was 10 years ago that I first started tandeming.

“As the back rider you really have to trust the person at the front knows what they’re doing. Communication is vital and you also have to be reasonably matched. It’s going really well.”

‘Bipolar doesn’t stop me doing anything’

After a variety of mental health issues throughout her life, Laura Jackson was diagnosed with bipolar last summer and prescribed medication.

“I’ve got my life back,” says the mother of three from Lincolnshire. “I want to encourage others to not let their mental health struggles stand in their way. You can still achieve your goals.”

Laura, who is taking part in her first RideLondon-Surrey 100, says: “I love cycling and find it helps with my mental health.

“This is a big challenge but a good opportunity to support Mind, the mental health charity. The work they do is really important.”

After Luke Elkin’s first child Liam required heart surgery in the first months of his life, the Paediatric Intensive Care Unit (PICU) at Southampton was on hand to save his life.

With Liam now a healthy seven-month-old, Luke wanted to raise money for Friends of PICU.

“I love cycling so this seemed the perfect way to support them,” says the 29-year-old, who only bought a road bike earlier this year.

“I’m really looking forward to the sense of achievement when I get that medal but, more than that, I feel like I’m taking the worst thing we’ve been through and turning it into something positive.”